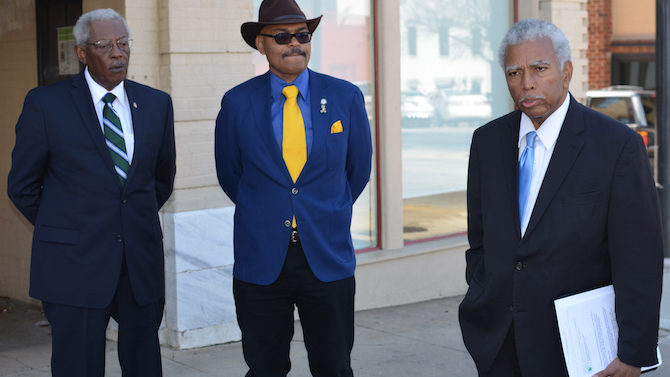 Fred Smith Sr. vividly remembers the afternoon of Mar. 7, when he tried to enter Oconee Hill Cemetery. The gate was locked, and a U-Haul truck carrying remains of at least 30 African-American slaves was inside the gate. When he tried to peek through the gate to see what was going on, Smith said workers parked a truck near the gate so he couldn’t see anything.

“I thought it was kind of strange, them locking the gate so I couldn’t go in,” said Smith, co-chair of the Athens Black History Bowl Committee. “There were funeral homes that would have transported the remains, they didn’t have to put them in a U-Haul truck. A U-Haul truck! And then the sign the university put up says they were ‘respectfully reinterred.’”

Smith was one of several panelists who participated in Saturday’s “Conversation About Slavery at UGA and the Baldwin Site Burials” in the Richard Russell Special Collections Libraries building. Others included Athens native, historian and former state labor commissioner Michael Thurmond, Oconee Hill historian Charlotte Thomas Marshall and Linda Davis, a school board member and an advocate for the restoration of Brooklyn Cemetery.

From UGA there were anthropologist Laurie Reitsma, Scott Nesbit, a professor of digital humanities in the College of Environment and Design, UGA history professors Carolyn Jones Medine and Chana Kai Lee, and Valerie Babb, director of the Institute for African American Studies and an English professor. Babb moderated the session.

The panel members discussed the part each has played since 105 burial sites were unearthed in November 2015 from what was the Old Athens Cemetery. It was the first and only cemetery for the town, at the intersection of Baldwin and Jackson streets. UGA is expanding Baldwin Hall, built on top of part of the cemetery. Of the remains found, 30 of have been identified as African—and therefore, as slaves—through DNA analysis.

The grounds of the Old Athens Cemetery were first disrupted in 1938, when UGA received money from the Roosevelt Administration and constructed 17 new buildings, including Baldwin Hall, Smith said. Some graves were removed, others were paved over, the fieldstones marking their sites gone. One story says the remains were moved to the Athens Water Works north of Newtown; another says they were boxed up and taken to the paupers’ cemetery on Nowhere Road, where they were dumped into trenches.

This time, on the advice of the state archaelogist’s office, the university opted to reinter the remains at Oconee Hill, the closest cemetery to where they were found.

The recent finding of slave remains, and the lack of input from Athens’ African Americans on where to reinter them, have outraged Smith, as well as other community members. They wonder why UGA didn’t consult any local black people about where to bury them. “If you can’t get outraged about someone destroying your great-grandparents’ graves, what can you get outraged about?” Smith asked Saturday’s audience of about 350 people.

Smith said he’s excited about the research UGA faculty members, students and staff plan to do about the sites and the role slavery has played at the school. Nesbit said his students and he have conducted research showing slavery was a vital part of UGA and UGA played a vital role in defending the institution of slavery. Slaves were at the heart of UGA, though Nesbit said he hasn’t found an indication UGA owned slaves, as did other institutions. He said the university hired slaves to maintain the campus buildings, carry water, cut wood and work as servants to students. (Smith later corrected Nesbit, saying UGA contracted with slave owners to use the slaves; it didn’t hire slaves directly.) One next step is to learn more about the day-to-day lives of these people.

There’s a national group, Universities Studying Slavery, based at the University of Virginia, whose website says, “USS additionally allows participating institutions to work together as they address both historical and contemporary issues dealing with race and inequality in higher education and in university communities as well as the complicated legacies of slavery in modern American society.” The University of Georgia isn’t listed as a member.

Thurmond noted that it’s “important to perfect and correct the record,” saying that if not for Fred Smith, there would have been no conversation on Saturday. He said that “now is the time for an honest conversation to be had.” Part of research is to acknowledge the contribution slaves made to the university. Thurmond urged the university administration to utilize the moment and have a difficult conversation about fairness, equity and prosperity.

Nesbit said the best efforts of institutions to come to grips with a past slavery association have involved community members and the descendants of enslaved people as well as university officials. UGA history professor John Morrow wondered how to get the UGA administration to talk with local black folks—an issue that has worried him for years, as it has Thurmond.

Babb said the African American Institute and the UGA History Department are going to create an initiative with research, events and digital accessibility, “so that this won’t happen again. We’re trying to undo the awkward silence that has happened in the past.”