Black-Owned Businesses Are Endangered in Athens 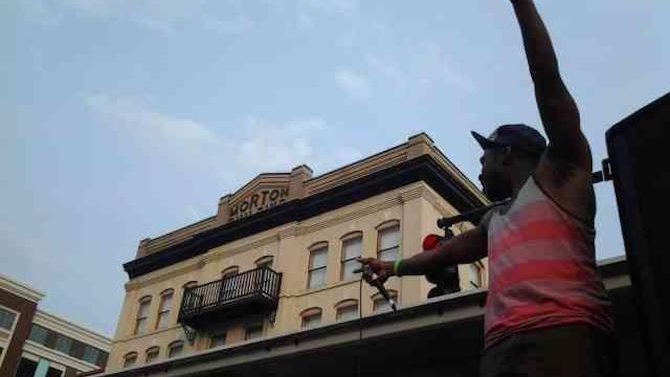 “There were a lot more businesses before integration than after,” Walter Allen, publisher of Zebra magazine, said at a Federation of Neighborhoods panel discussion Mar. 13 on the topic of black-owned businesses.

At any given time, there were 25–30 black-owned businesses around the Hot Corner (Washington and Hull streets), including several insurance companies on the upper floors of the Morton Theatre, Allen recalled. Hancock Avenue had a doctor’s office and a furniture store, and The Bottom neighborhood (where Bethel Homes now stands) had a number of bootleggers and pool halls, including one owned by famed bluesman Neal Pattman.

But when African Americans were allowed to shop in white-owned establishments, many black-owned businesses found they were unable to compete on price with larger retailers, explained artist Broderick Flanigan, who interviewed current and former Hot Corner business owners for a University of Georgia project.

Flanigan owns a studio in Triangle Plaza, near Avis Clay’s hair salon. Clay went into the hair business after quitting her property-management job because her boss discriminated against her, she said. Another panelist, Lora Turner Smothers, runs a private school, Freedom to Grow, in Hull.

Many of the challenges they face are the same as any other business: Clay cited competition from home-based stylists with less overhead, while Smothers said the economic decline of the middle class is cutting into her school’s potential clientele.

But as with everything else, race also plays a role. Allen said he can’t charge the same advertising rates as magazines that he outsells but that appeal to a white demographic. “When you’re in the black media, the mass media… get the chicken, and we get the chitlins,” he said.

Very few black-owned businesses downtown are successful anymore, Allen said, citing Athens native and former NFL player Dunta Robinson’s shoe store, which only lasted “a couple of years” despite his deep pockets. African Americans tend to stay away from downtown because many businesses don’t welcome them, according to Allen.

“It’s almost like we don’t want to cater to black people in downtown Athens because it might drive our white customers away,” he said.

Flanigan is compiling a list of black-owned local businesses, available online at MOBAthens.com. He noted that the black unemployment rate is about 15 percent, compared to 5 percent for the city as a whole.

“If black businesses are successful, they can help chip away at that large unemployment discrepancy,” he said. And, Allen said, entrepreneurship may be the only option for African Americans with a criminal record.

Beyond the financial, African Americans lost part of their culture when black-owned businesses declined, Smothers said. “As a millennial, I kind of feel like our generation is isolated, and we don’t have that sense of community,” she said.