How Republicans Have Sliced and Diced Athens 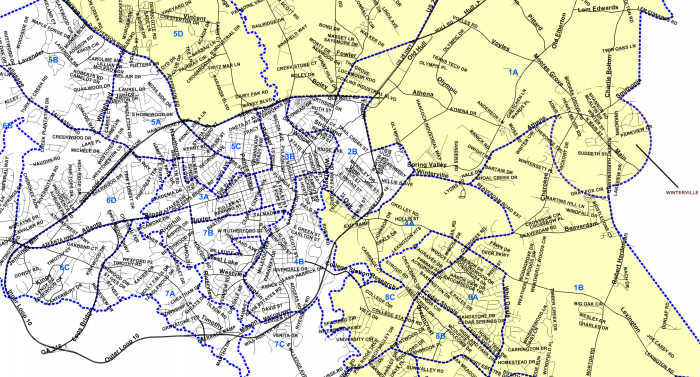 Late last week, Georgia Republicans passed a bill shuffling around a few metro Atlanta House districts to help Republican members who barely won re-election last November. At the same time, two bills turning over the responsibility of drawing legislative districts to a nonpartisan commission continue to languish. That’s too bad. Just look at what’s happened in Athens, which has been kicked around by Republicans looking for an electoral edge for the past 12 years.

Of course, both parties do it whenever they’re in power. In the early aughts, Democrats drew an absurd map trying to cling to their majority, which was thrown out by a judge. They also gerrymandered a frog-leg-like district linking Savannah, Augusta and Athens in an effort to cobble together Democratic voters, but Republican Max Burns won the seat.

Athens-Clarke County Commissioner John Barrow, a Democrat, knocked off Burns in 2004, and Republicans (who now controlled state government) responded by removing Athens from the district. Barrow moved to Savannah, and Athens moved into a mostly rural, conservative district.

In 2006, Clarke and Oconee counties were both represented by a single state senator in a district that was split about 50-50. Sen. Brian Kemp ran for secretary of state, and Republican Bill Cowsert and Democratic state Rep. Jane Kidd were vying for the open seat. Republicans cracked Athens in half, putting part of Clarke County in a very conservative neighboring district and adding heavily Republican Walton County to Kemp’s. Cowsert cruised to victory.

Athens still had two Democratic representatives in the state House, but that would change in 2012, when Doug McKillip switched parties. To prop up their new convert, House Republicans shifted part of his Democratic district into Republican-majority Oconee, Barrow and Jackson counties. It worked—sort of. Democrats didn’t contest the new district, but they did line up behind Republican Regina Quick, who ousted McKillip in the primary.

The blue and orange districts, which extend into conservative surrounding counties, are held by Republicans.

Now you know why, in a state that’s roughly 45 percent Democratic, Republicans in the legislature outnumber Democrats by two to one, and the GOP holds 10 of 14 congressional seats. “Districts have been drawn to be hyperpartisan,” state Sen. Elena Parent (D-Atlanta) said when introducing a bill creating a nonpartisan redistricting commission in January. Like others before it, the bill—which would turn redistricting over to a commission largely appointed by the chief justice of the Georgia Supreme Court—is doomed to fail.