An Early Look at the 2018 Race for Athens Mayor 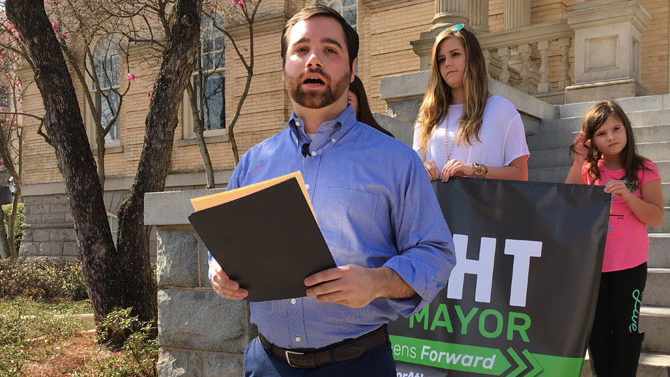 Knight said he wants to “see a new generation take over the helm… We’ve been stuck in a rut the past 20–30 years.”

His top priority, he said, is economic development—high-paying jobs to alleviate the city’s 30-plus percent poverty rate. He said he would focus on recruiting businesses that will pay a living wage, although he hasn’t settled on a figure of what a living wage should be. (It’s $10.17 an hour in Athens, according to MIT.)

“We need to have real conversations with employers, not just about coming here, but about what it means to be part of the community, whom they should be hiring, wage amounts,” he said.

• “equal rights” for African Americans. (He is in favor of the city-run civil rights committee proposed by the Athens Anti-Discrimination Movement.)

• more resources for the Hispanic community, including possibly declaring Athens a “sanctuary city,” although that’s illegal in Georgia.

• a more transparent government. Knight recently spoke in opposition to the Mayor and Commission’s moratorium on new downtown bars and apartments, saying it should have been vetted by the public. “I believe in a government that no longer makes decisions behind closed doors and is no longer perceived as anti-business,” he said.

This being Flagpole, we had to ask him about alternative transportation. He’s “100 percent in favor” of more sidewalks and bike lanes. As for Prince Avenue specifically, “I think there’s a lot to figure out,” he said.

Policy details were scant during his brief announcement and a Q&A session with reporters. But that’s why Knight said he announced so early—so he has time to meet with various groups and learn the issues.

Knight studied agribusiness at UGA and has lived in Athens for seven years. He is a founding partner at HW Creative Marketing, and was recently named the Athens Area Chamber of Commerce’s representative to the Athens Downtown Development Authority. He also serves on the boards of Extra Special People, United Way and Envision Athens. He is a graduate of LEAD Athens and is active in the Athens Rotary Club, according to his official bio.

With Mayor Nancy Denson term-limited, the 2018 field could be a crowded one. Five candidates ran in 2010, the last time the seat was open.

“I’m not going to be coy, I am certainly intent on running for mayor, but I have two jobs that need my attention now,” Girtz said. “People are just getting over their election hangover, and I don’t intend to be their hair of the dog.”

Another rumored candidate, Harry Sims, the dean of the commission with 25 years of service, said he will be announcing his intentions “shortly.”

2014 candidate Tim Denson, president of the progressive political group Athens for Everyone, also said he is mulling a run but is not ready to make an announcement. His decision could hinge on whether progressives decide to unite around one candidate (presumably Girtz) to avoid splitting their vote like they did in 2010, when acrimony between Gwen O’Looney and Spencer Frye supporters helped propel Denson to victory.

Sources say that Dexter Fisher, director of the UGA Facilities Management Division, may be running as well. Fisher did not return a call seeking comment last week.

Girtz’s candidacy would open up his District 9 seat, representing Pulaski Heights up through the North Avenue/Danielsville Road area. Ovita Thornton, who represents much of the same area on the Clarke County Board of Education, is likely to run. Another potential candidate is Newtown resident Tommy Valentine, a Democratic activist and UGA PhD candidate in public administration.

Should Sims run, his District 2 seat may be more difficult to fill. Sims was ready to retire in 2012 and only opted to run again after no one else stepped up. His East Athens district is changing demographically, and it will be interesting to see if it remains in African-American hands. Despite promises of more minority representation, the commission district maps Republicans in the legislature drew in 2012 over local objections could leave Athens, which is 26 percent black, with an all-white governing body.