This Week in Trumpkinland: He’s Not Going to Keep His Promises 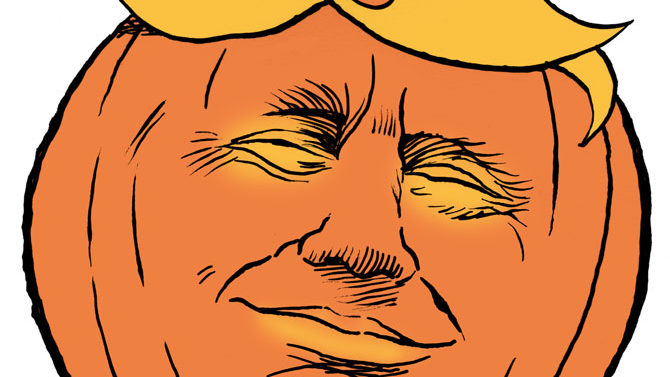 Let’s talk about how Trump isn’t gonna be able to deliver on much of anything. How much are we discounting that this guy sucks at his job? He’s scary, of course, but he’s not some kind of mastermind. He’s like legit not very smart. I’ve heard people try this “he’s crazy like a fox” business, which I guess is supposed to mean that he’s sneaky smart and that’s why it usually looks like he’s dumb. His intellect is not a super-secret sleeper cell that snuck into the White House in the Trojan horse of a stupid person. He’s just tragically deficient. He will screw up at this.

Here are some immediately apparent ways that he’ll fail according to what he promised his supporters:

• The “wall”: First off, there won’t be the grand wall Trump promised, and Mexico ain’t paying for shit. Trump has already downshifted to “they’ll reimburse us.” Whatever, guy.

• All the promised jobs: Trump is somehow convinced that he can tweet at some company about moving jobs to Mexico and suddenly 40 years of globalized corporate capitalism for which third-world wage slavery is the ideal reverses course and decides that profits aren’t important anymore. Also, his “$1 trillion infrastructure plan” is a sham.

Trump enters office with the lowest approval rating of any incoming president since they started taking that poll. He lost the popular vote by 3 million votes. In every other functioning democracy (no other country has an electoral college), Trump would’ve lost in November. Americans don’t much like him, and he’s not good at his job. This won’t end well.

The thing Trump is good at, however, is reflexively shifting blame onto anyone besides himself. He’s also really good at being a racist. That’s a frightening combo. As the shine starts to wear off on the Republicans’ pick, and it becomes apparent to all that he’s failing to deliver on all the grandness he promised, it’s very much in his character for Trump to try to blame one of his go-to scapegoats: immigrants of color, minorities generally and vocal opponents. What’s really scary is that his followers tend to believe him.