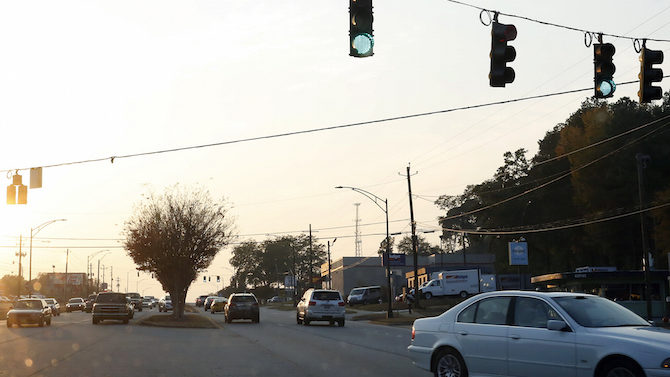 Valdon Daniel, who grew up in the Broadacres public housing complex and now serves on the Athens Housing Authority board, remembers when people who lived on both sides of Broad Street used to walk everywhere. They didn’t have a choice—not many of them had cars—but that was OK, because everything was within walking distance, and walking was easy.

Then the state Department of Transportation widened Broad Street to accommodate the rise of the automobile and the strip-mall development lining the corridor, and crossing it became more difficult. There are no crosswalks except at traffic lights, which are few and far between from a pedestrian’s point of view, and no refuge for people once they get in the road. The Hancock-Broad intersection has no crosswalk at all. This divided the neighborhood.

“I’d jump up and down if someone would put a median on Broad Street and put some trees on it and make it look like people live on either side, and it’s not just this big commercial corridor,” said school board member Linda Davis, who also grew up in the area. “Making it walkable would be amazing.

“It’s an interesting place, and it could be such a fun place to walk and bike,” Davis said. “But I think with the structures we put in place, we made it kind of isolated, less fun and less safe.”

Davis and Daniel serve on a committee—a partnership among the Athens-Clarke County government, the Clarke County School District, the AHA and the Athens Land Trust—that’s drawing up a master plan for the West Broad neighborhood (roughly, the area between Hancock Avenue, Alps Road, Baxter Street and Milledge Avenue).

In part because of the divisions created by roads, West Broad is actually several different neighborhoods, according to consultant Bob Begle—West Hancock north of Broad and south of Broad, Rocksprings to the east and Magnolia Street to the west. “These are areas that have a lot of overlapping issues, but are somewhat different, too,” Begle told the committee at a Nov. 7 meeting.

Begle outlined how the area has changed: It was all farmland until 1948, when Broadacres, at Broad and Hancock, was built. Private homes followed in the 1950s, then student housing and commercial development. The neighborhood is home to four schools, the library, Rocksprings Park and St. Mary’s Hospital. It has its issues these days—only 32 percent of homes are owner-occupied, 32 percent of buildings are “substandard,” and while crime has subsided, it’s still a concern, according to Begle—but because of its location and amenities, it’s a prime target for gentrification. The goal of the West Broad group is to improve the neighborhood while also protecting it, to “make sure we’re not improving things only for the new people moving in,” Begle said.

During a public forum in September, residents named walkability as one of their top concerns. While GDOT controls Broad Street, there are smaller things that could be done—sidewalks on Magnolia, for example. Alps Elementary students can’t get on Baxter directly, and once they’re on Baxter, the sidewalk to the library is dangerously close to the street. Sidewalks around Clarke Central are too close to the street, too, Begle said.

Housing could be addressed by redeveloping Broadacres and Rocksprings Homes into mixed-income neighborhoods similar to Columbia Brookside (formerly Jack R. Wells or Pauldoe), with inclusionary zoning to force developers to include affordable units, and by ramping the AHA and ALT’s existing programs, Begle said.

A historic district is a possibility too; historic preservation is “very critical” to preserving black culture, Davis said.

“There is really nothing to stop wholesale demolition of entire blocks, because it is [zoned] multifamily,” ACC Commissioner Melissa Link said. A historic district would not only freeze homeowners’ taxes for seven years, but stabilize home prices by preventing builders from tearing down modest homes to make way for bigger ones, said Amy Kissane, executive director of the ACHF.