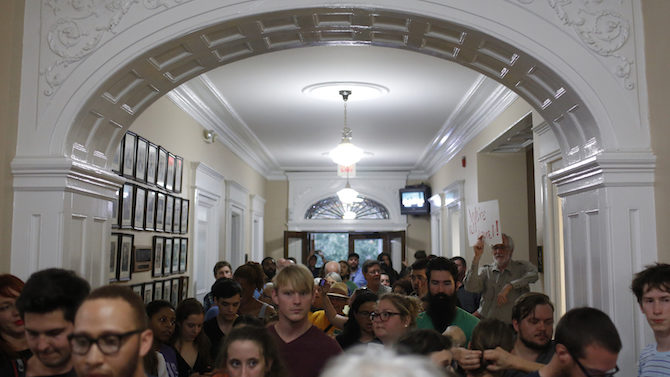 Every single Athens-Clarke County commissioner favored forming a local civil rights committee to deal with issues of discrimination in Athens, and so did almost every single one of the 100 people who packed City Hall for a commission vote on the topic Nov. 1. So why did most of them leave mad?

A bizarre 6-2 vote instructing county staff to bring forward a framework for the civil rights committee revealed discord not only between the citizen activists pushing for the committee and the commissioners who approved it, but behind the rail as well.

The vote itself was technically on approving a law banning bars from faking private events and selectively applying dress codes to keep out people of color.

To that measure, Commissioner Kelly Girtz and commissioners Andy Herod, Sharyn Dickerson, Allison Wright and Harry Sims added two similar but competing proposals paving the way for a civil rights committee. Commissioner Melissa Link proposed an amendment requiring the county manager and attorney to take public input before reporting back to the commission in June.

Girtz quickly moved to accept the Herod/Dickerson/Sims/Wright option, which was similarly worded to his own but also directed county staff to prepare a list of existing resources for people who believe they’ve been discriminated against. He also accepted Link’s amendment.

Herod then made a substitute motion to approve his commission-defined option with no changes, explaining that staff should not meet with the public on issues like this, although Herod and Link wondered why not. Herod’s motion bothered commissioners Jerry NeSmith and Commissioner Jared Bailey. “I really wish there was a little more spirit of collaboration here,” Bailey said.

In the end, Hamby and Commissioner Diane Bell joined Herod, Dickerson, Sims and Wright in voting for their commission-defined option with no amendments. Bailey and NeSmith voted “no,” and Girtz and Link abstained. (“I want to see the work proceed in the best fashion possible, and I’m glad it’s proceeding,” is all Girtz would say by way of explanation.)

“The ‘yes’ votes came from the enemies of justice!” Athens for Everyone activist Jesse Houle shouted from the back of the room, prompting Mayor Nancy Denson to threaten to have police remove him.

Other A4E and Athens Anti-Discrimination Movement members described several reasons for disappointment: There was some skepticism about the majority’s motives. They fear the Herod option will result in a toothless committee that exists outside the government. They couldn’t understand why commissioners refused to bring them into the process early on.

“It’s not bad, but it would’ve been better with what Melissa recommended,” said Mokah Jasmine Johnson, co-founder of the Athens Anti-Discrimination Movement.

“We’ve been given an impossible set of hoops to jump through,” AADM member Tommy Valentine said: First, commissioners said the group didn’t include enough people of color. Then they were unruly. Then commissioners said they didn’t know how a civil rights committee would work. When presented with examples, they said Athens needs a unique solution.

“This vote wouldn’t even have happened without these four [Girtz, Link, NeSmith and Bailey] stepping up and showing leadership, and listening, listening, listening, listening,” Athens for Everyone President Tim Denson said. He also took exception to the suggestion by Mayor Denson and others that they should join with an existing group like the Athens Human Relations Council (which, as Tim Denson noted, does great work raising scholarship money but is not a political advocacy group).

Some commissioners got defensive about the handful of critical remarks. “I will take exception to six of us being specifically called out for not caring about this… I have a 30-year record of fighting for social justice,” Herod said. “I’m not happy at all, the way we were dealt with, the six of us,” Bell added.

Leave Melissa Alone: Bailey described the debate on the civil rights committee as “a pissing contest,” and he was right. They may feel aggrieved, but the tactics of “the six” seemed specifically designed to embarrass Girtz and especially Link.

During Hamby’s comments on the civil rights committee, he mused about the lack of minority representation on advisory boards like the T-SPLOST committee, which will recommended transportation projects to fund with a 1 percent sales tax on the ballot next year. That’s a very valid point—but then he used it to go after just one of his colleagues, Link.

“Who are very, very strong advocates for minorities throughout this community,” Link interjected.

“I don’t doubt that,” Hamby said, talking over her.

Sims asked Denson to intervene—commissioners are not supposed to address each other during formal debates—and she told Hamby to direct his comments to the mayor. But later, when she announced the T-SPLOST committee appointments, she removed one of Link’s nominees, Houle, “in light of very disruptive behavior tonight.” She told Link to nominate someone else. “Hopefully, it’ll be a minority, and if you need help finding an appointment, I can help you,” Denson said,

Dickerson piled on, too. “I found two very highly involved individuals in my district who are not white,” she said.

Regardless of skin color, Link has been a tireless advocate for minority and low-income communities, as she illustrated during her own closing comments, when she talked about the heavily African-American, quickly gentrifying West Broad neighborhood she represents. An infill ordinance winding its way through the Planning Commission (more on that later in this column) won’t protect multi-family-zoned neighborhoods from out-of-scale development. “We have the opportunity to protect some of these neighborhoods, to implement some affordable housing, to tweak our zoning here and there,” Link said. “It’s not that hard to do.” [BA]

Out of the Loop: Commissioners did resolve their geographical dispute from last month over funding for bicycle and pedestrian safety projects.

“We’re having some significant issues on the Eastside, outside of the Loop, and that is just as important as other parts of the community,” Herod said. Cedar Shoals Drive is dangerous to cross, so he and Dickerson proposed adding two crosswalks with beacons and refuge islands. The cost estimate is $50,000, according to Manager Blaine Williams. (Remember how much it bothered Herod when Link wanted to go over budget for Chase Street improvements.) Most likely, the crosswalks would be at East Paces Drive and Barrington Drive, Williams said.

Girtz added $40,000 worth of landscaping on Prince Avenue, North Avenue, Baxter Street and Barnett Shoals Road, the rationale being that it’d be cheaper to do it while workers are already out there then to go back and do it later.

The slate of projects also includes improvements on Hawthorne Avenue, Alps Road, Gaines School Road and Lumpkin Street. $144,000 is budgeted for pedestrian and bike projects this year; the remainder could come from Safe Routes to School funding or money budgeted for other purposes but not spent.

For the time being, commissioners removed a project to move the crosswalk near The Grit to the other side of Newton Street and add an overhead beacon, saving $21,000. That’s because the developer of 100 Prince is conducting a traffic study and has offered to pay up to $100,000 for pedestrian safety improvements. And they want all of the crosswalk beacons in the city to be consistent so drivers are familiar with them.

The tweaked project list passed unanimously. “The spirit of cooperation on these two [commission-defined options] is much better, and I wish it was always like this,” Bailey said. “I’m just glad to see us all get along.”