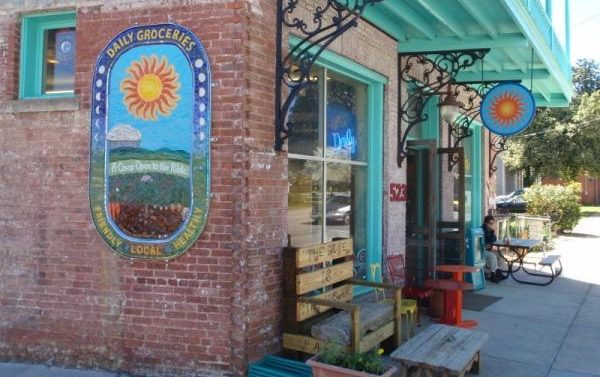 A bigger selection of local items, lower prices, a deli and a seating area—maybe even a community space; those are just some of the ideas the owner-members of Daily Groceries Co-op are discussing for a possible move down the street into the 100 Prince development on the former St. Joseph Catholic Church property.

Designated for a grocery anchor, the 13,000-square-foot space in the development is 10 times larger than Daily’s current home a couple of blocks down Prince Avenue. The co-op has been housed in different facilities on Prince since 1992—it was initially next to the Grit before moving to the corner of Pope and Prince in 1997. If things go as the board wishes, Daily Groceries will be ringing up cash registers in a new facility sometime in 2018.

“I talk with a lot of people who shop in our store, and they tell me they love the size, the space and the charm of our building,” General Manager Lisa Merva said. “They’re afraid we’re going to lose some of our flavor and uniqueness if we move to a bigger place. But we think we’re going to gain a lot.”

In a few months, probably in late January and early February, Daily will undertake a capital campaign, said Delene Porter, head of the co-op’s board of directors. “We’ll try to increase the number of owner-members” who now number about 1,200, she said. “We’ll ask customers to come in, shop, buy a share, make an investment.”

In hand already is a $900,000 pledge; the goal is to amass another $1.5 million from owner-members, “as loans, as investments they’ll get back,” Porter said. At the end of a two-to-three-week pledge period, the board of directors will know if the project is going forward. At last week’s annual meeting of Daily’s owner-members, people were asked to say what they like about the current facility and what they’d like to see in a new one.

Porter and Merva said they thought about improving and expanding their current space or even moving upstairs, but doing so just wasn’t feasible because of so many built-in inefficiencies. Porter hopes the numbers add up and Daily can move into the 100 Prince complex, but if not, the co-op will continue trying to find a larger, more suitable space.

It needs one. In the last five years, the store has seen a 60 percent growth in sales. In 2015, it had $1.34 million in sales, and 30 percent of its product purchases were for local goods.

“Daily is really bursting, but we can’t thrive in this location,” Merva said. “We can’t keep enough stuff on the shelves.”