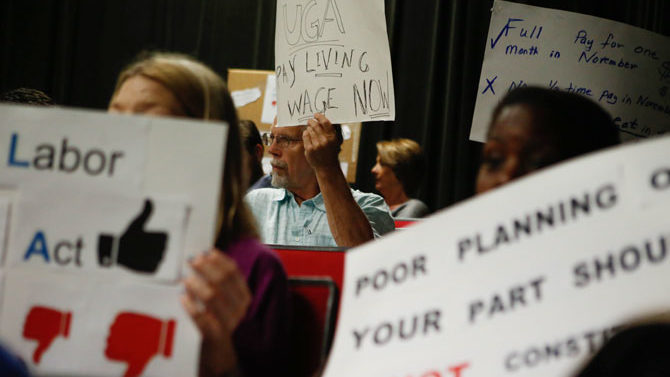 “I deeply care about our staff and want to make this transition as smoothly as we can,” UGA President Jere Morehead said at his quarterly media briefing last week, but administrators say they have no choice but to make the unpopular switch from a monthly to a biweekly pay schedule for thousands of employees.

As Flagpole has previously reported, changes to the Fair Labor Standards Act that take effect Dec. 1 raise the salary threshold for workers who are eligible for overtime from $23,660 to $47,476. The changes mean that 3,100 UGA employees will now be eligible for overtime pay or comp time if they work more than 40 hours in a week.

But in implementing the new rules, UGA is withholding those employees’ pay for the second half of November until Dec. 9, when they will start to receive checks every two weeks instead of every month. Many affected employees are upset by the delay and because they’ll receive 7.6 percent less money 10 months out of the year—except for the two months when they’ll receive three checks—although monthly expenses will remain the same.

Although UGA has cast the changes as the result of the FLSA, Vice President for Finance and Administration Ryan Nesbit acknowledged that the FLSA does not prohibit paying employees monthly. The pay schedule changes are the result of a combination of state law and UGA and University System of Georgia policy, he told Flagpole.

But administrators raised the possibility that the changes might be delayed or canceled if a federal lawsuit is successful. Georgia joined 20 other states last week that are suing to block the new overtime rule.

Assuming the rules stand, UGA and USG could always change their policies, but that doesn’t appear to be in the cards. There’s another option, too: Based on guidance offered by the U.S. Department of Labor, UGA could simply tell affected employees what most of them believe to be true—that the university will limit their hours to 40 rather than pay them overtime. Since universities and their employees are allowed to agree that they’ll work X hours a week and get paid for that amount, there’d be no reason to change the pay period.