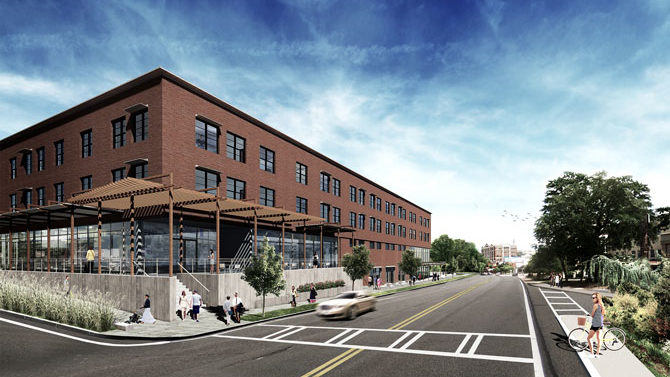 At the request of developers, the Athens-Clarke County Commission approved a small but significant revision to the code Sept. 6 allowing two rows of parking in front of commercial developments on Atlanta Highway and Lexington Road—even though Urban Land Institute reports on revitalizing those corridors don’t mention parking as an impediment to redevelopment.

“This is the first step to recognize that we have suburban, auto-centric commercial corridors… where the regulations need to be changed so they are attractive for the growth and redevelopment of businesses,” said Commissioner Jerry NeSmith, who represents Atlanta Highway and has been pushing for the change.

Tyler Dewey, executive director of BikeAthens, objected to the new rule. “It certainly won’t make [those corridors] more walkable and bikeable, and it has the potential to make it less walkable and bikeable,” he said, noting that pedestrians will now have to cross shadeless parking lots as well as several lanes of traffic, often without the benefit of sidewalks, to reach their destinations.

“I think this is a step backwards,” Commissioner Jared Bailey said. “We put certain things in place to try to control development and have a vision for what our community should look like. There’s some desire to keep up with the Joneses, I think, because we’ve got Epps Bridge over in Oconee County where they’re putting everything up. Do we really want to look like that? Do we really want to be Gwinnett County?”

And Bailey sees a pattern, pointing to the green building code that was put on hold when Mayor Nancy Denson took office in 2011, as well as the wetland buffer that the commission voted down last year. “We’re doing things in this community that are steps backward, in my opinion,” he said.

Bailey and Melissa Link were the only commissioners to oppose front parking. Link said she likes a component that requires commercial parcels to be interconnected with those next door, and she could live with one row of parking, but the ordinance went too far.

The project—which will also include a restaurant in the historic sanctuary, a grocery store and 126 apartments aimed at young professionals and empty-nesters—was lauded by many neighborhood residents as the type of development Athens needs. Some on nearby Pulaski, Barrow and Childs streets, though, expressed concerns about traffic the development would bring.

To address those concerns, Commissioner Kelly Girtz successfully proposed a few changes to the development, including requiring a denser vegetative buffer and prohibiting right turns out of the Childs Street exit. The developer, Greenville, SC-based Homes Urban, will also be required to conduct a more detailed 20-year traffic study.

NeSmith questioned why another traffic study is necessary when the developer has already agreed to pay for traffic signals and a crosswalk at the Prince Avenue entrance. “It’s obvious we need a good pedestrian crossing there,” NeSmith said, noting that the commission has already approved, then delayed, improvements to the crosswalk at The Grit. “Why don’t we just do it?” he asked. “That’s our job.”

“This really creates a more longitudinal look at this,” Girtz responded.

And Bailey predicted that Childs and Barrow residents would still experience heavier traffic. “It’s going to be dumping a lot of cars… on a very quiet street,” he said.

However, all nine commissioners voted in favor of the project—including Link, who’s often critical of development, especially in the downtown area. (Commissioner Harry Sims was serving as mayor in Nancy Denson’s absence and did not vote.) “This is the way it should be done,” Link said. “I think it’s going to be a project we can be really, really proud of.”

Meanwhile, Daily Groceries Co-op has signed a tentative deal to move from its 1,300-square-foot storefront at the corner of Prince Avenue and Pope Street into a 14,000-square-foot space at 100 Prince when it’s completed in 2018.

“This is the first step of a really, really long process for the co-op,” Delene Porter, chairwoman of Daily’s board of directors, told Flagpole.

To build out the space, the co-op will need to raise about $3.9 million, according to an email to owner-members. Owner-members have already committed $900,000, and Porter said the nonprofit plans to raise $1.5 million from a combination of loans and selling new shares.

The co-op currently employs 20 people, and sales topped $1.3 million in 2015. “Daily is bursting at the seams,” Porter said. She compared the size of the space to Earth Fare. About 10,000 square feet will be retail—allowing the co-op to offer not only more products but amenities like a hot bar—with 4,000 square feet made up of offices, storage space and a kitchen.

Daily’s 1,125 owner-members are invited to attend a board meeting at 7:30 p.m. Sept. 19 in the Prince Avenue firehall to discuss the upcoming capital campaign.

Oconee Hill Cemetery: Also at their Sept. 6 meeting, commissioners approved a tentative plan to extend the North Oconee River Greenway through the historic cemetery on the eastern edge of campus. The cemetery’s board of trustees still has to sign off, they noted. Concerns remain but seem to be easing; Commissioner Diane Bell said her constituents have been “very relieved” as they learn more about the plan, which will limit access and doesn’t affect gravesites.

A Must-See: If you’re one of the many Athenians who’s afraid the city is losing its sense of place (or just somebody who misses shopping at Lee’s Wigs), check out UGA College of Environment and Design professor Pratt Cassity’s presentation “Where Have All the Wig Shops Gone? White Privilege and Downtown Development,” sponsored by the Student Historic Preservation Organization. It’s at 5 p.m. Thursday, Sept. 15 in room 125 of the Jackson Street Building on campus.