ACC Commission Is Lukewarm About a Civil Rights Committee 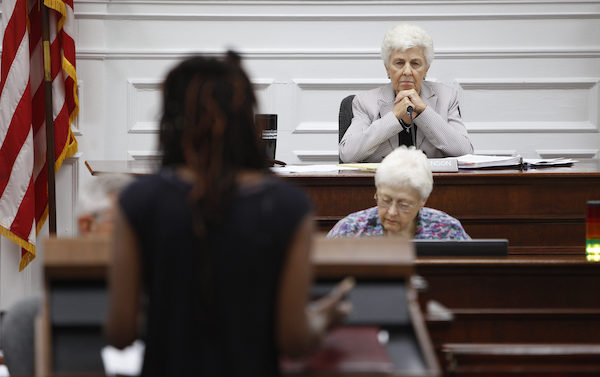 Some Athens-Clarke County commissioners are open to the idea of a creating a civil-rights committee as part of an anti-discrimination ordinance that’s up for a vote Sept. 6, but others are resisting it—including the only black commissioner on the board.

The ordinance as written would ban the widespread practices of student bars discriminating against minorities under the guise of dress-code violations or hosting private events. Bars that the county attorney’s office found in violation at an administrative hearing similar to a civil trial could have their alcohol licenses suspended or revoked.

About 20 citizens asked commissioners Tuesday night to include the civil rights committee as well.

“This is merely a bar admission ordinance,” said Jesse Houle of Athens for Everyone. “This is not enough. To make it adequate, we need to add a civil rights committee.”

Such a committee, as outlined by A4E, would consist of 10 members “who are committed to diversity and civil rights,” one appointed by each commissioner. They would host education programs, serve as a liaison to minority organizations, collect and analyze data on discrimination and monitor the county attorney’s enforcement of the discrimination ordinanceCommissioner Melissa Link said she won’t vote for the ordinance without a civil rights committee. “I can’t support it as-is,” Link said. “I don’t think it’s complete, and I don’t feel like it’s effective.”

While commissioners mostly weren’t interested in a civil rights committee with the force of law behind it, several—including Kelly Girtz, Jerry NeSmith, Sharyn Dickerson and Diane Bell—said they’re interested in a committee that serves in an educational and advisory role. “At least some kind of forum for community outreach or dialog would benefit us,” Girtz said.

Commissioner Melissa Link said she won’t vote for the ordinance without a civil rights committee. “I can’t support it as-is,” Link said. “I don’t think it’s complete, and I don’t feel like it’s effective.”

The commission’s only black member, Harry Sims, said he’s skeptical the committee would do any good.

“I understand about discrimination a little bit more than you do,” said Sims, who attended segregated schools and recalled not being allowed to eat his ice cream on Dairy Queen property.

“Until we change the hearts of people, discrimination ain’t going away,” he said.

Sims also expressed skepticism that the commission is capable of appointing a committee that reflects the diversity of Athens. It’s hard even for him to find African Americans willing to serve on government boards, he said, pointing out that most in the room who are in favor of the committee were white.

“Even tonight, when you look at who got up to speak, not many looked like me,” he said.

While most of the debate focused on the committee, speakers also wanted the local discrimination ban applied to other types of businesses besides bars.

“There’s a lot of discrimination that happens outside of those spaces,” Broderick Flanigan said.

Katie Elrod said her multi-racial friend was called “the n-word” by the owner of a Normaltown business. “We were told to get out,” Elrod said. “She was humiliated.”

Such stories aren’t uncommon, other speakers said, but discrimination can also be more subtle. “I’ve had my own fair share of discomfort walking into stores downtown,” said Mokah Jasmine Johnson, leader of the Athens Anti-Discrimination Movement. “They do not acknowledge you. They do not greet you… Just penalizing the bars is not going to end it.”

In addition, ACC can only regulate a few types businesses, including taxis, fortune tellers and establishments that sell alcohol; the state issues permits for the vast majority of businesses, Berryman said. What are commonly known as “business licenses” are actually merely tax documents, and ACC can’t suspend or revoke them like a liquor license, he said.

“I feel like, in and of itself, the ordinance is discriminatory toward one type of business,” Link said.