What, Exactly, Does Voxpro Do? 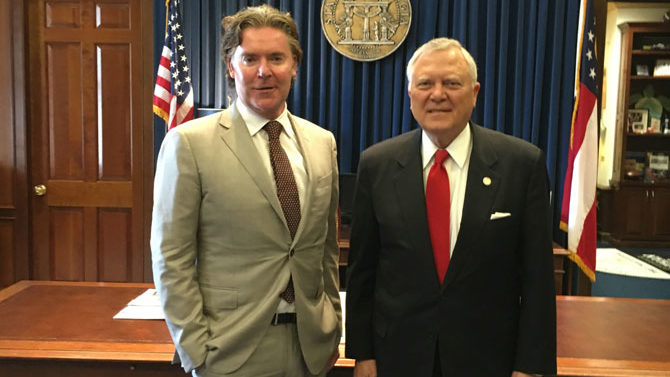 When the Irish company Voxpro announced Aug. 1 it would open a “Center of Excellence” in Athens that would employ 500 people, it sounded like big news.

But the news came with little of the pomp and circumstance usually associated with major economic development announcements like Caterpillar, and curiously few details, such as the location of this “Center of Excellence” within Athens. (Vacant office space within the One Press Place building, according to Ryan Moore, director Athens-Clarke County economic development department.)

And what does Voxpro do, anyway? Here’s the description from the press release: “Voxpro provides a range of business services, such as multilingual customer experience and technical support solutions, trust and safety monitoring, social media management and product insight. The company works with clients from innovative tech startups to global giants, helping them scale internationally and deliver a high-quality customer experience with every interaction.”

Wondering what that even means, I reached out to Gov. Nathan Deal’s office, where a communications staffer referred me to someone at the Department of Economic Development, who referred me to Voxpro PR. Asked for clarification on what employees would be doing in this Athens facility, the Voxpro PR person replied: “Voxpro is Ireland’s largest international provider of customer experience and technical support solutions. The company manages a range of business services on behalf of its partners, such as multilingual customer experience and technical support, trust and safety activity, social media management and harnessing product insights.”

OK. Strip out the jargon, and it’s a call center where people provide tech support and make sales calls. So how much will these jobs pay? “Voxpro wages and qualification level vary according to each role,” said the PR person, Ann Marie Slattery.

I finally wrung it out of a couple of Athens-Clarke County commissioners, Andy Herod and Melissa Link, that the jobs will pay $25,000–$40,000 a year. Another person told me she’d been offered a job at Voxpro at $12 an hour. Some of the jobs require college degrees.

Not to sound ungrateful—jobs are better than no jobs—but Athens has no lack of jobs that pay mediocre wages. Athens has the lowest unemployment rate in the state, as well as one of the highest poverty rates in the country. The main problem is that most of Athens’ jobs don’t pay very well. It doesn’t look like Voxpro is going to do much to fix that.

The site was among six put forward by a site-selection committee. After the University of Georgia refused to let ACC build the center on land it owns off South Milledge Avenue, the Cleveland Road site rose to the top because the county is also building a new fire station there, reducing costs for the underfunded $2.5 million SPLOST project. Other sites would have required scaling back the project. Even so, the committee recommended sites on Lexington Road and Gaines School Road over Cleveland Road.

Several 4-H representatives and others who use the facility spoke against that site. “It should be something we’re proud of, not something we tuck back where people can’t find it,” said Leslie Johnson.

Tim Denson of Athens for Everyone urged the commission to put off a decision for another round of public comment.

“It seems an Eastside location would be more fitting because most farms in the county are located there,” said another A4E member, Chris Dowd.

Commissioner Jared Bailey made the case for rejecting the Cleveland Road location, although he acknowledged he did not have a better one to offer. “It’s not on a bus line,” Bailey said. “It’s off a congested highway, hidden in a small commercial park… It’s the worst place you could possibly put it. It’s out there. It’s way out there.” Bailey added that he is “disappointed” and “embarrassed” that UGA was not more, um, cooperative. Administrators told county officials that the extension office did not fit in with the university’s master plan.

Link complained that two sparsely attended public hearings on site selection weren’t well publicized, extension employees and a user group were not consulted in the final stages, and employees have been out of town at 4-H conferences while the decision was made.

While a site closer to the city core might be preferable, commissioners Kelly Girtz and Sharyn Dickerson noted that 5–7 acres aren’t easy to come by inside the Loop, especially at a price the city could afford. That’s how much land the extension service said it needed for office space for 16 people, classrooms, a 200-person meeting room, parking, demonstration gardens and a future pavilion. Nor, as Herod said, is there any guarantee a better site would arise if the commission put off a decision. Herod, however, favored a site off Lexington Road that was one of the five finalists.

As for accessibility, NeSmith measured the drive times from various points around the county, and said they’re comparable to the current location on West Broad Street because the new site is right off the Loop.

It’s easily accessible via Marilyn Farmer Way behind Georgia Square Mall and is just 800 feet from a bus stop, Commissioner Kelly Girtz said. “I don’t see it as inaccessible at all,” he said.

After a few minutes’ confusion during a vote to cut off debate, the final vote was 7–3, with Herod, Link and Bailey opposing the Cleveland Road site.

The extension, a partnership between UGA and county governments as part of its land-grant mission, is home to the popular 4-H youth leadership program and offers services like classes on farming, environmental stewardship, gardening, cooking, nutrition and family budgeting.

Free Bus Rides: With much less arguing and by a unanimous vote, the commission also extended and expanded a summer program that has allowed kids ages 5–17 to ride Athens Transit for free. An amendment introduced by Commissioner Kelly Girtz broadened the free-fare program to all students with a valid school ID, so high-school students who are over 17 can take advantage of it as well. (He also instructed county staff to come up with a process for home-schooled or private-school students who lack a school ID.)

The fare waiver is aimed at helping low-income students stay out of trouble by making it easier for them to find transportation to work or leisure activities, as well as getting to class if they miss the school bus. The summer pilot program was successful, with youth ridership quadrupling.

“Poverty is an extremely difficult problem to attack, but this program does it very effectively,” local activist Russell Edwards said.

Girtz’s motion included a provision that the program will be reviewed every year, which he noted would be done as part of the budget process anyway. But he dropped Sims and Dickerson’s request that the program be referred to as a “fare waiver” rather than “free” to teach kids the value of a dollar. Some objected to that language as patronizing. (Since 80 percent of youth riders apparently didn’t have a dollar for fare, they probably already know the value of a dollar better than most of us.)

Athens Transit estimates that extending it year-round will cost just $40,000 in farebox revenue, which officials think they can make up by cutting costs elsewhere.