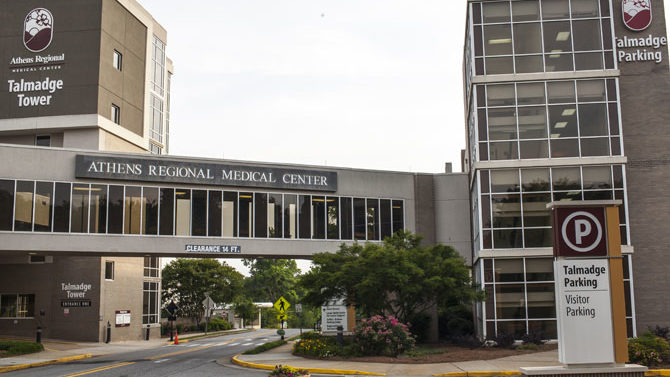 While the hospital announced plans to find a partner last year, after former CEO Jamey Thaw left amidst financial unsteadiness, and it entered into negotiations with Piedmont in December, the Apr. 12 work session was the first time the public has heard details about the takeover.

And it really is a takeover, not a merger or a partnership. Piedmont would own Athens Regional and have the power to approve major decisions like budgeting and hiring or firing the CEO. “You have to think of this as a change-of-control transaction,” said Keith Anderson, the Chicago lawyer who helped ARHS negotiate the deal.

But it comes with a big payoff. As part of the deal, Piedmont will take on $195 million in bonds sold in 2007 and 2012, and pay off one chunk by next March and the rest by Mar. 1, 2022. (ACC taxpayers are backing those bonds, issued through the Clarke County Hospital Authority.) In addition, Piedmont will spend $375 million on capital improvements over the next seven years. Needs include renovations to labor and delivery, the emergency room and intensive care; more outpatient centers in outlying communities; and costly robotic surgical equipment and accounting software, ARHS CEO Charles Peck told the commission.

The health care industry is changing rapidly. Insurance companies are merging, which means hospitals have to merge, too, or they lose negotiating power over reimbursement rates. The chain that owned St. Mary’s Hospital was bought by Trinity Health in 2013, and just last year St. Mary’s bought a smaller hospital in Franklin County. Government is more focused on outcomes, rather than heads on beds. “It boils down to, if you don’t have scale, it really is hard to compete,” said Jim Hopkins, chairman of the ARHS’s board of trustees.

As described last week, most patients and employees—in addition to being a regional health care hub, ARHS is Athens’ second-largest employer—shouldn’t notice much difference, or if they do, it should be positive. Athens Regional Medical Center patients will have access to Piedmont’s specialists in Atlanta, as well as national cancer and heart-disease specialists at Piedmont-affiliated hospitals in Houston and Cleveland. Some employees might receive raises as they’re brought into the Atlanta pay scale. No one will be laid off as a result of the merger, at least for the first 12 months.

The hospital authority—the quasi-governmental agency that’s a vestige of the old Athens General days—will remain in place, serving as a watchdog to ensure Piedmont holds up its end of the bargain.

The commission is being asked to approve the deal at its May 3 meeting. The state attorney general’s office and Federal Trade Commission must sign off, too.