The Two Sides of the Clarke County School District 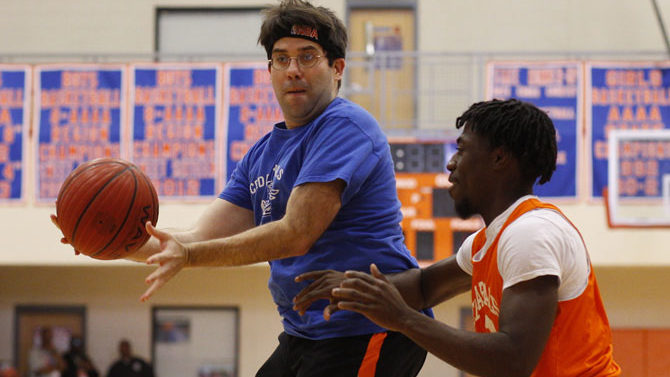 Last Friday, Cedar Shoals High School faculty members took on a team of students in a charity basketball game in the Jaguars’ gym. Experience won over athleticism as the teachers pulled it out 42-41, but that’s not the important thing. The event raised more than $1,000 for The Cottage, a local nonprofit that counsels victims of sexual assault.

In light of the ongoing controversy at CSHS, it was great seeing several hundred students, teachers and parents give their time and money for such an event. The community continues to demand answers from the Clarke County School District administration but is also rallying around the hardworking teachers and kids who’ve been most affected by this mess.

Consider: The National School Boards Association named Burney-Harris Lyons Middle School science teacher Joanna Beck one of “20 technology educators to watch.” Both Cedar Shoals and Clarke Central High School are Georgia Department of Education AP Honors Schools. One of the criteria is that at least 30 percent of AP exams at both schools were taken by minority students, which is particularly encouraging. The GADOE named CCSD an “outstanding district” for its farm-to-table program. And the Cedar Shoals band was chosen to perform in Chicago’s Thanksgiving parade. Those are a few of the district’s recent accolades. So while the district has its problems, not everything is rotten—and we should all remember that.

Price Speaks: At the same time, questions still remain about the district’s handling of the alleged sexual assault in January. District administrators have consistently pointed the finger at Principal Tony Price, saying he failed to suspend the three students accused of sexually assaulting a classmate on campus in violation of the district’s code of conduct. They stuck by that assertion after Price released a lengthy statement to Flagpole last week through his attorney, Michael Daniel of the law firm Prior, Daniel & Wiltshire. Daniel also represents Marta Dean, a Coile Middle School teacher who says she was given notice of termination because she complained about student discipline to higher-ups.

In the statement, Price maintains that district police refused repeated requests to fix or replace the antiquated security system that led investigators and administrators for weeks to believe that the camera that captured the incident was not working. He says he did his part by reporting the accusation to district police, who work for Lanoue and who referred it to Athens-Clarke County police and reported it up the chain of command. (Principals are still responsible for security in their schools, responded district spokeswoman Anisa Sullivan Jimenez.)

As for the lingering question of why Price did not suspend the accused students until they were arrested nearly a month later, he says he did not even know the names of two of the accused attackers, law enforcement never briefed him, and he had conflicting reports on whether the sex was consensual. (If it was consensual, he would have been forced to suspend the victim as well, he said.)

The bottom line, for Price: “The superintendent has a duty to address the issue of sexual assault and create a comprehensive response, rather he chose to cast blame on a subordinate.” Price is on administrative leave and likely to be fired, so feel free to read this statement as laying the groundwork for an appeal or a wrongful termination lawsuit. Regardless, it certainly muddies the waters further as far as the district’s official story goes.

The thing that continues to blow my mind is that, while top administrators have said they received one initial report and no follow-up and did not know the severity of the incident, as Jimenez has admitted, neither did anyone in the central office or on the school board bother to follow up themselves.

Mark Your Calendars: School discipline will be the topic of discussion at a (much-needed) public forum at 6 p.m. Thursday, Apr. 7 in the H.T. Edwards building. As if that wasn’t enough fun for one night, at 7 p.m. there will be a marathon ACC Planning Commission meeting featuring discussion of the St. Joe development, the Eastside’s new Wal-Kroger and another massive development out on Atlanta Highway. Pack a lunch.