Downtown Parking, Free Bus Rides for Kids and the End of AthFest? 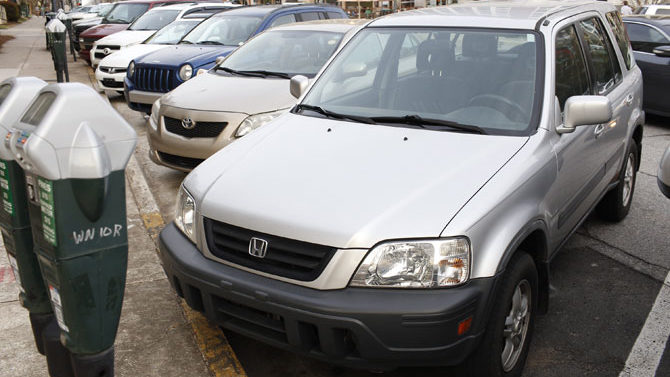 Drivers could soon be paying more to park on the street in downtown Athens—but they’d be able to park in decks cheaper.

The Athens Downtown Development Authority is proposing to raise on-street parking rates by a quarter, to $1 an hour. At the same time, authority board members want to lower deck rates 50 cents, also to $1 an hour.

ADDA Executive Director Pamela Thompson floated the idea of raising the on-street rate at the authority’s Tuesday, Mar. 15 meeting. New meters that accept credit and debit cards are bringing in more revenue, but they’re also costing $200,000 in transaction fees, and that figure will increase when new meters are installed on Clayton Street and ACC adds meters to spaces on Strong Street and Dougherty Street, where the Transportation and Public Works Department recently replaced two travel lanes with parallel parking.

A 25-cent increase in on-street rates would bring in more than $400,000. Board members’ questions to Thompson revealed that a corresponding 50-cent drop in deck rates would cost $180,000, leaving enough money to cover the transaction fees.

“The goal would eventually would be to get the decks and the on-street parking in line with each other,” said ADDA board member and Athens-Clarke County Commissioner Mike Hamby. “I’d love to take them all to $1—on-street and deck.”

That’s a smart policy. ACC officials have long sought to push longer-term visitors—people who work downtown, people going out for a night on the town, students going to class—into decks, leaving on-street spaces open for those who just want to run in someplace for lunch or a quick errand. The best way to do that is to make it cheaper (or at least not more expensive) to park in a deck. Otherwise, many drivers will circle endlessly looking for a prime spot rather than pay more and walk a block or two.

Thompson and ADDA Parking Director Chuck Horton also want to raise ticket amounts for parkers who overstay on game days. A ticket for an expired meter is $10—far cheaper than the cost of a parking space when UGA plays at home. They want to raise it to $25 during football games because tailgaters are saving money by parking downtown all day and eating the ticket, which hurts turnover for downtown businesses, Thompson said.

That proposal was tabled for a month after board members raised questions, and some outright opposed it. “I want us to think long and hard before we do it, because it’s going to hurt our reputation,” Mayor Nancy Denson said.

The board also put off a decision on parking rates for a month to gather input from downtown businesses. If approved by the ADDA in April, the decision on rates will go to the Mayor and Commission for final approval.

AthFest Needs Help: Alicia Nickles, a board member for AthFest Educates—the nonprofit that raises money for arts and music education and puts on AthFest and the AthHalf half-marathon—came to the ADDA meeting with hat in hand, asking for help keeping the free summer music festival running. (Full disclosure: Nickles is also Flagpole’s advertising director and publisher, and totally did not threaten to move my office to a broom closet if I didn’t write this.)

AthFest is not a moneymaker for its parent nonprofit, Nickles said. In fact, after paying the bands and for lighting, sound and the stage (and keeping club-crawl wristbands a very reasonable $25), it loses money, she said, and sponsors haven’t been stepping up. “In order to keep this going and keep this free, we need help,” she said.

AthFest started 20 years ago in part to bring people downtown in June, a slow month for most businesses. “We see places that are dead all summer, and they use that money to get them through,” Nickles said.

But lately, it seems AthFest has become underappreciated. Nickles asked the ADDA for help paying the Selig Center for Economic Growth at UGA $5,100 for a study on the economic impact of AthFest to prove that the festival still has value to the city. “We want to see if the community still appreciates everything we’re doing.” she said. The ADDA took no action on the request.

Free Buses: Riding the bus could be free for Athens K-12 students this summer if the ACC Commission approves an Athens Transit youth ridership program at its Tuesday, Apr. 6 meeting. In addition, students who are participating in a new mentorship and job training program could ride the bus year-round.

The proposal grew out of discussions with the Mayor’s Youth Development Task Force, which is working on combatting gangs, and the Great Promise Partnership, a nonprofit started by former Georgia Department of Community Affairs Commissioner Mike Beatty that matches at-risk youth with employers like Caterpillar, Power Partners, Carrier Transicold and Zaxby’s that provide part-time work, mentoring and training.

Approximately 100 students who participate in GPP could ride Athens Transit free year-round, and anyone age 5–17 could ride free from May 20–Aug. 9, giving those kids a way to get to work, parks, shopping and volunteer opportunities while on summer break. The program would cost $10,000 in lost revenue, Athens Transit estimates.

Several commissioners, including Melissa Link, Allison Wright and Harry Sims, said they support the pilot project and would like to see it made permanent if it’s successful. They also suggested a bus line on Commerce Road, which has no transit service, to take kids to Sandy Creek Nature Center.

Meet the New Boss: Mayor Nancy Denson announced last week that she’s naming Blaine Williams, who has served as interim manager of the ACC government since Alan Reddish retired in February, to the post permanently, subject to commission approval Apr. 6.

Reddish hired Williams away from Floyd County (Rome) in 2013 to serve as assistant manager overseeing planning, public utilities, transportation and public works, building permits and inspections, housing and community development, the airport, transit and solid waste. He’s drawn (mostly) positive reviews from commissioners and citizens, other than a recent spat with Complete Street Athens. But one wonders how hard Denson really looked past Athens City Hall.

One commissioner assured me that Williams really was the clear best choice among the 17 finalists whose resumes were reviewed by committee chairs, both from the standpoint of running the bureaucracy—where Reddish excelled—and innovating, where commissioners often felt Reddish was lacking.

Another point is that ACC isn’t necessarily equipped to draw top-shelf talent. As county finance officials have repeatedly told commissioners over the years, ACC’s pay scale is below what many similarly sized governments offer. External applicants for top jobs are often coming from small towns that don’t have the same challenges or complexity; applicants from bigger cities often only have experience running a department.

Still, we’re starting to see a pattern here with this mayor, and not necessarily a healthy one. When the commission didn’t renew the county auditor’s contract in 2013, Denson left the position open for a year, then appointed a retired ACC official, Steve Martin, on an interim basis. After supposedly conducting a nationwide search, she appointed Stephanie Maddox, who worked in the ACC Finance Department before Martin tapped her as his deputy. Nothing against Williams, Martin or Maddox, who are all competent people, but one has to wonder who else was out there.

(Oh, and by the way: The previous auditor’s contract wasn’t renewed in 2013 because commissioners thought he was taking too long to finish audits. He’d taken a little over a year to audit the ADDA. Martin never completed an audit in his year on the job, and almost a year after she was hired, Maddox has yet to release one, either.)