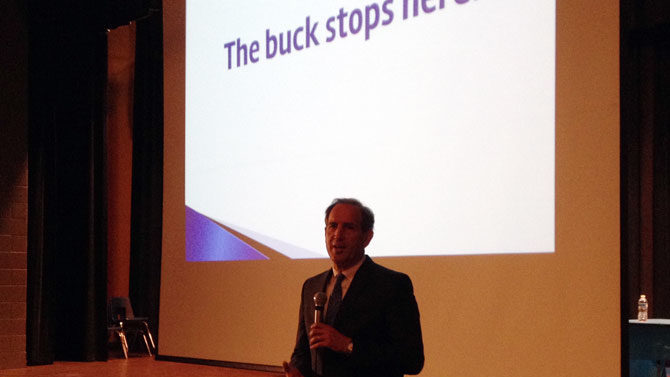 You can forget about this idea that Clarke County School District officials covered up an alleged sexual assault at Cedar Shoals High School. To cover something up, people have to think it’s worth covering up, and it’s become increasingly clear that administrators simply didn’t think this was that big of a deal.

Facing down an angry crowd of several hundred parents, students and teachers at a Cedar Shoals PTO forum Feb. 18, Superintendent Phil Lanoue laid out a partial timeline of events, but questions still linger.

• On Jan. 7, the victim reported the rape, and school administrators referred her to a local hospital for counseling. CCSD security brought in Athens-Clarke County police to investigate and alerted Lanoue, Associate Superintendent Ted Gilbert and Director of Public Relations Anisa Sullivan Jimenez.

• On Jan. 8, Jimenez emailed school board members. A voicemail was left for Executive Director of Support Services Ernest Hardaway’s assistant. Administrators tried and failed to retrieve a video, leading them to believe the incident wasn’t recorded.

• Two of the accused attackers were arrested Jan. 30, and the third was arrested two days later. School administrators informed Hardaway’s assistant of the charges.

• On Feb. 4, the arrests were reported in the Athens Banner-Herald. Lanoue notified the search committee in Fulton County of the article.

• An internal investigation began Feb. 8. “Messaging and support” was provided to students.

• Lanoue released statements to the CHS community Feb. 9 and at a school board meeting Feb. 11.

• On Feb. 12, CSHS Principal Tony Price was placed on administrative leave. He was replaced by Whit Davis Elementary Principal Derrick Maxwell on Feb. 15.

Lanoue repeatedly accepted responsibility for the communication breakdown, but it seems like no one in the central office really ever perked up and said, “Strong-arm rape? Wow, that sounds serious.” No one took the initiative to even return a message, apparently. “There was nothing to make me think the school should involve the parents or anything,” Hardaway said.

Lanoue seemed most passionate during the 90-minute forum when he was accused of sweeping this under the rug until the Fulton County school system came through with a job offer. He also bristled at the suggestion in an interview with Tim Bryant on WGAU 1340 AM. “That is sort of a personal attack about Fulton,” Lanoue said. “It’s pretty upsetting. That’s never how I operated, and it’s just so far from the truth.” But he was so distant during this entire ordeal—until it blew up into a PR crisis—that it’s completely legit to wonder if, at the very least, his head’s somewhere else.

In the end, Lanoue is probably going to wriggle out of this, and Price will take the fall. Of course, Price may not be blameless. Did he believe the victim, or were the accused students allowed to stay in school because he dismissed her story? We don’t know. Why weren’t they suspended? Because it’s hard to suspend a student for more than 10 days; due process kicks in, Lanoue said, and there’s a “real question” about whether students can be expelled on pending charges. Other than that, FERPA, FERPA, FERPA—the federal student privacy law. “We can’t talk about student discipline,” Jimenez said.

Contrast this response to ACC Police Chief Scott Freeman’s. ACCPD appointed three investigators to the case within a day. They finally viewed the stairwell camera’s video on Jan. 20, then re-interviewed the victim and the three suspects. The department’s cybercrime unit wasn’t able to make a hard copy until Feb. 11. “That video very much corroborated everything [the victim told] the detectives,” Freeman told Flagpole. In fact, they could have made arrests much sooner if they’d had the video from the beginning, he said. (He added, unprompted, that he has “no doubt” the school didn’t try to hide the video.)

Why did it take almost two weeks to make arrests after the video came to light? “There was an extensive amount of work done to make sure we’re getting this right,” Freeman said. “It’s a very sensitive case.”

After 90 minutes of angry speeches, jeering and booing, attendees left the forum unsatisfied. “I think the crowd was hoping for more accountability, more ‘I screwed up,’” said one mother and organizer, Janet Frick.