How Could the Scandal at Cedar Shoals Happen? 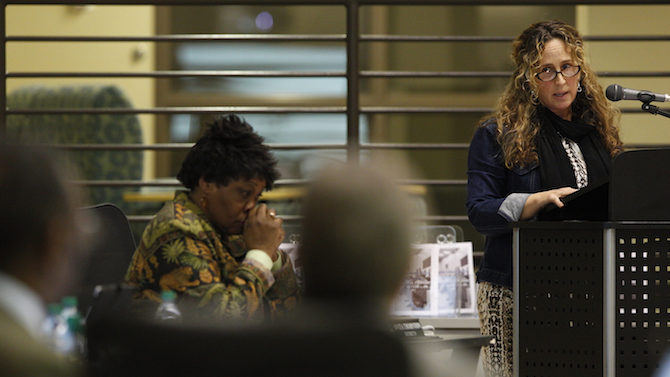 This can’t be how Phil Lanoue wanted to go out.

The 2015 National Superintendent of the Year is leaving to run the Fulton County school system May 1, and his last act as Clarke County’s superintendent may be to clean up a scandal that’s rocked the city—one that could go all the way to the top, tarnish his legacy and set back the Clarke County School District’s reputation, which for the past seven years he has worked so hard to improve.

On Feb. 4—less than a day before Lanoue and Fulton school officials would announce that he’s the sole finalist for the Fulton job—Athens Banner-Herald cops reporter Joe Johnson broke a story that three Cedar Shoals High School students had been arrested on charges of raping a 15-year-old classmate in a stairwell.

While a violent attack on school grounds is horrifying in and of itself, it was the school district’s response (or lack thereof) that really sent parents and teachers over the edge. The alleged assault happened on Jan. 7, but teachers, parents and students were not notified until a month later—after stories had already appeared in the ABH and on WSB-TV.

While CCSD officials readily acknowledged that they mishandled the incident, launched an internal investigation and announced plans to beef up security and educate students about consent, questions remain: If, as they maintain, the school promptly turned the case over to police, and there is video evidence, why did it take three weeks to arrest the accused students? Why were they allowed to remain in school during that time while the victim withdrew? Why wasn’t anyone told? Who is responsible?

About 100 parents and students packed what is usually a sparsely attended (after awards are handed out) board of education meeting Feb. 12 to tear into school officials. Many comments focused on the lack of communication and transparency.

“Talk to us, and not just about the good stuff,” parent Shannon York said. “We have to know about what’s bad and ugly.”

In the wake of the Cedar Shoals scandal, other reports have surfaced of a lack of discipline and administrators ignoring violent incidents in local schools. Foster Daniel, for example, told the board that another student broke his daughter’s hand in December. “I had to move her to another school district because she was afraid to go back in that building,” Daniel said.

Daniel said he met with Principal Tony Price and even filed an open-records request looking for answers. “I haven’t gotten anything from anybody,” he said. “A lot’s been said, but nothing’s been done.”

This plays into the most common criticism of Lanoue—that he’s more concerned about perception than reality. “The man is good at promoting himself, which means minimizing any sort of bad news that could hurt his reputation,” one local political observer told me. (In a sign of Lanoue’s influence among the local elite, many of his critics remain reluctant to go on the record even when he has one foot out the door.)

Some parents have even suggested that Lanoue covered up the Cedar Shoals incident until the Fulton offer came through. “That is absolutely not true,” district spokeswoman Anisa Sullivan Jimenez said.

For their part, Fulton officials don’t seem too concerned. “The attorney who managed the search process has shared that the search committee learned about this matter just prior to making the sole finalist announcement,” said Samantha Evans, a spokeswoman for the Fulton system. “We are confident that Dr. Lanoue and his staff have a system in place to appropriately handle the situation.”

As the community was reeling in Athens, Lanoue was in Phoenix for a ceremony to honor the 2016 national superintendent of the year. Filling in at the board meeting, Assistant Superintendent Ted Gilbert used the classic passive voice of PR crises: “Protocols were not followed,” he said. “Mistakes were made. There is an investigation.”

Former CCSD teacher Karen Sweeney Gerow has suggested that the failure to discipline the accused students or alert the public resulted from a misinterpretation of the Family Education Rights and Privacy Act, a federal law that both protects the privacy of certain student records (such as grades) and enshrines the right of students and their parents to access those records. FERPA should not have prevented officials from suspending the accused students (or at least moving them to a different school while the legal process played out), nor should it have stopped them from alerting the Cedar Shoals community.

Schools frequently read FERPA too broadly or try to use it as an excuse to keep embarrassing information, to paraphrase Frank LoMonte, executive director of the Student Press Law Center (and UGA graduate), in an interview with the Education Writers Association. Public safety exemptions in FERPA “allow for disclosure even of identifiable, confidential student data when there is a threat to public safety and the disclosure is necessary to abate that threat,” LoMonte said. Three accused rapists roaming the halls of a high school sounds like a threat to public safety to me.

Someone in the school district thought differently. Principal Tony Price is taking the fall—he was placed on administrative leave Friday as an internal investigation continues—whether he’s responsible or not.

Flagpole has filed an open records request to try to establish what actually happened. In addition, the results of the internal investigation may be released as early as Monday. Whatever turns up, the Cedar Shoals PTO has scheduled a forum on the scandal for 6 p.m. Wednesday, Feb. 17 at the high school. Hopefully, answers are coming soon.

Athens Power Rankings for the Week of Feb. 15