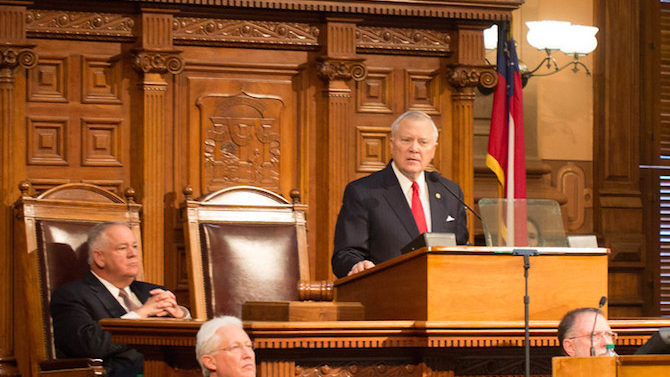 In addition to local budget planning, Gov. Nathan Deal submitted his proposed fiscal 2017 state budget to the legislature last week. It’s the largest in Georgia history at nearly $24 billion, indicating that the Great Recession is behind us—at least as far as government revenue is concerned.

The budget includes good news for teachers and other state employees, who for years saw their salaries cut or stagnate but are in line for 3 percent raises this year or more, in the case of high-turnover jobs like prison guard and social worker. Gov. Sonny Perdue’s “austerity cuts” to education are now down to $150 million from a high of more than $1 billion. Presumably UGA employees can expect raises, too, although the Board of Regents will not set its budget until the legislative session ends.

The budget includes about $850 million in new revenue from the massive Transportation Funding Act passed last year. Most of the money will be directed to easing traffic in metro Atlanta, but some of those projects will benefit Athens residents, too. For example, the Georgia Department of Transportation is widening I-85 to six lanes from Jefferson to Buford and adding more HOV lanes south of Highway 316. Plans also call for four-laning Highway 441 between Madison and Eatonton, although not the stretch between Watkinsville and Madison. Federal officials have refused to pay to widen that stretch due to archeological sites along the proposed route. Now GDOT is considering building a bypass around Bishop solely with state funds, but it would most likely be two lanes.

Locally, Athens is in line for $7.5 million for bike and greenway projects and will see an uptick in road-repaving money, some of which could be spent on other infrastructure, like sidewalks. The TFA also could allow GDOT to expedite the new Loop interchange at Lexington Road, where the current configuration causes huge traffic jams each rush hour, according to ACC Transportation and Public Works Director David Clark.