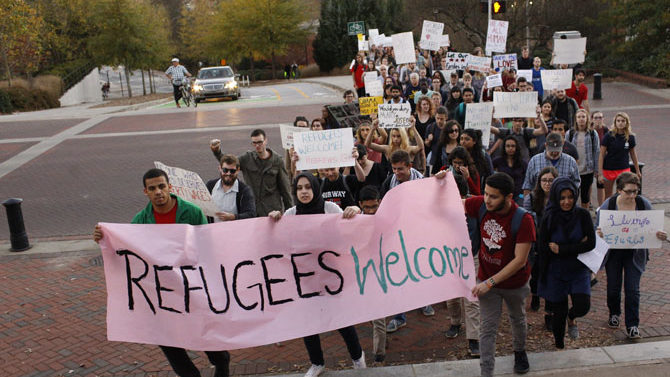 Talking to your Fox News-loving drunk uncles is going to be even less fun this Thanksgiving than it usually is, thanks to ISIS.

Last week, Gov. Nathan Deal followed in the footsteps of other mostly Republican governors by declaring that Georgia won’t accept any refugees from war-torn Syria (see Capitol Impact for more), although states don’t have any authority to do so. The Department of State works with nonprofits and city governments to resettle refugees, who are subject to an 18–24-month vetting process that includes checking their fingerprints against international terror databases. (The process works: Out of 785,000 refugees brought here since 9/11, only perhaps a dozen had ties to terrorism.) On a national level, Congress is considering legislation to stop President Obama from bringing 10,000 Syrian refugees to the U.S.

This is nothing new here in Athens. Two years ago, Mayor Nancy Denson opposed the Atlanta-based International Rescue Committee when that group wanted to resettle 150 refugees, including some from Syria, in Athens, arguing that local service providers were unprepared. When asked recently about the status of the program, Denson gave a curt answer: “The state department’s not funding it,” she said. “Not right now.”

About 200 UGA students with Arabic and other backgrounds marched through campus last Thursday in support of bringing Syrian refugees stateside. “We think the executive order [Deal] released is largely political, not legally binding,” said Rafael Eissa, a member of the UGA Arab Cultural Association whose parents are Egyptian. “We think it perpetuates racism, hate and xenophobia that’s unfounded.”

The current crop of UGA freshmen wasn’t even in kindergarten yet on Sept. 11, 2001. Those attacks unleashed our nation’s basest instincts, leading to rampant xenophobia and bigotry against anyone who even appeared to be Middle Eastern and hundreds of hate crimes, not to mention two wars. (Things got so bad in Alabama that my extremely Irish Catholic mother, tired of the suspicious glares and comments, started telling people that her Lebanese last name was Spanish.)

Though it hasn’t grown to such hysterical proportions after the recent ISIS attacks on Paris and Beirut, those attitudes have returned, as shown by the political grandstanding over Syrian refugees. On campus, an email sent by a UGA employee circulated widely warning people about a man with a flag with Arabic writing on it. Police investigated and quickly realized the suspicious character was merely a Saudi Arabian student who’d attended an international event earlier that day.

“You can’t expect to go to an American college, especially in the South, and not experience some racism, some bigotry,” Eissa said. “I do think it’s a safer space than other campuses.”

At the rally last week, students politely debated Middle Eastern and U.S. politics and history and tactics for bringing others to their side. That’s how it should go, not just on a college campus, but everywhere. So when Pawpaw starts ranting about refugees as you pass the dressing, remember what Muslim student Amaan Charaniya told the crowd: “People might not share our opinion, but it’s our job to educate them. You guys have an advantage: Your argument is based in fact.”

Downtown Discrimination: Last week’s article by Evelyn Andrews on downtown bars that employ dress codes to keep out African Americans struck a chord, garnering more than 5,000 online views and prompting dozens of readers to chime in with their own accounts of being denied entry to bars based on their ethnicity. With the problem now out in the open, three Athens-Clarke County commissioners are urging their colleagues to act. While federal law already prohibits businesses from discriminating on the basis of race, commissioners Mike Hamby, Kelly Girtz and Andy Herod wrote a letter to Denson and other commissioners Friday saying that they want to pass a local anti-discrimination ordinance “that clearly states for those who live here, work here, do business here, learn here and visit here that Athens, GA will not tolerate discrimination of any form.” Such an ordinance could allow the county to take away the alcohol licenses of bars that discriminate. The three commissioners said they’ll be working on specific language this week.

Taxi Meters: A new state law regulating taxis and ride-sharing services like Uber requires that all taxis have meters, and that’s a problem in Athens, where cab companies deal with high demand from late-night bargoers by cramming several groups with different destinations into vans, making metering impossible.

The commission’s Legislative Review Committee, chaired by Girtz, thinks it’s hit on a solution: Use meters most of the time, but allow cabs to charge each passenger a flat rate from 8 p.m.–4 a.m. Wednesday–Saturday and on special events like game days. During those times, the county would be divided into three zones, with fares of $5, $7 and $10, respectively. Zone 1 would consist of downtown, surrounding neighborhoods, East Athens and campus; Zone 2 would include neighborhoods west of Cobbham and Boulevard and inside the Loop; and Zone 3 would be anywhere outside the Loop. But other commissioners had questions about the zones, so the proposal will likely be held for further tweaking at the December voting meeting.

The proposed maximum metered fares would be $4 to get in the cab, $2 per mile and $3 per additional passenger. (From the airport, the initial charge would be $8.) The legislation also designates loading zones on Broad, Hull, Lumpkin and Jackson streets and College Avenue as taxi stands.

Free Parking: Like lunch, any economist will tell you there’s no such thing as free parking, but the Athens Downtown Development Authority won’t charge you for it on Black Friday or the following Saturday. Both decks and on-street parking will be free, although the two-hour on-street time limit will be enforced, so #buylocal and shop your ATH off.