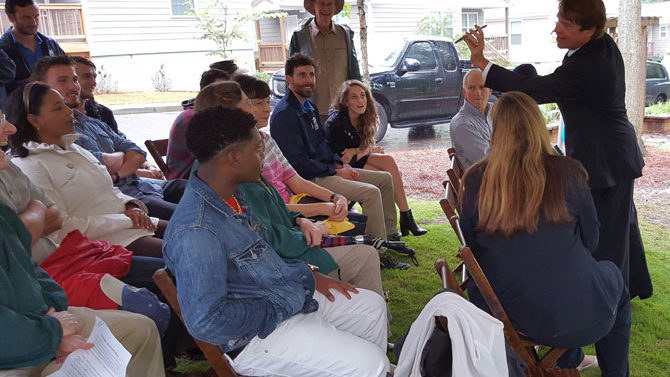 No one with an open mind could have walked away from Jim Porter’s presentation on climate change last week believing that it doesn’t exist or it’s not our fault.

Porter, a University of Georgia ecology professor, gave his presentation as part of Athens Uniting for Moral Climate Mobilization, a new group formed by Tom Thrasher to address climate change on the local level. Porter didn’t mince words about the challenge ahead of us. “This is of a magnitude that dwarfs anything humans have ever faced in the past,” he said.

Thanks to 70 years’ worth of data from a Mauna Loa, Hawaii observatory, we know that the amount of carbon dioxide in the atmosphere is rising by about seven billion tons per year. The rise in global temperatures corresponds almost exactly to what scientists would expect that increase in carbon dioxide to produce. And satellite imagery pinpoints exactly where all that carbon dioxide is coming from: big cities and power plants, ebbing and flowing through winter and summer, night and day, just as you’d expect if humans burning fossil fuels were responsible for pumping out all that CO2. “There is no scientific basis for climate change denial,” Porter said. 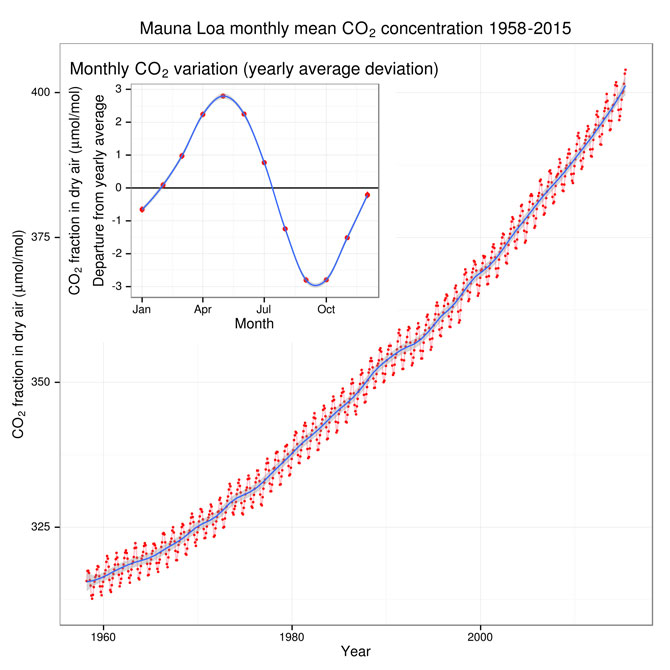 The Keeling Curve—based on daily observations since 1958—shows how the concentration of carbon dioxide in the atmosphere has risen. Both the year-to-year increases and seasonal variations correspond to the amount of fossil fuels burned.

Yet even when faced with the fact that the 10 hottest years on record all occurred since 2001—last July was the hottest July ever in Athens—our elected leaders (mostly Republicans) are acting as if the problem doesn’t exist, or there’s nothing anyone can do. “There is no debate,” Porter said. “It is unethical to lie. And many of your politicians are lying through their teeth about this.” (Let’s hope Dr. Porter has tenure.)

It will only get worse. The amount of carbon dioxide in the atmosphere is expected to double by 2050, which corresponds to temperatures rising by 4–9 degrees. That means the Greenland and western Antarctica ice caps, which are already melting, will melt faster and faster, and sea levels will rise by 40 feet by the end of the century. To put that in perspective, if sea levels rise 15 feet, Savannah will be completely underwater. At 25 feet, salt water begins to flow into South Georgia from the Gulf of Mexico.

“Do you still have a seat in the legislature if you have no county seat?” Porter wondered. (At this point, the legislature’s probably more apt to defund the whole Odum School than tackle climate change.)

While people in Athens will be relatively insulated from the effects of climate change due to our elevation and temperate climate, South Georgia and its agriculture will be devastated. It will make the Syrian refugee crisis look like TomorrowWorld. In Athens, with one of the highest poverty rates in the country, we’ll face food and water shortages.

“This is not a totally impossible situation,” Porter said. “I’m not saying it’s going to be easy, but we can do it.” A few simple steps—taking public transit, adjusting your thermostat, recycling, installing LED light bulbs, eating locally grown food—can significantly reduce CO2 output, he said.

From a local policy standpoint, Commissioner Melissa Link suggested standing up to development interests and “small, mundane things,” like solar arrays on Athens-Clarke County property and more sidewalks. But, “We can’t do anything without the mayor,” she noted, urging people to speak out at meetings.

“This town has a reputation for being a progressive town, and we’re not,” said Athens for Everyone organizer Jesse Houle. “The reason we’re sliding into becoming a conservative town is we’re afraid to stand up for what we believe in.”

While ACC officials talk a good game, they don’t always back it up. Just look at the budget, BikeAthens Executive Director Tyler Dewey said. “There’s a disconnect between what the Mayor and Commission says its goals and objectives are and where the money goes,” he said.

The event drew a good crowd—at least 100 people—but keep in mind they were 95 percent white liberals.

Bob Inglis, a Republican former South Carolina congressman, may have provided a free-market way forward for conservatives during a recent visit to UGA: Accept the science, then negotiate a global treaty removing energy subsidies and taxing carbon while cutting other taxes to stay revenue-neutral.

The poor and working class and African Americans in particular are already bearing the brunt of climate change and the natural disasters it’s wrought, and they’ll continue to do so in the future. The Economic Justice Coalition’s Linda Lloyd said she never listened when the late Ray McNair talked about climate change because low-income folks are worried about paying bills, but now she realizes, “You can’t worry about having no house if you have no planet to put it on.”

Brewery Battle: When the state legislature approved a watered-down version of the so-called “beer jobs bill” last spring, most Georgia craft breweries hailed it as a small victory. But new Department of Revenue regulations made public last week now threaten to force some breweries out of state.

Senate Bill 63 did not, as breweries had wanted, allow breweries to sell beer directly to the public, rather than the existing byzantine system of charging for souvenir glasses to hold the free beer given away on free tours. It did, however, allow breweries to charge for tours that include packaged beer to take home. Or so they thought.

As first reported by Creative Loafing, DOR issued regulations last week barring breweries from charging different rates for different tour packages based on the value of the beer (i.e. $10 for 36 ounces of beer to drink at the brewery or $20 for that plus 72 ounces to take home), which defeats the whole purpose of the law.

Terrapin has already threatened to move to South Carolina—though it sounded more like a negotiating tactic to wrest taxpayer concessions from the city—and now Creature Comforts could build a second facility out-of-state rather than expand in Athens. Creature Comforts has already begun site selection for a new production facility to come online in 2017, co-founder Adam Beauchamp told CL writer Austin L. Ray for a Beer Advocate article. (Plans are to keep the downtown Athens brewery as a tour location and use it more for one-offs and special releases while moving regular production elsewhere.)

“As much as we’d like to keep the new facility close to home, there is a strong pull from other states that have less restrictive laws and regulations,” Beauchamp said. “If Georgia continues to push back against our budding industry, it will lose out to neighboring states.”