When of Montreal’s Kevin Barnes sold a song to a steakhouse chain, locals roundly ridiculed him as a sellout. That very ‘90s attitude is now, in certain quarters, back with a vengeance, aimed at anyone associated with Urban Outfitters, the faux hipster chain that recently opened downtown to the sound of thousands of hands wringing, and is using Athens’ bohemian cachet as a marketing tool. It’s emblematic of so many things that are wrong with our city—gentrification, loss of identity, rage at things we can’t control at the expense of long-term policies that could shape Athens into what we want it to be.

For years, we’ve watched as gameday condos and luxury apartments came to dominate the skyline, and students—bless their hearts—started creeping over the khaki line, taking over spaces like Little Kings (now 25 and up on weekends) that once were the beating heart of the townie arts and music scene that made downtown so desirable in the first place. Older scenesters, now grown up and having babies, retreated to Normaltown and Chase Street.

With the growing success of the Chase Street Warehouses, the time is right to bring the other crumbling old industrial structures around the railroad tracks back to life. One is Southern Mill, a denim factory off Oneta Street that closed in the mid-1990s. People have been talking about what an opportunity that mill is since the Doc Eldridge administration. Now, finally, 15 years after Atlanta mill loft specialists Aderhold Properties filed plans that never came to fruition, a Watkinsville consortium called MillWorks is ready to move forward with converting the four slowly collapsing buildings on the site into 109 one- and two-bedroom apartments and commercial space. It’s a very cool project that has the support of the Boulevard Neighborhood Association and the Athens-Clarke Heritage Foundation.

The neighborhood—called Happy Top, apparently—roughly between the tracks and the Loop was once filled with thriving factories and housing for employees. “You have a character there—frisky is a good word for it. Lots is going on, and lots can go on,” Pratt Cassidy, a UGA College of Environment and Design professor who led a design session for Southern Mill in 2012, said at a recent forum organized by community activist Michael Smith, who owns property nearby.

And it can be that way again. “With Boulevard on one side and Newtown on the other, it’s really blowing up,” ACC Commissioner Melissa Link said.

“I can see a migration to industrial warehouses in this area,” added ACHF board president (and Flagpole contributor) Kristen Morales.

The Millworks developers, as developers so often do, swear this project isn’t meant for students. “If you look around, there’s really nothing for what is sort of the heart of Athens, people who are going to be here longer than four years,” Millworks representative Carter Broun said. But come on. The rent is going to be expensive as hell, and students’ parents are the only people who can afford to pay it.

The problem is, in Athens, everybody’s broke. If you’re a “creative” (ugh), you either work for the university, or you wait tables and make your music/paintings/vegan cupcake scarves on the side. You’re not paying $1,200 a month or whatever for an apartment. The whole operation, historically, has been fueled by cheap rents at old houses within walking distance of downtown. Inclusionary zoning—whereby developers are required to set aside a certain number of affordable units—could be an answer, but that’s another thing we’ve been circling around for years.

The DIY spirit our broke-ness creates—when it doesn’t tip over into wide-eyed Instagram naiveté or PBR-fueled fatalism—is one of the most appealing things about this town. But that bloomin’ onion of corporate cash let Kevin Barnes quit his job and make music full-time, so if Urban Outfitters wants to come in and make it rain, of course people are going to take the money and run. Maybe it’ll be enough to pay the rent at Southern Mill. 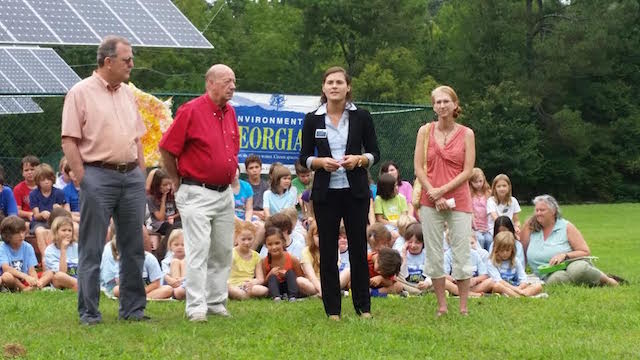 Selling Solar: Solar power in Georgia grew by 37 percent last year, but the state ranks just 20th in solar capacity per capita, down three spots from last year, according to a report by Environment Georgia. The small-but-growing sector employed 2,890 Georgians last year.

The environmental group wants Georgia to get 15 percent of its power from solar by 2030, they said at an event last week at Athens Montessori School, which installed solar panels to power the school three years ago. A new law making it easier to finance solar panels on home and business rooftops could help meet that goal—Georgia has 1.2 million rooftops that are suitable for solar. So could President Obama’s clean power plan; solar power alone could meet at least half of the plan’s pollution reduction targets.

But additional policies are needed, according to Environment Georgia. They noted that the top solar-producing states all have clean energy requirements and stronger laws allowing customers to sell excess power.

Wendy’s: The fast-food restaurant on Prince Avenue that was damaged by fire in February is being rebuilt. Much as I love spicy chicken sandwiches, that’s too bad. Something better than a drive-through could be built at that location.

Cobb House: Thirty years ago, when the antebellum T.R.R. Cobb House on what’s now St. Joseph’s Catholic Church property was threatened with demolition, Stone Mountain preservationists stepped in and moved it there. The Watson-Brown Foundation brought it back in 2005 and restored it (including repainting it the original salmon color). It’s served as a house museum at 175 Hill St. ever since. To commemorate the move to Stone Mountain Park, the T.R.R. Cobb House is featuring artifacts found at the original site during a 2015 dig, as well as photos and documents about the house’s colorful past. “Finding Our Place in the Past,” an opening reception, is Friday, Sept. 11 from 6–8 p.m.

This Ought to Be Good: The Federation of Neighborhoods, after taking a break for the summer, is hosting a forum with our local legislative delegation, who will be questioned by commissioners Link, Dickerson and Hamby. It’s at 7:30 p.m. Monday, Sept. 14 at Cine. Free parking at the Chamber of Commerce next door.

Food Truck Festival: In 2012, Athens-Clarke Commissioner Mike Hamby organized a downtown food truck festival to show that food trucks could be successful in Athens. With the commission finally poised to pass a law allowing food trucks to congregate around City Hall on Thursdays, the Athens Downtown Development Authority is bringing the street-food festival back to “College Street,” as the promotional materials refer to it, from 11 a.m.–6 p.m. Saturday, Sept. 12. Food trucks on hand will include Island Chef Mobile, Gotta Have It, On Tapa the World, Holy Crepe, Tasting Maine, Blaxican, Mixed Up Burgers, Filipino, Wow, Toasted Cheese, That Pie Place, Tracy’s Tasties Cheesecake and Sweet Jeanius. Only one of these food trucks is from Athens. The festival was organized by Atlanta Creative Events’ Jim Shumake and PREP, the Atlanta shared commercial kitchen. Yes, this is the Athens Food Truck Festival in downtown Athens.