The Bishop Park Master Plan Is Getting Caught Up in Politics 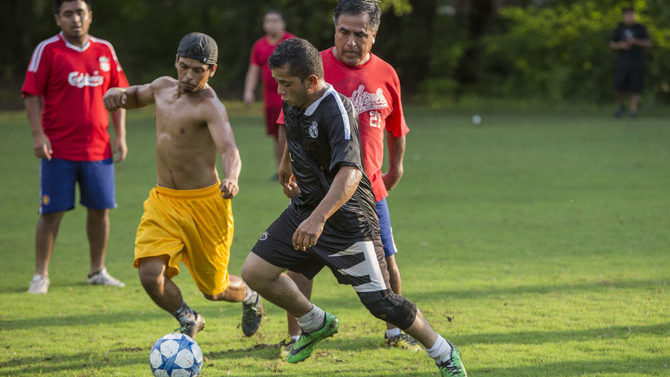 Commissioners might pump the brakes next week on a master plan for Bishop Park.

“I just feel this master plan… has not gotten the public vetting it really needs,” Commissioner Melissa Link said at the agenda-setting meeting. “Bishop Park is too big, too important and too loved not to get it right.”

While commissioners universally like the idea of opening up the park—especially on the Hawthorne Avenue side—with more gates and paths to connect the neighborhoods on either side, other aspects of the master plan are coming under scrutiny.

In particular, some commissioners are concerned about the $20 million price tag and the order in which Leisure Services wants to phase projects within the park. (Those projects will include revamped parking, two new multi-use fields, a new pavilion and a new, larger gymnasium.) Most of the money likely would come from a future SPLOST.

Bishop Park’s facilities are 20–40 years old, and it has never been renovated. Nonetheless, Commissioner Sharyn Dickerson said that Southeast Clarke Community Park doesn’t have “nearly the resources” as Bishop—even though Southeast Clarke is less than 15 years old, and ACC already is planning to build a new dog park and playground there.

“I can’t go to sleep at night saying let’s give it all to the Westside when there’s needs on the Eastside as well,” Dickerson said.

She also said she wants to focus on revenue-generating activities. “You don’t get money from people throwing the ball around,” she said, although Leisure Services doesn’t turn a profit on any programs; some just lose less money than others.

“I know there are needs for other parks, but this is an important park,” Commissioner Jared Bailey said. About 400,000 people visit Bishop Park annually, and Leisure Services officials believe better pedestrian access and signage would boost that number even higher.

Commissioner Harry Sims’ answer? A master plan for master plans for all the parks.

“Certainly, if we’re spending money on parks, I’d like to take a broader look at that,” Commissioner Mike Hamby said.

Every site has its pluses and minuses. The YWCO has been all but eliminated, since the organization asked for an exorbitant amount of money to locate the tennis center there, and commissioners believe it’s more suitable for perhaps a mixed use development. (The YWCO has wanted to sell its land and move to Oconee County for years.)(Update: The YWCO has decided to both build a new facility in Oconee County and keep the one in Athens, according to board member Chuck Toney.)

Hamby and Commissioner Andy Herod, who chair study committees on revitalizing Atlanta Highway and Lexington Road, respectively, are lobbying to locate the center on one of those two aging corridors. “These are public dollars we can use to stimulate some private sector economic development,” Herod said, although the extension office only draws about 200 visitors a week.

NeSmith, however, said he’s opposed to taking the Ben Burton Circle property off the tax rolls. And Link said another type of development would benefit Atlanta Highway more than the extension office.

Commissioner Diane Bell, meanwhile, wants it located on the UGA property. It’s located near other agricultural functions, has bus service, and UGA has assured her the lack of sewer cited as a drawback by county officials isn’t an issue, she said.

All this jockeying is taking place even though the commission is only voting on six sites that deserve further study. They’re not picking a site Sept. 1.

Aging in Place: While “aging in place” generally refers to housing for seniors, couldn’t one age in place from 18–22, too?

That’s what Five Points residents—and, it seems, a majority of commissioners—think will happen in a subdivision at the intersection of Springdale and Rocksprings streets proposed by developer Jared York. Although the ACC Planning Commission recommended approval of a rezoning and several waivers earlier this month, county commissioners appear poised to reject the plan, in large part due to questions about who will buy and live in the housing units.

“I did ask the question, ‘If you’re marketing to seniors, why don’t you go the extra step and guarantee it will be for seniors?’” Hamby said. “And the response was, ‘Well, I just don’t want to take the risk.’ I’m at the point where I don’t think the neighbors are willing to take the risk, either.”

Although York has said the 14 attached units will be marketed to buyers 55 and up, he has refused to write a minimum age into covenants. And as Bailey noted, York is the same developer who promised King Avenue residents he wouldn’t cut down a big old oak tree, then did it anyway.

The proposed units are two stories and do not include elevators, and handicapped access is limited. “Aging in place” is an architectural concept that includes features like wheelchair-width doors and hallways, no-threshold showers and an open floor plan, NeSmith said. “These are things people need to get old in. If the [development] doesn’t have these things, those architectural standards—no, it is not aging in place.”

“To me, these say student crash pads or game day party pads,” Link said. “There’s nothing about this that accommodates people aging in place.”

The fear is that buyers will find ways to circumvent ACC’s two-unrelated law and either allow their children and children’s friends to live in the units while in school or rent them out. While Five Points certainly has its share of rental units, York is asking to more than double the density allowed on the property, which could create additional noise, traffic and parking problems for neighbors.

“This has all the hallmarks of a bait-and-switch, and I’m not interested in it,” Commissioner Andy Herod said.