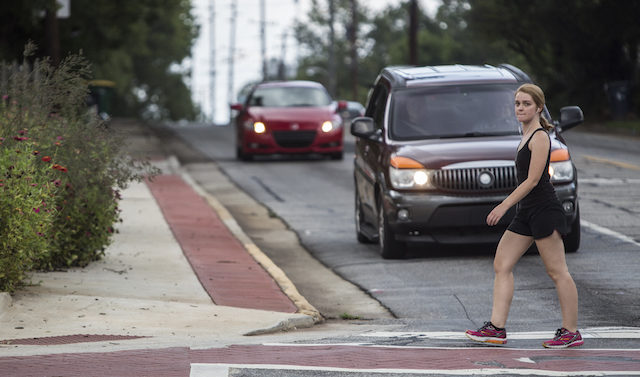 Boulevard residents are still pushing for a truly complete Chase Street as Athens-Clarke County commissioners ponder adding bike lanes to a small portion out near the Loop.

Chase Street is due to be repaved, and the ACC Complete Streets policy requires the commission to consider reducing four-lane roads to three lanes and adding bike lanes. Problem is, only about a block of the part of Chase Street that’s being repaved is four lanes. The commission already voted in 2010 to keep nearby Newton Bridge Road four lanes, due to concerns from industries in the area, and Chase Street south of the Loop is already three lanes and too narrow for proper bike lanes.

But it’s also filled with cyclists and pedestrians. Twice as many students (160) walk or bike to Chase Street Elementary as are picked up by car, Tony Eubanks told commissioners at their Tuesday, Aug. 18 agenda-setting meeting.

“It’s nerve-racking,” Mike Bradshaw said. “I have three small children. I walk past the Bread Basket every day, and it makes me very nervous.”

Between the Loop and Boulevard, Chase Street is probably just barely wide enough to narrow the vehicle lanes and add bike lanes, though they might not measure the five feet width that alternative transportation advocates prefer. South of Boulevard, the road narrows even more, but more pedestrian islands could be added.

Commissioner Melissa Link, who represents Boulevard, is pushing for staff to do a study of the entire street, rather than simply put forward a plan to three-lane a small chunk. A holistic plan for Chase could connect neighborhoods now separated by the Loop, as well as encourage revitalization of some of the abandoned industrial areas north of the railroad tracks.

“I feel like it’s really important that we address the entire street and ensure the safety of the folks who use it and encourage more people to use it,” Link said.

A commission vote is scheduled for Tuesday, Sept. 1.

Southern Mill: A couple of years ago, a group of Oconee County developers announced they would pick up the ball on a decade-old plan to renovate the old denim mill off Chase Street into live/work spaces for artists. Nothing ever came of the project, but recently, the development group refiled the plans, although they were later withdrawn to tweak some things.

Michael Smith, a local activist who owns property near Southern Mill, has organized a forum from 4–6:20 p.m. Tuesday, Sept. 1 at Hendershot’s where we can learn more about the project. Link, Commissioner Kelly Girtz, Thinc UGA, College of Environment and Design graduate students, WGAU 1340 AM radio host Tim Bryant and others are participating in the forum, which will focus not only on Southern Mill, but Complete Streets and the revitalization of Chase Street in general, according to Smith.