A Detente in the Black Neighborhood with an Old South Fraternity 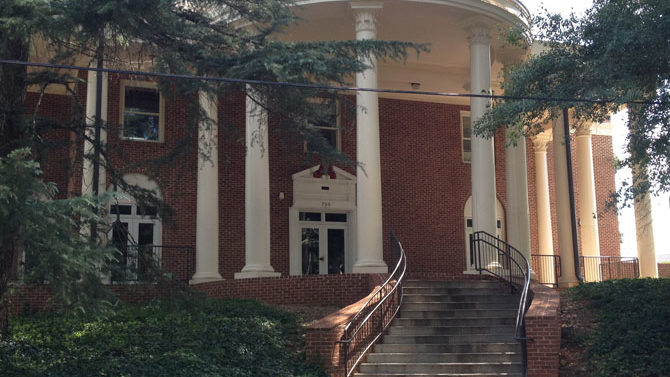 Early on in Danielle Beverly’s documentary Old South, Major Brennan, at the time the vice president of the University of Georgia’s Kappa Alpha chapter, is shown struggling to explain why he (and back then, his fraternity) displayed the Confederate flag.

The flag in his room is “a joke,” Brennan says at first. Then, he says the Civil War really had nothing to do with race. Southern whites didn’t HATE black people—they just didn’t want Yankees taking their property. It was about money, not skin color, you see.

This jarring justification for three centuries of brutality and exploitation is painful to watch. (Though not uncommon: In high school in Alabama and even in college in Mississippi, I regularly had to listen to white classmates justify slavery.) First comes anger; then you feel bad for Brennan, who clearly hasn’t thought this through and later emerges as a sympathetic figure. To even train a camera on him and not blink as he exposes his own stunning ignorance was a courageous act on Beverly’s part.

Beverly spent more than three years documenting the KAs’ move into the historically African American Hancock/Reese Athens neighborhood in 2006 and residents’ reaction to it. (Flagpole interviewed her for our July 15 issue.) She screened the film for a diverse audience of more than 300 people on July 23 at Hill First Baptist Church, the epicenter of the fight to keep KA out.

A handful of KA members attended the screening but quickly left. Beverly speculated that they couldn’t stomach the scene where Brennan offers his views on the flag.

That’s too bad. If they had stayed for the entire hour-long film, they’d have witnessed a reconciliation between the predominately black church and neighborhood and the fraternity with its roots among the landed gentry of the antebellum South. By the end, white fraternity brothers are working alongside black residents in a community garden, dining at a church fish fry and tutoring neighborhood children.

It’s a strange experience to watch a film in which one witnessed the events onscreen in real life many years ago. I covered the KA fight extensively for the Athens Banner-Herald. Yet Beverly, having fully committed to this one story and working in a different medium, teased an arc out of what, from a journalist’s standpoint, had simply petered out.

Unfortunately, the story eventually did peter out. The KAs never did take Hill First Baptist members up on their invitation to attend services. And after the initial cohort of frat brothers graduated, the new ones lost interest in the garden and the tutoring program, said Hope Iglehart, a neighborhood leader and one of the main voices in Old South.

What showed promise as an unlikely friendship turned into mere detente. “We just sort of do our own thing,” Iglehart said. “We respect each others’ space. When we see each other, we wave.”

Both sides have retreated—the KAs into their brick mansion, undoubtably treating the neighborhood as a place to walk through on their way to and from the downtown bars, rather than one with a rich history, cultural significance and (increasingly few) longtime residents. Gentrification continues apace, with young white professionals moving into one of the few affordable intown neighborhoods left in Athens, and investors snapping up property for towering student rentals.

Meanwhile, Iglehart, suffering from burnout, has stepped back from the public sphere. “That was my social life: community work,” she said. “I realized, ‘You know what I need? Some time to myself.’”

Closing Newton: The Athens-Clarke County Commission’s Downtown Master Plan Implementation Committee is working on a proposal to close off the block of Newton Street between Meigs Street and Prince Avenue (currently one-way southbound) to create what has been referred to as a “European-style” outdoor cafe for The Grit and Taziki’s (yes, that’s how they spell it). “It becomes a neighborhood open space, and it takes The Grit’s outdoor eating out of the 55 mile-per-hour zip zone,” downtown master planner Jack Crowley said.

But it may have a hit a few snags. Parkside Partners, the Atlanta company that owns the Bottleworks, has objected, because “they see Newton as the primary entrance to the Bottleworks and the Bottleworks parking lot,” Commissioner Melissa Link said. Some neighborhood residents, too, are opposed, because they see traffic turning from Prince onto Newton as a traffic-calming measure, she said.

Still, committee members want the full commission to ask the Transportation and Public Works Department to evaluate the proposal, noting that there will be public hearings and another commission vote if TPW wants to move forward.

Downtown Construction: Downtown merchants can be forgiven if they were alarmed when the Athens Banner-Herald reported last week that long-planned sidewalk and utility work on Clayton Street may take place during the UGA football season.

ACC officials quickly issued a statement clarifying that no such decision has been made. The project is behind because no one bid on it earlier this year, but bidding has been reopened, and the commission could choose a contractor Sept. 1.

No timeline has been set, but any work that takes place in the fall is likely to be surveying or locating utility lines, and most heavy work will take place in 2016, SPLOST officials said. In any case, the contractor will be prohibited from working between Thursday afternoon and Monday morning on game-day weekends, as well as during the holiday shopping season.

Yard Sale: There is a neighborhood-wide yard sale in various yards along Boulevard Saturday, Aug. 8. For all you pickers, it starts at 8 a.m. For all you hungover folks who might wander down there after your third cup of coffee, it ends at 2 p.m., and all the vintage Love Tractor T-shirts will be long gone.