In a Circus of a Trial, Jamie Hood Blames Everyone But Himself 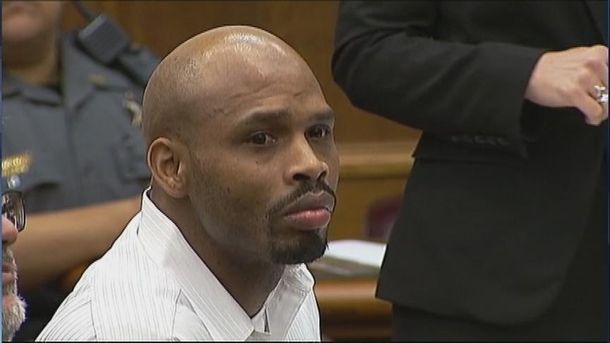 If you trace it back to the beginning, Officer Buddy Christian died for $3. That’s how much money a pizza delivery driver turned over to Jamie Hood in 1997, when a 19-year-old Hood pointed a gun at the college student’s head and demanded his money.

Hood served 12 years for the armed robbery. While he was in prison, his brother Timothy was shot and killed by a police officer in 2001. The officer, responding to a report of a burning car near the old Kroger (now the Omni Club) on West Broad Street, found Timothy Hood hiding in some bushes. A drunk and coked-up Hood lured the officer close by telling him he was a drug informant, then put a gun to the officer’s head. Fortunately for the officer, Hood forgot to chamber a bullet. While they struggled, the officer pulled out his own gun and shot Hood twice.

We’re not talking about Walter Scott here. Other than a minor discrepancy between the initial incident report and the autopsy report, Jamie Hood provided no evidence to contradict the official story about his brother’s death. Yet, “Clarke County shot [my son], and we still don’t know what happened,” their mother Azalee told the Athens Banner-Herald in 2011.

Also while in prison, Jamie Hood hooked up with an Atlanta drug connection. After being released in 2009, he and a couple of friends, Judon Brooks and Kenyatta Campbell, started moving serious weight. But Brooks and Campbell cut out Hood, who visited Brooks’ best friend, an Athens-Clarke County government employee named Omari Wray, to find out where Campbell was. When Wray wouldn’t tell him, Hood shot and killed him in front of his own house while his mother was inside.

Then Hood invited Brooks over to his house, where he tied him up and shoved him into the trunk of his car, intending to drive him to Atlanta and kill him. Brooks escaped while stopped at a light on Lexington Road.

Not long after, Officer Tony Howard spotted another brother, Matthew Hood, leaving an apartment complex off Sycamore Drive—just blocks from where Timothy Hood died. Howard pulled over Hood’s SUV. Jamie Hood jumped out. When Howard reached out of the window to grab him, Hood shot Howard in the face. “It was kill or be killed,” Hood said. Officer Christian pulled up, and Hood shot him, too.

He went on the run for four days before turning himself in on live TV, saying the cameras would keep police from killing him like they killed his brother. It’s a theme Hood (who represented himself after firing two sets of attorneys) came back to again and again during his trial, which wrapped up Friday, July 24 with a life sentence. (As uncomfortable as I am with the death penalty, how District Attorney Ken Mauldin didn’t get it in this slam-dunk case is beyond me. The jury was from Elbert County, not bleeding-heart Clarke.)

“Don’t let them do you like they did me,” Jamie Hood said Timothy’s voice told him before he shot Howard, then Christian, because that officer was a witness to the first shooting.

Hood’s defense, such as it was, centered around what he portrayed as a vast conspiracy by corrupt law enforcement. He tried to put the victim on trial, labeling Howard a dirty cop (as if that would justify shooting him, even if he were Denzel Washington in Training Day). He laid Christian’s death at Brooks’ feet for snitching. At one point, he blamed his brother Matthew for missing a turn and getting pulled over. He even blamed Howard for getting himself shot by not using more caution when stopping Matthew. He sold drugs, because he couldn’t find work due to his felony conviction (a conviction he said was “unlawful,” even though it was upheld twice). Police and jailers treated him “like a slave.” It was everyone’s fault but his own.

“I feel like I’m not a cop killer,” he told the jury during the sentencing phase, even though he admitted killing Christian and the jury had already convicted him of it. Jurors took just five hours to find him guilty on 36 counts of a 70-count indictment. (Oddly, for a man facing lethal injection, Hood seemed proud of himself for beating a few of the more minor charges.)

Society did fail Jamie Hood. His father and five of his six brothers repeatedly ran afoul of the law. He was kicked off the Cedar Shoals football team for fighting in ninth grade and never graduated, although he’s obviously naturally bright. “Jamie was one of those kids you worried about,” former Jaguars coach John Osborne told the AJC. Guess nobody worried enough.

We have a more enlightened attitude about crime today than we did in the Giuliani ‘90s. Punishments are less harsh. More rehabilitation programs are available. Maybe Jamie and Timothy Hood—and Omari Wray and Buddy Christian, and Tony Howard’s reputation—could have been saved. But Jamie, while blaming others, never owned up to his own decisions—to rob, to traffic drugs, to kidnap, to shoot rather than surrender.

“I don’t want to see no kid, no people end up like me, in my position” he said, explaining why he fought the charges. That’d be easier to swallow if he hadn’t spent four weeks making himself out to be the real victim.

Wetland Buffer Drama: It’s looking like an Athens-Clarke County Commission vote Tuesday, Aug. 4 on creating buffers to protect local ponds and wetlands will be one of those litmus-test issues. Keep your eye on who votes which way.

At issue is a recommendation from a committee stacked by Denson with industry and development folks against enacting a 25-foot buffer around ponds and wetlands, which are unprotected after a court ruled that wetlands aren’t protected if they lack “wrested vegetation” (which most do lack), reversing an earlier decision that all wetlands are protected as state waters.

Girtz announced a potential compromise at the Tuesday, July 22 agenda-setting meeting. He wants to allow buffer widths to be flexible, at least 25 feet but up to 75 feet if buildings can be moved that far from the water. Stream buffers could be reduced to 50 feet in spots, as long as they average 75 feet and the buffers are forested to provide additional protection.

Denson and Hamby attacked the proposal on a number of levels: there will be hidden costs; it won’t do enough good to be worthwhile; it will take up too much staff time; the commission should abide by the committee recommendation.

Proponents countered that Girtz’s buffer proposal would protect more than 400 acres of wetlands and 700 acres of ponds, which are vital to clean water and healthy ecosystems; it won’t cost property owners a dime beyond the cost of a few trees; that commissioners set staff’s priorities; and that it’s the commission’s job to set policy, not an appointed committee.

The vote won’t be final. Commissioners will be voting on instructing staff to write regulations they’d have to approve again.