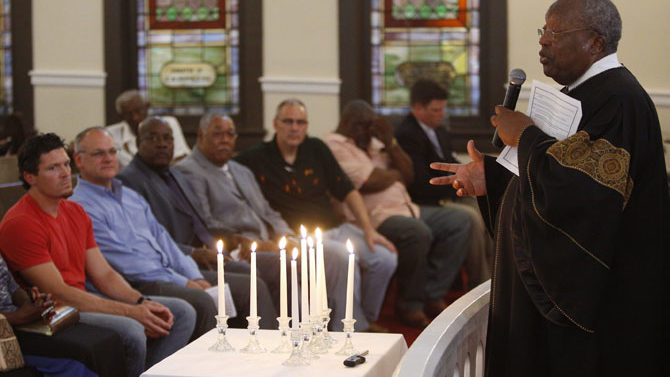 If you had asked me 10 years ago whether same-sex marriage would have become legal in Georgia and the Confederate flag would be pulled down all over the South in the same week, I would have laughed in your face.

That’s because I covered the debate over the Mississippi state flag in 2001, when 64 percent of voters (read: almost every white person in the state) chose to keep the Confederate-themed design. I moved to Georgia in time for the aftermath of Gov. Roy Barnes’ minimizing the St. Andrew’s Cross on Georgia’s flag, which ultimately cost him re-election. One of my first assignments was covering a Confederate Memorial Day event, interviewing the “Sonny lied!” contingent about Gov. Perdue backing out of his promise to put the flag up for a vote. And I was here when Republicans used a constitutional gay-marriage ban to divide and conquer Democrats, completing their takeover of state government. A now-inconceivable 76 percent of voters wanted to keep same-sex couples from marrying in 2004.

That ban is no more. The Supreme Court struck down the 14 remaining same-sex marriage bans, including Georgia’s, last Friday. “Advocates for marriage equality won on all the big questions in the case,” University of Georgia law professor Hillel Levin said.

Just a few hours after the decision was handed down, Judge Susan Tate was officiating the wedding ceremony of Jordyn Dolente and Moriah Martin—the first of many couples who lined up for their marriage licenses that day. “It feels like we’re finally citizens,” said Joy Carrell, who unofficially married her partner Lisa Brown at a Unitarian Universalist Fellowship partnership three years ago but made it official June 26. “We finally have the rights of the citizens of the United States.” (Look for more coverage of this late-breaking, historic ruling in next week’s issue.)

At the same time, for the first time, Southern politicians are running from the Confederate flag like the Yankees breaking at Bull Run. For instance, Gov. Nathan Deal last week defended Confederate license plates; his advisors must have passed out on the fainting couch, because he reversed himself less than an hour later.

This came to pass because of a tragedy: Dylann Roof, a 21-year-old white supremacist, walked into Mother Emanuel African Methodist Episcopal Church in Charleston, SC, sat in on a prayer meeting for an hour, then shot nine black worshippers to death.

In the aftermath of the shooting, Athens First AME invited churchgoers white and black to a memorial service for the victims on June 24, where the Rev. Claude Ray James, First AME’s pastor, and pastors from at least a dozen other local churches prayed for healing and an end to racism.

“We pray for the people who are consistently and constantly pumping hatred into the hearts of the youth,” James said. “We’ve got to stop teaching hate. There is no way a 21-year-old can feel that much hate unless somebody taught him.”

No longer is our government teaching Americans that gays and lesbians are second-class citizens, or that a heritage of segregation and brutality against African Americans is something to be proud of. It won’t end hatred, but it’s a start. And when you factor in King v. Burwell finally enshrining Obamacare, maybe we can all move on. [Carolyn Crist and Benjamin Tankersley contributed reporting.]

Terrapin Stay-tion: The Athens Banner-Herald’s Jim Thompson had a nice scoop last week, learning that Terrapin Beer Co. had sought out offers to move its Newton Bridge Road brewery out of state. According to documents obtained by the ABH, Terrapin co-founder and President John Cochran leveraged lucrative incentive offers from South Carolina and at least one other suitor into a tentative deal with Athens-Clarke County to spend $1.7 million on land for an expansion that would be leased back to the company at a steep discount.

The Internet disapproved, but it’s hard to blame Terrapin for gaming the system (business is business, after all). And maybe giving the company a little boost will pay off in the long run—we don’t know, because neither Cochran nor ACC officials are talking.

However, the secretive negotiations were yet another reminder that, in the economic development world, governments can legally bribe companies, and companies can legally blackmail governments. Tax incentives used to be reserved for the biggest deals like Caterpillar, which could have built its Athens plant anywhere in the Western hemisphere with access to a port. Lately, though, ACC seems eager to give money away even to grocery stores and hotels—businesses that have no choice but to be in Athens. If corporate welfare is how we define being business-friendly, we need to rethink our strategy.

This should also serve notice to state legislators that they ought to revisit allowing breweries to sell beer directly to the public. South Carolina liberalized its beer laws last year in an effort to lure Stone, a popular and respected California craft brewer. Stone opted to build a second brewery in Virginia, instead. Combine that failure with South Carolina and Georgia’s rivalry (see: Volvo), and our neighbors to the east are bound to try to pick off another one.

A Pat on the Back: Pat Allen, one of ACC’s founding fathers and UGA’s diplomat to Athens, retired on June 30.

Allen chaired the committee that wrote the charter when the city and county unified 25 years ago. A banker by trade, in 2003 he took the newly created position of UGA director of community relations.

“The university needed someone to wake up every morning and ask, ‘How will what we are going to do today at the University of Georgia impact folks in the community?'” Allen told Columns, the UGA newsletter.

While not perfect, town-gown relations have improved markedly during my 10 years in Athens, and Allen deserves quite a bit of credit for that.