A Student Housing Developer Might Buy the Bottleworks Parking Lot 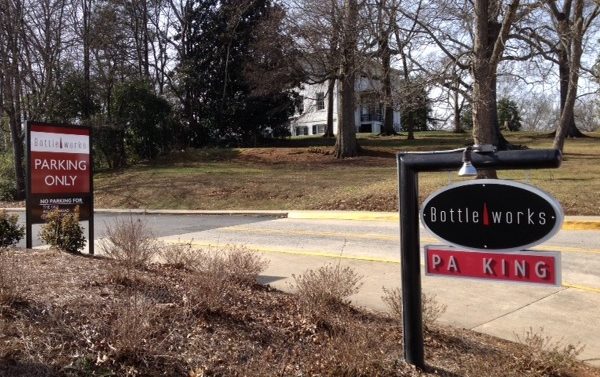 Another student apartment building could be coming to downtown—this one on the hipper, less student-y west side.

Atlanta-based Parkside Partners, which owns Bottleworks, is in talks to sell the development’s parking lot off Meigs Street to Landmark Properties, an Athens-based student housing developer that built (and recently sold) The Standard at the corner of Thomas Street and North Avenue, and is about to start construction on The Mark at the old Armstrong & Dobbs property.

“We have not purchased the property, so I cannot comment at this time,” Landmark CEO Wes Rogers said last week.

Parkside partner Douglas James said he will share more “once we get to a spot where we think we have a plan that works for the new development and, most importantly, the parking for our tenants at Bottleworks.”

Parkside—which has renovated and revitalized Bottleworks since buying it in 2013, drawing praise from tenants and neighborhood residents—is not selling its interest in the development, James said.

The 1.2-acre parking lot is zoned commercial-downtown. While it’s unknown what Landmark has in mind, the downtown Athens master plan calls for the lot to be redeveloped with townhouses with parking underneath and a small three- to five-story apartment building at the corner of Hancock Avenue and Newton Street. However, the Athens-Clarke County zoning code allows for something much bigger—100 feet tall, with up to 240 bedrooms.

ACC Commissioner Kelly Girtz said he wouldn’t be surprised if the parking lot is redeveloped. The success of Bottleworks (which has drawn a distinctly grown-up clientele) shows that mixed-use developments don’t always have to be student-oriented. “It demonstrates to me that there are amenities around here that appeal to more than students,” Girtz said.

Surface parking lots are terribly wasteful use of valuable downtown land, especially in a city like Athens that needs to get denser if we want amenities like better transit and a grocery store, so redeveloping this lot could be a great thing—if it blends in with the neighborhood. If it winds up being The Standard West, though, it’d be the first such complex west of the imaginary Berlin Wall along Lumpkin Street that traditionally has separated the frat bros and be-Ugg-ed young ladies from those weird hipsters. It shouldn’t be a surprise, since everything east of Finley Street between Prince and Broad has been zoned commercial-downtown since at least 1999, and Cobbhamites have had students (and apartments) in their midst for far longer. But it’s certainly an indication that the downtown development boom, which mainly has been confined to the eastern edge of downtown, is spreading. The Camak House next door to the Bottleworks lot, currently a law office, has been on the market for years. Could it be next?

Meanwhile, on Prince: Half Moon Outfitters has submitted plans for interior renovations to the old New Way Cleaners building it’s moving into later this year. And it looks like the plans for a building on the vacant lot in Normaltown where Allen’s used to be are moving forward as a medical office, not student apartments, even though the lot was purchased by the Polo Club of Athens. The company, helmed by Athens student housing magnate John Barrett, also owns a medical office park off Hawthorne Avenue. They recently resubmitted plans that are identical to those filed in 2012 that were set to expire, according to ACC Planning Director Brad Griffin. Those plans call for a three-story building with a parking deck underneath.

“What happened on Atlanta Highway didn’t happen overnight,” he said. “In a way, it’s like what’s happening with the apartments downtown—everybody’s moving to the newer thing.”

Hamby said his group has already sown wildflower seeds in the medians—”Just make it look a little better out there”—and is working with a newly formed association of business owners, too. And in next year’s budget, he and other commissioners hope to fund a small-business coordinator in the city’s Economic Development Department who could work with strip-mall owners to fill vacant spaces with locally owned businesses.

Transportation Funding: In the long term, Hamby continues to advocate for a 1 percent sales tax for transportation, which would raise $20 million a year for road improvements and transit. Such a tax that passed in Athens in 2012 failed because Clarke was arbitrarily grouped in a region with 11 other counties that all rejected it. Hamby would like the legislature to allow Athens-Clarke County to go it alone or choose which other counties to partner with (for example, Oconee, Barrow and Gwinnett to fix Highway 316).

However, the transportation bill state House leaders introduced last week almost does the opposite. It essentially robs Nancy to pay Nathan by appropriating local sales taxes on fuel for state use, putting county commissioners, city councilmen and school board members in a position where they—not state legislators—are the ones who increase taxes to make up the difference.

According to the Georgia Municipal Association, the bill would cost local governments and schools more than $550 million per year, including $5.1 million in Clarke County.

And while T-SPLOST would have pumped $40 million over 10 years into Athens Transit, the House bill does little for rail or buses, in spite of recent Republican lip service. Because the sales tax on fuel would be converted into an excise tax, due to an archaic state law, it could only be spent on roads and bridges. Just a $200–300 annual fee on alternative-fuel vehicle owners (who don’t currently pay gas taxes) would be devoted to transit.

Sunday Buses: Athens for Everyone, the progressive group that grew out of Tim Denson’s mayoral campaign, is making a push for Sunday bus service as part of ACC’s fiscal 2016 budget. (Look for more from Tim on this topic in an upcoming issue.) Athens Transit Director Butch McDuffie said he has requested funding for Sunday service, but he emphasized that it has not been approved by Manager Alan Reddish or Mayor Nancy Denson for inclusion in the mayor’s proposed budget, let alone by the commission. “It has a very long way to go before it becomes anything,” McDuffie said.