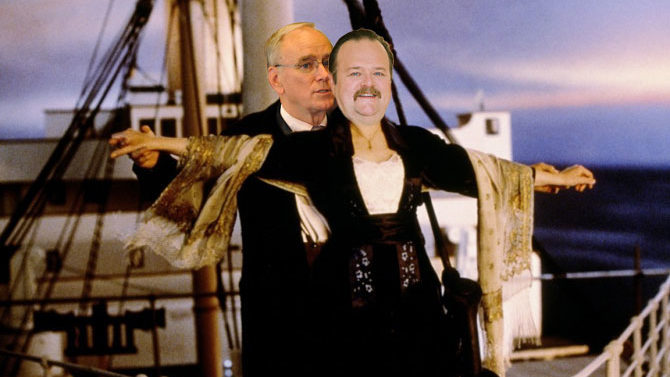 At the end of a committee meeting last month, Doug Lowry started reminiscing. The commissioner, ousted by Sharyn Dickerson in the May elections, famously feuded with Athens-Clarke County Manager Alan Reddish during his two terms, at one point even threatening to get Reddish fired. He joked that, before leaving office, they’d sing a duet of the Titanic theme song.

Lowry was one of the first people I met when I moved to Athens in 2005 to take over the government beat for the Athens Banner-Herald. He wouldn’t run until District 1 Commissioner Charles Carter retired the following year, but he still never missed a meeting. Often, Lowry and I would be the only people in the audience for a meeting, so we got to know each other pretty well.

“He really wanted to know what this job entails,” Commissioner Harry Sims said.

In spite of his cantankerousness behind the rail—if there was a 9–1 vote, Lowry was usually the one—he’s a nice, funny guy in person, and no one worked harder.

“Doug always tells it like it is,” Commissioner Jerry NeSmith said. “If I want to know an opinion that I’ll probably disagree with, I can get it from Doug.”

Lowry and commissioners Kathy Hoard and George Maxwell, who both declined to run for re-election, said their goodbyes at the commission’s Dec. 2 voting meeting. “I’ll miss it, sure enough, but I won’t lose any sleep over it,” Maxwell said.

Maxwell will be replaced by Melissa Link, who will bring fire and passion to a group that needs a shot in the arm. But while Link has her own pros and cons, no one could replace Maxwell’s moral authority. He was one of Athens’ first black police officers, a postman and a preacher, and because he is so soft-spoken, when he speaks up, everyone listens. He fought to make sure his low-income African American constituents (who are too often merely paid lip service by our city leaders) were heard, and if he felt that they were being forgotten, he’d be “deeply disturbed”—which became something of a catchphrase.

“I remember being scared to speak [as a newbie commissioner] when Commissioner Maxwell got disturbed about something,” Commissioner Mike Hamby joked.

One thing I always admired about Hoard was that she never forgot those people, either. She once represented Rocksprings on the old city council, before unification, and even though she now represents affluent Five Points, she worked closely with Maxwell on issues relating to his neighboring district. Her pet issues, though, were animal rights and historic preservation. (You can thank her for protecting the majestic houses along Milledge Avenue, among other things.)

Hoard was “truly the bellwether of this body,” Commissioner Kelly Girtz said, and he’s right. She was the swing vote on so many issues. If you could convince Hoard, you were going to win. And don’t let her blonde ‘do and genteel demeanor fool you—Hoard had the sharpest wit on the commission. Look up “bless your heart” in the dictionary, and there’s her picture. That’s what I might miss most of all.

In January, Diane Bell will take Hoard’s place, joining Dickerson and Link behind the rail. Whether the turnover will jolt our moribund commission into action on the big issues facing our community, we’ll have to wait and see.

What They Did: There was some business to take care of last Tuesday, too. Girtz won approval for Mayor Nancy Denson to appoint a committee to recommend development buffers around wetlands for an August vote. Denson insisted that the committee consider whether jobs would be lost as a result, leading NeSmith to question whether Denson would stack the deck to kill stricter environmental protections, which she denied.

Another committee, chaired by Sims, will be appointed to tackle the specter of increased gang affiliation among our youth.

The Athens Downtown Development Authority’s plan to limit the hours when delivery trucks can park in the middle of Clayton Street also passed, as did continuous trash and recycling pickup in the downtown area, starting in January.

In addition, you can now sample draft beer before buying a growler.

Use of Force: Prompted by the Eric Garner case in New York, Oconee County Sheriff Scott Berry recently posted a screed on Facebook about how dumb it is to resist arrest (duh). Amidst a stream of white folks reacting with sickening glee to the news that no indictment would be handed down in Garner’s death at the hands of an NYPD officer, I asked Berry whether the banned chokehold that a medical examiner ruled killed Garner is legal or approved in Oconee County. He didn’t really give me a straight answer. Chief Deputy Lee Weems argued that it wasn’t really a chokehold because Garner could say, “I can’t breathe.” Berry drew a distinction between choking and “positional asphyxia” (the pressure on the chest and neck that killed Garner), as well as noting that Garner had other health problems.

ACCPD Assistant Chief Fred Stephens was much more direct. “We don’t do it,” he said. “It is not acceptable in this department and has not been for years.”

Stephens, a 36-year veteran of the Georgia Bureau of Investigations, said he joined ACCPD because of its reputation for professionalism under former Chief Jack Lumpkin. He acknowledged that officers sometimes err because they have to make split-second decisions, but he said they are trained to treat citizens as partners. “We try our very best to remove any kind of bias,” he said. “What we do is fact-based and behavior-based.”