Our State Legislators Won’t Do Anything for Us 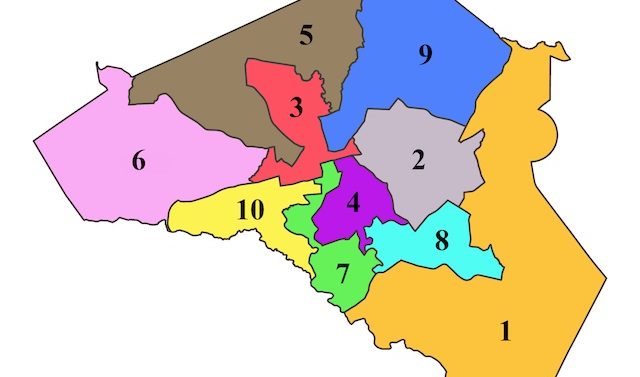 This bears repeating. In 2012, Republican lawmakers and African Americans joined forces to pass a new Athens-Clarke County Commission district map over the objections of the commissioners themselves, who wanted to keep their districts roughly the same.

This new map was, according to its supporters, supposed to increase minority representation on the commission while also making Republicans competitive in at least a couple of districts. Instead, there are still no conservatives on the officially nonpartisan board, and after Melissa Link’s election to the retiring George Maxwell’s seat, the commission will include only one African American out of 10 in a community that is nearly 30 percent black.

“I would hate to be on a commission that doesn’t have appropriate minority representation on it,” Commissioner Jared Bailey said at a work session last week. “That’s why we need to revisit the maps.”

Don’t count on it happening when the legislature convenes in January, though. And don’t expect much cooperation from our local delegation on many other issues.

In their annual meeting with commissioners, our Republican state lawmakers (the lone Democrat, Spencer Frye, didn’t attend) showed little interest in any of the Mayor and Commission’s formal requests for 2015 legislation. For the third year in a row, they have no interest in revisiting commission districts. They say they can’t move local ACC races from May to November, when many more people vote, because there’s too much “resistance.”

Nor will they do anything to slow down traffic on our residential streets. They won’t let police run radar to catch speeders. They won’t even tweak a law regarding pedestrian crosswalks. According to Commissioner Kelly Girtz, pedestrians who are crossing at a crosswalk without a signal only have the right-of-way once they step into the road—a Catch-22 if there ever was one. He’d like to require cars to stop for pedestrians who are standing on the curb, not in the middle of the road. “I don’t have any interest in… making a driver read someone’s mind,” said state Rep. Regina Quick. [Blake Aued and David Schick]

Too Hot: As anyone who’s attended the Flagpole Athens Music Awards can attest, the Morton Theatre gets awfully sweaty. The good news is that ACC is installing a new HVAC system that will make it more hospitable to the warm-blooded among us. The bad news is the HVAC is $750,000 over budget, because the county only got one bid, and installing it will be more complicated than anyone thought it would be.

It just so happens, however, that ACC has a $10.5 million contingency fund for the jail expansion that it’s not going to spend, because that massive undertaking came in way under budget. And so not only will the commission be able to fund the Morton Theatre improvements with those SPLOST dollars, but they’ll be able to spread them around for other goodies, as well.

Give Thanks: Burn some calories before putting your turkey in the oven. For a second year, the Give Thanks 8K will encourage families to run in Athens’ only Thanksgiving race. All funds will go to three children’s charities—Chess and Community, Health Matters Camp and Awesome Clubhouse.

“So many people sit around and eat all day, and we want to engage children and families in physical activity on Thanksgiving,” said Dani McCall, owner of Total Training Center/Chase Street Yoga.

McCall asked 20 local business owners to help her create the race last year after training runners for the Atlanta Half Marathon for 14 years. They realized they’d rather stay in town and support local nonprofit groups. Last year, they expected 150 runners and 275 showed up, which raised about $6,000 for Athens Community Council on Aging’s Meals on Wheels program. This year, the group anticipates 400 runners.

Registration begins at 8 a.m. at the Bottleworks, and the race will start at Hendershot’s at 9 a.m. The kids’ fun run starts at 10:30 a.m. The five-mile course loops around the Boulevard and Cobbham historic neighborhoods and ends at Hendershot’s. Registration is $30 per person, $90 for families of three or more, and free for children. Prizes will go to the overall male and female runners and top three in each age group. “Get out and get some exercise with your family on Thanksgiving,” McCall said. “We want to make this an Athens annual tradition.” [Carolyn Crist]

Chess and Community: The nonprofit, which aims to checkmate poverty amongst young people in Athens, also is raising money to send a group of underprivileged kids to a chess tournament in Washington, D.C. They’re having a fundraiser Friday, Nov. 21 from 4–9 p.m. at Little Italy, or find their IndieGoGo campaign through chessandcommunity.org.

In Your Business: A bunch of retailers are playing musical chairs downtown, per former Banner-Herald business editor Don Nelson’s Facebook page. (He still keeps up.) Urban Outfitters is opening up where The Red Zone, a Bulldogs memorabilia store, used to be, so The Red Zone is moving across West Clayton Street to where Encore is located now. Encore, a women’s apparel shop, is moving into the former Momma Goldberg’s Deli location in the West Washington Street parking deck. The owners of The Red Zone, meanwhile, have opened a gift shop called I Love Athens in the former Lee’s Wigs Shop storefront. (Lee’s Wigs moved next door to Firehouse Package on West Broad Street earlier this year.)

In other downtown business news, restaurateur Keith Rabideau, best known as proprietor of Copper Creek, is opening a liquor store called Spirits on Washington at 318 E. Washington St., according to the ACC Planning Department. And Junkman’s Daughter’s Brother has been reborn as Tinfish Gifts under a former manager, across East Clayton Street from the original. Meanwhile, as promised, Junkman’s has temporarily reopened as a pop-up store near Last Resort on Clayton Street for the holiday shopping season.

Creature Comforts is staying put but, a mere seven months after opening, is already planning an expansion. The brewery launched its can line last week, packaging its Athena berliner weiss and Tropicalia IPA for retail sale, and Reclaimed Rye and Bibo, a pilsner, will follow suit in January and March, respectively.

In February, Creature Comforts will double its production to 8,000 barrels per year, CEO Chris Herron said, allowing it to expand can distribution beyond Athens into Atlanta. Further expansions could increase capacity to 15,000 and then 22,000–25,000 barrels, although at that point the company would probably seek a second facility in addition to the rehabbed Snow Tire building on West Hancock Avenue, he said.

Craft Beer: Creature Comforts has also hired a lobbyist to convince state legislators to change Georgia’s restrictive laws regulating the beer industry. Currently, when you take a tour at Creature Comforts or Terrapin, you’re paying for a souvenir glass, but the samples are free. Breweries are prohibited from selling their products directly to the public. Consumers who visit the brewery ought to be able to take a six-pack home with them, Herron said.

These efforts have been brewing for some time, but next year may be the year when the legislature finally acts. “There will be some tweaks, I think, to the craft beer regulations that exist,” said state Rep. Regina Quick.

Boulevard Woods: Backers of the community-built pocket park on Athens-Clarke County-owned land on Barber Street have met their fundraising goal, raising $102,126 as of Nov. 14, according to former Boulevard Neighborhood Association president Dan Lorentz. That’s in addition to a $75,000 grant the group received in 2012. Donations are still being accepted at boulevardwoods.org and will be put toward future phases of the park.