Why the Republicans Won Big Again 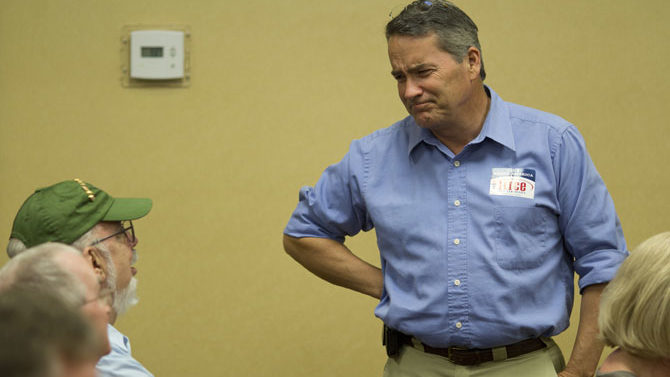 Leading up to Nov. 4, local Democrats were optimistic. Some even thought that Jason Carter would win the governorship without a runoff. I predicted that Carter and Michelle Nunn would push Gov. Nathan Deal and David Perdue into runoffs before losing.

Shifting demographics were supposed to make Democrats more competitive. The party was going to register hundreds of thousands of new voters and work to turn out those who usually only cast ballots in presidential elections. Polls showed Nunn with a slight lead and Carter within striking distance. Almost one million voted early, and 33 percent of them were African American—a figure that would put Carter and Nunn over the top, if it held up on Election Day.

And then Lucy pulled the football away again.

Hardly anyone even considered the notion that white people could get any more Republican, but somehow, they did. Exit polls showed that just 23 percent of white voters supported Carter and Nunn, down from 26 percent voting Democratic in 2010. Only 29 percent of voters were African American—less than what Democrats needed and only one point higher than four years ago. And Deal won 10 percent of the African American vote—twice what Republicans usually get—perhaps due to television ads touting the criminal justice reform measures he’s pushed through.

As it turns out, you can’t run an Obama-style campaign without Obama. Not only did Democrats do less well than they expected among women and African Americans and lose ground among white men (just 19 percent voted for them), but the youth vote failed to materialize as well. Voters age 18–29 made up only 10 percent of the electorate, barely half the share they made up in 2012. Overall turnout was 2.6 million, or 50 percent—almost identical to 2010, in fact slightly less.

There are hardly any truly independent or persuadable voters left out there. Almost all of what few undecided voters there were broke for the Republicans. Going down the ballot, almost every Republican incumbent won 58 percent, 58 percent, 58 percent. Only about six percent of voters who supported Carter did not vote for Nunn and vice versa, according to the exit polls. Same goes for Deal and Perdue. We are getting more partisan: Georgians used to split their tickets, but this year, as in 2010, almost everyone voted straight party line.

So you can forget about turning Georgia purple in 2016. Unless a Democrat is elected governor in four years, you can forget about being competitive in legislative and congressional races until 2032, either, because Republicans will once again completely control the redistricting process. And don’t forget, the Supreme Court struck down the Voting Rights Act, which used to ensure minority representation. Say goodbye to our lone remaining Democratic House district. How many ways will Republicans slice and dice Athens next time?

The Hiceman Cometh: Speaking of slicing and dicing districts, I was shocked at how many people were shocked that the walking “Daily Show” segment known as Jody Hice won the 10th Congressional District race. Of course he won. Any Republican would be a lock to trounce any Democrat by 30 points or more. You could’ve written the results down in ink months ago. It did not help, however, that Democrat Ken Dious ran a lackluster campaign (and I use the word “campaign” generously).

Some have blamed Hice’s victory on gerrymandering, which is not true. The 10th is not gerrymandered in the least. It just so happens that Athens does not have enough Democrats to overcome the legions of Republicans who live in surrounding counties. And as I mentioned earlier, most Republicans vote for Republicans no matter what, just as most Democrats are not going to vote for a Republican if they deem the Democratic candidate to be too liberal.

The only way for Athens to elect a Democrat to Congress is to draw a pterodactyl-shaped district that connects Athens, Augusta and Savannah, which is what Democrats did in 2002, when they were still in power. Now that was gerrymandering. Republicans redrew the 12th District twice in an effort to unseat U.S. Rep. John Barrow, first removing his hometown of Athens, forcing him to move to Savannah, and then taking Savannah away, too. It finally worked this year—Barrow lost to Republican Rick Allen, and now there are zero white Democrats from the Deep South in Congress.

Looking Ahead: As attractive a candidate as Carter is, I’m not sure he did well enough to warrant a second shot at the governor’s mansion. If he runs, and most insiders expect him to, Atlanta Mayor Kasim Reed has to be considered the frontrunner for the nomination. Reed angered many Democrats by refusing to lift a finger to help Carter, sparking a feud with party chairman Dubose Porter, so this could get ugly. (Of course, it made no difference in the end, as Reed worked hard for Nunn, and her results were the same as Carter’s.) If Barrow gets the itch, he could be a factor, too.

On the Republican side, Secretary of State (and Athenian) Brian Kemp has positioned himself well for a promotion, drawing applause from the GOP base for fighting to keep voters registered by Democrats off the rolls. Conservative activists are mad at Attorney General Sam Olens for defending a citizen journalist who was forcibly removed from a campaign rally for videotaping it, which could hinder his chances. Lieutenant Governor Casey Cagle spent $2.6 million running upbeat ads in order to get… exactly the same number of votes as the other Republican incumbents, which does not bode well for him.

Johnny Isakson is unbeatable, so let’s not even bother talking about the 2016 Senate race.