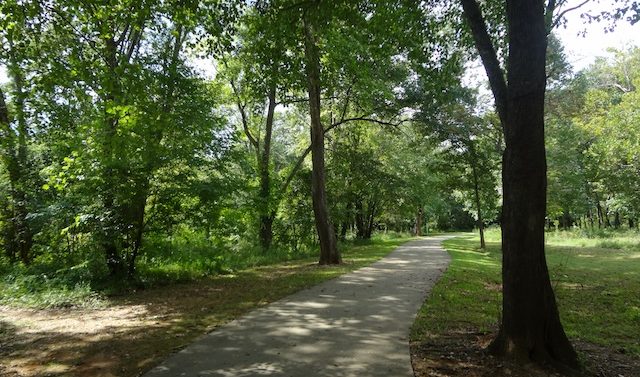 Longstanding plans would eventually extend the present North Oconee River Greenway in both directions, build the so-called Firefly Trail to Winterville, and begin construction of a new greenway trail along the Middle Oconee River centered on Ben Burton Park. Athens-Clarke Commissioners will be asked to approve a concept map for the new trails on Oct. 7, along with shorter connections to other planned and existing trails.

No exact routes have been planned yet for any of the new trails—that could take years, county Manager Alan Reddish told commissioners last week at a work session. “There are a lot of moving parts” in planning and building such trails:  negotiating with property owners along the routes, which include not only homeowners but also UGA, the federal government and a cemetery, he said. While local government has the legal authority to force private property owners to sell their land for a public use, it has never exercised that authority to build trails, preferring instead to negotiate voluntary agreements. Sometimes this has meant departing from a preferred route.

Reddish said some of the new trails might be finished by the time current sales-tax collections run out in 2020; others will likely need additional funding, perhaps from a future SPLOST. If commissioners approve the concept plans, “this is when you really start to get into where on the ground the trail is going to go,” Leisure Services park planner Kevan Williams said.

But several homeowners in the River Oaks subdivision off College Station and Riverbend Road appear to be panicked by the prospect of the North Oconee Greenway being extended through their subdivision. (Presently, the trail ends near Oconee Street, but would be extended south along the river to the State Botanical Garden.) A homeowner who phoned Commissioner Kathy Hoard “was virtually in tears,” Hoard said, because he thought the trail would take 10 feet of his front yard. That was news to Reddish, who said no such specifics had been decided. “We’re nowhere near that kind of discussion,” he said. “That’s somewhere way out in the future.”

Hoard suggested removing that section of the trail from the concept map. Mayor Nancy Denson agreed, saying that River Oaks residents had “expressed displeasure” with trail plans as far back as 1988, and she wanted a plan the whole community could buy into. Reddish agreed to come up with alternatives for the commission to choose from at their next voting meeting, but noted that commissioners had already approved the general plans 10 years before and warned that changing the route might be expensive. “It’s certainly the most direct route,” he said.

No public input was taken at last week’s work session, but seven public hearings have been held on the greenway plans in the past two years, Williams told the commissioners. “We really tried to get this map out into the community,” he said. He told Flagpole that he was aware of the concerns of some residents, and that an informational meeting was held in the River Oaks subdivision last month for that reason; sentiments had run from support to opposition. The proposed route was originally suggested by a River Oaks resident, he added.

The greenway concept map that commissioners will be asked to approve is on the county’s website. It shows 14 miles of “high priority” new trails:

• extending the present greenway north along the river to Newton Bridge Road, as well as south to the State Botanical Garden.

• building the Firefly Trail along former railroad tracks to Winterville.

• building the first phase of the proposed Middle Oconee River Greenway, which would extend along that branch of the river in both directions from Ben Burton Park (north to the train trestle and south to historic bridge abutments on the river).

• a side trail to the county’s historic 80-acre Beech Haven property off Atlanta Highway.