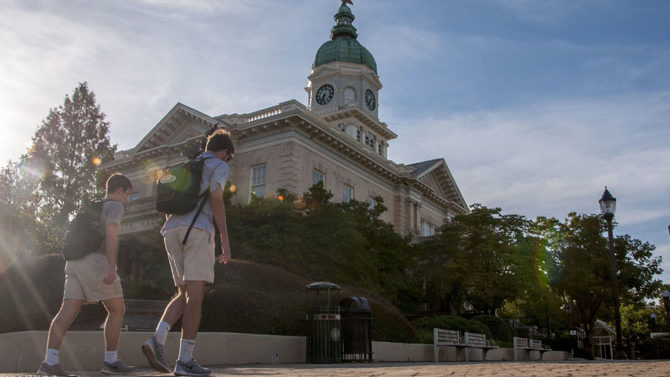 When it comes to downtown development, we’re all kinda like that Insane Clown Posse song where they think magnets are magic or whatever. “Student housing—why do they keep building it?” ¯(°_o)/¯

Here to explain is Athens-Clarke County Senior Planner Bruce Lonnee, who gave a typically candid and cogent talk on the topic last week at the Athens Area Chamber of Commerce.

First, Lonnee gave an overview of some of the major projects recently completed, currently underway or coming down the pike—The Standard, Georgia Heights, the Selig/Landmark apartment complex at Armstrong & Dobbs—as well as the Classic Center expansion and the West Washington parking deck, which apparently a bunch of state planners oohed and aahed over on a tour the other day. (Blog post idea: Athens Parking Decks, Ranked.)

“We’ve had at least one crane over downtown since 2000,” Lonnee said. “In spite of the downturn, downtown is alive and well, and that’s put pressure on our design standards.” Said design standards were put into place around 2006, basically because people thought the then-new Gameday building was ugly.

Our relatively strict downtown code does keep out developers who are only interested in a quick cash grab. The ones who want to do it right are willing to go through the process, Lonnee said. He cited The Standard (at Thomas Street and North Avenue) as an example of sustainability. “That building was built very, very well,” he said. “It could have many lives.”

The code isn’t squelching development, either, Lonnee said, pointing to Georgia Heights (at Broad and Lumpkin streets) which is owned by a Chicago-based company. “We didn’t have to seek those folks out,” he said. “They came to us. Nationally, Athens is very much on the radar.”

All the development is a fulfillment of a comprehensive plan created with massive community input. The future growth plan’s overarching purpose is to limit sprawl and encourage dense development downtown by allowing up to 200 bedrooms per acre. Assuming government-owned properties and buildings in the downtown historic district aren’t redeveloped, the infrastructure is sufficient to support that level of density, Lonnee said. Now that the plan is coming to fruition, though, “folks are legitimately asking, ‘Have we gone too far?'” he said.

One advantage of thousands of students moving downtown is that the area can finally support a grocery store. “Whenever we talk to grocers, they don’t want to come in unless there are people,” Lonnee said. “Well, now we have people, and we’re talking to not one, but several grocery stores about coming in.”

But why is everything marketed to students? What about retirees? After all, Athens is consistently ranked among the best places to retire, and Lonnee said the planning department receives “dozens” of calls from retirees looking to move here. But they’re mainly buying houses in subdivisions, he said.

Lonnee said he thinks a senior-oriented development makes sense downtown. “You’ve got to have a developer who’s willing to do that,” he said. “The cash grab is much faster with the student market…. We have some older, moneyed Athenians who really, really want to live downtown but are having a hard time finding something that works for them.”

St. Joseph’s Catholic Church, which is in the process of moving to a new campus on Epps Bridge Road, would be a perfect spot, Lonnee said. He raised the possibility of overlay zoning or incentives because of community interest in how that property will be redeveloped, but the Atlanta archdiocese isn’t interested in anything that would hamper its ability to sell it, he said. Nor is the archdiocese in any hurry to sell, and no one has inquired about the property in several years, he said.

Another area of concern is the block surrounding City Hall, where SPLOST-funded plans for a public gathering space have lain dormant for years. Professor Jack Crowley has called for a park and an infill building in the parking lot there in the downtown master plan he recently completed. “I promise you, something will be done with that mall in the next year or two,” Lonnee said.