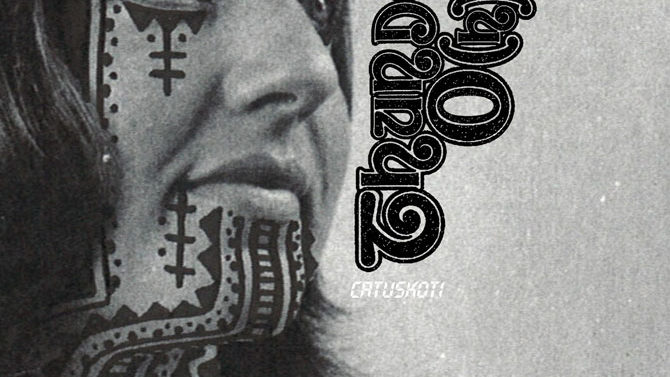 Recorded live to tape in one sitting with no studio edits, the debut recording from avant-jazz outfit Thunder O(h)m is challenging but invigorating, a reminder that “free” music can be—dare I say it?—fun. The album’s first four tracks—”True and True Only,” “False and False Only,” “True and False,” “Not True and Not False,” to give you an idea of what we’re working with—find the trio putting an upbeat cosmic spin on earthly chaos.

On these songs, pianist Brad Bassler’s sparse chordal stabs and drummer John Norris’ ceaseless playing lead the way while Athens music fixture Killick Hinds goes ham on his Vo-96 acoustic synthesizer—which, if you’re not familiar, look it up and prepare to be wowed.

Mostly, Hinds uses the instrument—basically, a fretless acoustic guitar outfitted with a harmonic-manipulating synthesizer—as a source of meditative, copper-colored drone, allowing Bassler and Norris to carry the rhythmic load. But on “True and False,” he plays it like a bassist would an upright, finding the groove and locking decisively in alongside his bandmates. It’s an unexpected but highly welcome moment.

Fifteen-minute closer “Four Corners” is the oddball on a record of tight, four-minute truth bombs, and though it contains a few transcendental passages, it suffers for its superfluity. But that doesn’t change the fact that Catuskoti is one of the most exciting efforts to emerge from Athens’ thriving experimental scene this year.

Athens Power Rankings for the Week of Sept. 8