Gov. Nathan Deal Steps In It on Undocumented Student Question 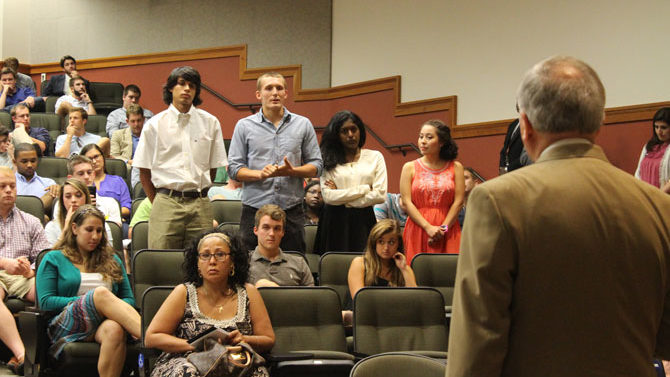 What should have been an opportunity for Gov. Nathan Deal to get a little positive press and recruit some college students to volunteer for his re-election campaign turned into a major headache for the governor just minutes after Carver Goodhue rose from his seat.

Deal had started his day in Athens Tuesday, Aug. 26 participating in a groundbreaking ceremony for the University of Georgia’s new science learning center. After a visit to Bulldogs football practice, he capped it off with a speech to the College Republicans.

Deal gave a version of his stump speech emphasizing job creation—adding a little twist by telling students he’s trying to keep them from having to move back in with their parents—and took a few milquetoast, pre-screened questions. Goodhue got in the last one, about the Board of Regents’ policy prohibiting undocumented immigrants from enrolling at UGA. That’s when everything started going sideways.

“…[W]hy do you deprive undocumented immigrants who’ve lived here all their lives the right to come here and attend school with us?” Goodhue, standing shoulder to shoulder with three other UGA students, asked Deal.

“It is really something that can only be dealt with by the federal government at the congressional level, dealing with DREAM Act children, which I presume that maybe you are,” Deal replied. Wait, what? The DREAM Act involves a path to citizenship for undocumented young people. Why would deal presume, at a student gathering on a campus where undocumented students are banned, that these four young people (one white, three darker-skinned) are undocumented?

“I’m not an illegal immigrant,” Lizbeth Miranda interjected. “I’m not undocumented I don’t know why you thought I was undocumented. Is it because I look Hispanic?”

Everybody’s ears perked up. The crowd booed and moaned.

“You made the statement,” Deal responded. “You stood up, so I apologize. I apologize if I insulted you. I did not intend to.”

I tweeted out an abbreviated version of this exchange, then posted an account at In the Loop, and Twitter’s journo-political industrial complex went nuts. The reaction went from disbelief to forehead slapping to spin in a matter of a couple of hours.

First, Deal spokesman Bryan Robinson disputed that Deal had been speaking to Miranda; saying he had presumed Goodhue was undocumented (which made very little sense, since he also said it to the guy next to Goodhue, Kevin Ruiz). Then, Robinson urged the students to turn down their outrage. “A member of Undocumented Student Alliance is offended someone might presume she’s in the DREAM Act category? Really?” he tweeted.

Bryan Thomas, the spokesman for Democrat Jason Carter’s gubernatorial campaign, went the sarcasm route, too: “How could someone possibly be insulted by being told by the GOVERNOR that they’re presumably undocumented?”

The next round of spin was along the lines of “nothing to see here, move along.” The following day, CBS 46 in Atlanta (one of several stations to pick up our scoop) quoted UGACR Political Director Grant Thomas: “They were very confrontational. They stood up. We had pre-screened questions, and we had told everyone that beforehand. They didn’t follow those guidelines. The governor, he was very calm, collected and polite in his response, so I think the whole thing was blown out of proportion.”

Well, they were all civil. Confrontational? No. These students went to a public event and asked the governor a question about a very important issue, which they have every right to do. Deal, to his credit, didn’t dodge it, although for a former congressman to blame Congress for a policy put into place on the state level is disingenuous in so many ways.

That drew more snark from Carter campaign manager Matt McGrath: “New Team Nathan Deal spin on UGA ‘undocumented’ gaffe: ‘I would have gotten away with it too, if it weren’t for those meddling kids.'”

Peach Pundit’s Jon Richards, meanwhile, argued that both sides were wrong. Video is here; judge for yourself.

Sure, this is all great campaign season fodder. One overlooked aspect, though: Just a week earlier, a sheriff’s deputy dragged a citizen journalist (who had been invited by the property owner) kicking and screaming from a GOP event in Dawsonville simply because Insurance Commissioner Ralph Hudgens didn’t like her videotaping it. The governor, in Athens, only took one question that wasn’t approved by his minions. In a world of trackers and YouTube, it’s no wonder candidates are getting more cautious. But our politics get more sanitized every day, and our politicians more insular. That’s not democracy.

Downtown Plan Ignored: Urban design professor Jack Crowley, who headed up the cut-rate (but still not paid for) preparation of the Downtown Athens Master Plan for the Athens Downtown Development Authority, explained the plan on Tuesday evening, Aug. 26, at Firehall No. 2 to a group of citizens who had previously traveled to Greenville, SC, to view that city’s downtown progress. Crowley told the group that the master plan is “largely a series of public projects” that can be paid for by public land leases, by SPLOST and by tax allocation districts, but that so far “nobody is paying attention” in government.

Crowley and his graduate-student researchers have explained the plan at several public meetings, and they have presented it to the ACC mayor and commission. He also wrote a series of articles in Flagpole detailing the various aspects of the plan. In Crowley’s overview the plan is an interlocking series of parks, connective boulevards, wider streets and sidewalks, residential and commercial infill and innovative transportation options involving light rail and commuter bicycling.

Crowley acknowledged that it will take leadership to start the master plan working—“a person who gets it.” [Pete McCommons]