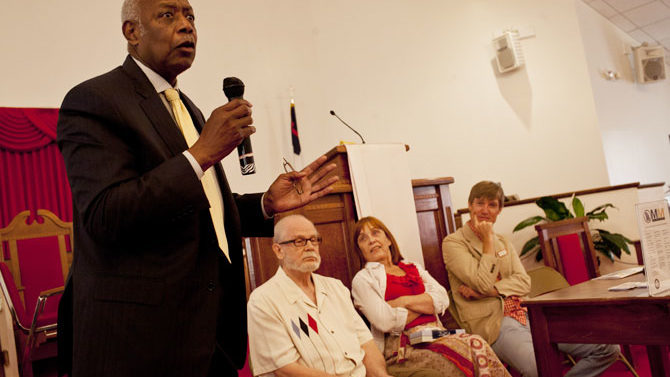 It was just another Moral Monday. Actually, it was Saturday, which is usually my fun day, my I-don’t-have-to-run day, but I went over to East Friendship Baptist Church to cover this, anyway.

The Moral Monday movement sprang up in North Carolina a few years ago when Republicans took over the state government and thousands of people protested cuts to public schools and other conservative legislation. It migrated to Georgia earlier this year. In March, 38 people were arrested at the capitol while protesting Stand Your Ground and the “guns everywhere” bill. (Incidentally, Athens state Sen. Frank Ginn was quoted in the New York Times calling them “fecal matter.”)

Georgia’s Moral Monday organizers—including Occupy Atlanta veteran Tim Franzen and Francys Johnson, a Statesboro lawyer and Southeast Region director for the NAACP—are barnstorming the state trying to drum up bodies for what they’re billing as a massive protest at Woodruff Park in Atlanta on Aug. 23. They stopped in Athens Saturday afternoon to speak to a crowd of about 30, including Athens-Clarke County Commissioner-elect Melissa Link and Tim Denson of Athens For Everyone.

“Nowhere do we see that intense poverty and struggle more than in Clarke County,” Franzen said. Johnson, a University of Georgia graduate, spoke about the contradiction between a wealthy university and a community with an alarmingly high poverty rate. “I’ve never seen a starker contrast than in Athens-Clarke County,” he said.

Franzen and Johnson brought with them three protesters who had gotten themselves arrested at the Gold Dome. Peggy Marx said she turned political when Rush Limbaugh slut-shamed Sandra Fluke, the then-law student who wasn’t allowed to testify before Congress about birth control in 2012. “I got mad,” Marx said. “I got really mad. Rush got me out of my chair, and I have not sat back down since.”

Joe Beasley of the Rainbow/PUSH Coalition, a civil rights group, had harsh words for Gov. Nathan Deal, calling him “one of the biggest crooks we’ve ever had in this state. He’s meaner than Eugene Talmadge,” the segregationist governor, Beasley said. Johnson made an outright plea for audience members to get Democrats Jason Carter and Michelle Nunn elected governor and senator, asking them to distribute absentee ballots to people in pre-trial detention at the Clarke County Jail. He said his goal is to help 125,000 people register to vote.

In addition to the gun law, what really galled Moral Monday participants was Deal’s decision to reject federal funding to expand Medicaid, which would have insured 650,000 Georgians, with the federal government footing the entire bill for three years and paying 90 percent afterwards. In some communities, it’s easier to get a gun than a slice of fresh bread, Johnson said.

“Here the federal government is offering free money for health care for 650,000 Georgians, and the state won’t accept it,” John Slaughter said. “There’s something morally outrageous about that.”

BandSwap: The Athens-Clarke County Commission was set to vote on this Tuesday, Aug. 4, but they had an interesting conversation about a “band swap” with Fort Collins, CO, at their agenda-setting meeting last month.

BandSwap is a Fort Collins program that invites bands from other cities—including Portland, OR, Lafayette, LA and Charleston, SC—to play shows with Fort Collins bands in their hometowns, then travel to Colorado for a festival in October. The Athens Downtown Development Authority has proposed spending $5,000 in CEP funds (a $60,000 pot the ADDA uses to assist downtown events like the Twilight Criterium and Hot Corner Festival) to participate in BandSwap.

Commissioner Jared Bailey, who has years of experience in the live music business as the founder of AthFest and former owner of the 40 Watt, said that BandSwap will benefit Fort Collins far more than Athens.

“It seems we’re being sold a bill of goods, and that’s my opinion of the event,” Bailey said. “That’s why when they called me, I declined to participate. They’re showing a lot of initiative, but I just question the value of this particular event.

“I just don’t think we need to be paying another city $5,000 so they can bring their bands here to promote them. Our bands—Athens, GA bands—don’t have a problem getting booked in Fort Collins or anywhere because of our reputation. A Fort Collins band probably would never get a gig here in Athens, just because it’s very competitive.”

Commissioner Mike Hamby, who’s on the ADDA board, defended the expense, saying that ACC needs to build relationships with other progressive communities like Fort Collins. So did Commissioner Kelly Girtz, who applauded the ADDA for funding new events. “It’s about bringing folks here who otherwise might not come, and certainly about giving some Athens bands an opportunity to get out to places they might not get otherwise,” Girtz said.