So Much for Local: The Classic Center Picks Out-of-Town Vendors 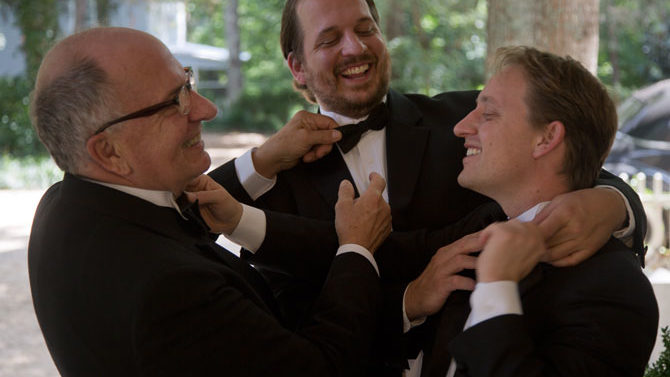 The next time you’re at the Classic Center, your rubber chicken (haha, I’m kidding) will come from someplace new.

Before you freak out—because, ideally, these contracts would go to Athens-based companies that will keep the money here—there is more to the story than “Classic Center Kicks Local Businesses to the Curb.”

“We mostly have local businesses serving the building,” Classic Center Executive Director Paul Cramer said. “It’s just that [these two contracts] are two of the biggest contracts a convention center typically has.”

The Classic Center typically bids out contracts every 3–5 years. No one’s bid has ever come close to matching Center Stage’s, which has held the contract for 15 years, but Levy bid this year, and “Levy’s reputation in the restaurant world is impeccable,” Cramer said.

Cramer and his staff spoke to their counterparts at the Georgia World Congress Center and visited Omaha, NE’s convention center, where Levy also handles the catering. The food and service were “impeccable,” Cramer said.

“This marks a new direction in scale and specialization for The Classic Center,” Epting Events’ Jamie Lewis said in an email. “As we conclude our 15 years of service as the venue’s partner through Center Stage Catering, we are extremely proud of the work we have done and will work closely with them to ensure a smooth transition. We wish The Classic Center all the best moving forward.”

All of Center Stage’s employees will be offered jobs with Levy, where they’ll have more opportunity to gain experience and advance their careers, Cramer said.

Going with a bigger AV company will give the Classic Center’s clients access to greater expertise and more equipment options, Cramer said. TSAV decided not to bid, Cramer said, which president Pete Dugas confirmed. Like the Eptings, he didn’t sound too torn up about it.

“TSAV has increased its staff by 15-plus year-to-date and anticipates even more aggressive growth in the coming year,” Dugas said. “We are very happy to be assisting our community in economic development in other ways and wish… the Classic Center team and board the best.”

As a side note, Athens-Clarke County commissioners did consider a policy a few years ago giving priority for government contracts to locally owned businesses but decided that they had an obligation to accept the lowest bids and worried that other governments would retaliate against Athens businesses. It cuts both ways.

Downtown Hotel: Cramer also said that, as far as he knows, the planned Hyatt Place adjacent to the Classic Center is moving forward without the tax incentives the ACC Industrial Development Authority voted down last month. “They say, ‘It’s coming, it’s coming,'” he said. “I’m sure it is. We’re excited for it to be coming in.”

Cramer said he didn’t lobby for the $2.5 million package of property tax abatements and low-interest bonds. “We don’t get involved in that,” he said. “We just hope we have a hotel connected to the center in the near future.”

Staying Busy: The Eptings still have plenty going on, even without the Classic Center contract. They’re opening a new office at Atlanta’s Goat Farm Arts Center; taping a reality show called “Black Tie & BBQ” for the on-demand service XFinity; and partnered with the Nature Conservancy for its annual fundraiser Hoochie on the Coochie (yes, that is its actual name). The reality show will be available “sometime in August,” Lewis said.

#SaveWRAS: Album 88 Alumni released a somewhat vague counterproposal last week to Georgia Public Broadcasting’s plan to take over daytime programming at the beloved Georgia State University radio station. The switchover happened Sunday as planned, although GSU is considering the possibility of a simulcast.

Auditor Addendum: Athens-Clarke County Commissioner Andy Herod sent me an email last week clarifying his views on the hiring of Steve Martin, Mayor Nancy Denson’s hand-picked choice for auditor, in particular his accusation that commissioners Jared Bailey and Jerry NeSmith were “grandstanding” when they opposed Martin’s appointment on the grounds that he was being hired without an open search and discussion.

“Just to be clear, my problem with what Jared and Jerry were saying was not that they/we shouldn’t discuss the qualifications of Steve Martin to be auditor in public but, rather, the way in which they were implying that the mayor was doing something sneaky and underhanded when, in actual fact, she had gone beyond what the charter requires her to do to let the commission know of her plans. Both Jared and Jerry knew that.

“As you know, the charter says that the mayor has an absolute right to make a nomination of anyone for a charter officer position and doesn’t need to consult the commission in coming up with a nominee (although a smart one will do so). The role of the commission is to vote up or down the mayor’s nominee. As it happens, the mayor actually went out of her way by providing the commission an opportunity to meet with and ask Steve questions before we had the appointment meeting last week.

“So, for Jared and Jerry to complain about the process the mayor used and for Jerry to imply that anyone on the commission who voted to appoint Steve was engaging in cronyism and was reprehensible was, to my mind, unfair.”

That’s all true, but it’s also true that Denson waited a year to fill the position and appointed someone without even advertising the job or an open vetting process. Even now, there’s still no job description and only vague plans to write one and conduct a nationwide search. That’s what Bailey and NeSmith were upset about.