Is Letting Sheep Graze on Invasive Plants a Baaaaad Idea? 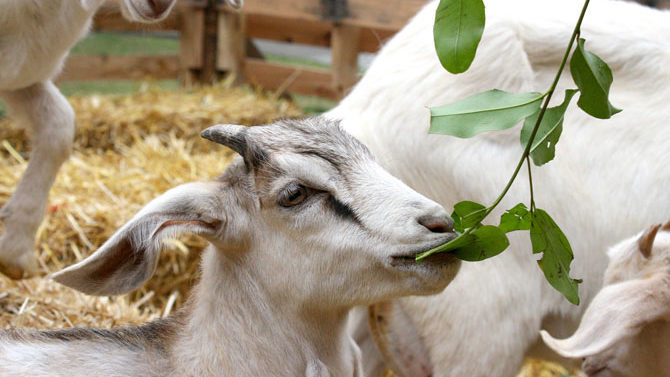 Sorry; couldn’t resist. Even if you live in a subdivision, you can now get your own living, breathing lawnmower.

The Athens-Clarke County Commission approved on Tuesday, June 3 a new law allowing people to rent sheep and goats to get rid of invasive plants like kudzu and privet on their property. Sounds like a great idea, right? More environmentally friendly than herbicides or a bush hog.

Not everyone thinks so. Behind the scenes, the “invasive plant community,” as they call themselves, was lobbying the commission to reject the proposal.

“While we understand the aesthetic and emotional appeal of prescribed grazing—goats and sheep are definitely warm and fuzzy—we have found no scientific evidence in support of their effectiveness for long-term invasive plant control in the southeastern U.S.,” the Memorial Park Weed Warriors—Linda Chafin, Ed and Sue Wilde, Gary Crider and Dorothy O’Niell—wrote to the mayor and commission. Critics also raised concerns about noise, disturbed soil and manure running off into creeks.

Kingswood resident Richard Alpaugh told the commission that his dog cornered and bit a sheep in 2010; the dog was later accused of attacking four other sheep, and Animal Control gave him two tickets. “It’s really bringing farm animals into an area where dogs are not used to having them.”

The “prescribed grazing” law was initiated by the ACC Planning Department several months ago in response to citizens who wanted to use livestock to clear brush but couldn’t, because keeping the animals on their property overnight would count as agriculture, which is illegal in residential neighborhoods.

Supporters said the concerns were unfounded. Lawyer and environmentalist Mikey Salter, who researched prescribed grazing while a student at the University of Georgia, said grazing by goats does not appear to contaminate water. UGA has used its “Chew Crew” to munch through invasive plants on stream banks since 2012, and College of Public Health students are conducting research on the effect on Tanyard Creek.

“Sheep are quiet,” said Jennif Chandler, a Madison County rancher who rents out her sheep and goats for prescribed grazing. “They do not stay long enough to create a manure problem.”

The commission eventually approved the law by a 6–4 vote, with commissioners Jared Bailey, Jerry NeSmith, Doug Lowry and George Maxwell opposing it. “I’m concerned about unintended consequences that we really didn’t bring in the experts to discuss with us,” NeSmith said.

Commissioner Andy Herod said planners did “a tremendous amount of research,” and he he sees the law being seldom used, mainly on steep terrain where a bush hog can’t go.

Commissioner Allison Wright also noted that sheep, goats and dogs must all be fenced in (or, in dogs’ cases, leashed) by law, putting two layers of protection between them.

Prescribed grazing requires a permit from the planning department. A 24-hour emergency contact is also required. One sheep or goat per 2,500 square feet of property being cleared, and they can stay for up to 30 days.

But you still can’t have a chicken.

Tackle Football: It was a Tuesday, which meant somebody was mad at Leisure Services, of course. This time, it was coaches with the Northeast Georgia Youth Football League, who said the department is denying them access to county-run fields.

According to longtime coach Melvin Hayes, Leisure Services told the league that it can’t use Sandy Creek Park for its opening day ceremony Aug. 23 because of a triathlon scheduled for the following day. Although the league generally has use of fields at Holland, Satterfield, Lay, East Athens and Southeast Clarke parks from July through November, all other parks have already been reserved for soccer and Little League that day, ACC Recreation Division Administrator Myla Neal said. Leisure Services offered two dates earlier in the month, but they are too early to make preparations for the season to begin, Hayes said.

Coaches are also unhappy with what they said is a new policy requiring background checks not only for coaches, but for other volunteers and parents as well. (Given the rough neighborhoods many of the players come from, it’s not uncommon for parents to have records, and the man point of the program is to keep kids from repeating those mistakes.)

“It’s not the background checks [for coaches], because we’ve been doing that for years,” Hayes said. “It’s the additional stuff they are asking us to provide,” such as training in preventing concussions. USA Football, a national organization the Athens league is affiliated with, provides such training, but Hayes said coaches have been given no help in deciphering whether that training fulfills ACC’s requirement.

Background checks are only required for coaches, defined as people giving instructions on the field, Neal said. “A mom bringing snacks is not considered a coach,” she said, adding that the concussion policy has been in place for a couple of years.

Disputes between youth sports leagues and Leisure Services have flared up from time to time over the years, creating a general atmosphere of distrust. Whether it’s a simple misunderstanding or something more, the tension is real. “I hate to say it, but I’m disgusted by the fact that there’s such a disconnect between the people who control the facilities and the people who want to use the facilities,” Christian Norton told commissioners.

There is also a racial component. “Since [African American former assistant manager Richard White] left, we have not had anybody to turn to,” Mike Willis told commissioners.

White’s replacement, Robert Hiss, is, well, white, as are all of the top brass at Leisure Services. Alvin Sheats, speaking on behalf of the local NAACP chapter, warned the commission about the lack of diversity last month. “This is not a reflection on anyone you all just hired,” he said. “However, do keep in mind you are expected to employ with diversity in your upper-level management as well as your general labor force.”

Mayor Nancy Denson and commissioners told Manager Alan Reddish to look into the football issue. “I can certainly attest to the fact that it’s a strong program that helps people in our community, and I’m confident we can reach a positive resolution,” Commissioner Kelly Girtz said.

Combined with Lyndon House Arts Center brouhaha a few months ago, this is yet another reason to audit Leisure Services.

Oh, Yeah: And the commission also passed a $126 million budget—although the public didn’t seem nearly as interested in that as whether their neighbor might get a goat or they can use a football field.

Commissioner Doug “Dr. No” Lowry voted against the budget, because that’s what he does, and so did Commissioner Allison Wright. She took issue with the way ACC spends hotel/motel tax revenue; six of every seven cents, or $1.9 million, now goes to the Classic Center and the Convention and Visitors Bureau. $500,000 should be transferred to the ACC Economic Development Department, Wright said. “We could be using hotel/motel tax for that and not drain the general fund,” she said.

Girtz and Commissioner Jared Bailey said they agree with Wright, but not enough to vote against the budget. Girtz proposed a 3–5 year plan to wean the Classic Center off the hotel/motel tax.

“I believe I have the most gerrymandered district in the state of Georgia,” said District 7 Commissioner-elect Diane Bell, referring to the map Republicans pushed through in 2012 that turned Clarke County into a jigsaw puzzle on acid. Legislators offered little hope that they will replace it with the simpler commission-drawn map.

Nor would they get behind changing the state law that prohibits cities from raising their minimum wage. “I don’t think there’s anything more local than your own employer setting your pay,” Ginn said.

And they said they have nothing to do with the Board of Regents policy prohibiting undocumented immigrants from attending UGA.

One issue that lawmakers did say they’d be willing to work on is the post-Prohibition law barring craft breweries from selling their products directly to consumers. (Creature Comforts and Terrapin can only offer tastings during tours; producers can only sell to wholesalers who turn around and sell to retailers.) “We lost breweries, craft breweries to Asheville [NC] not long ago because of the three-tier system,” Quick said.

Alcohol laws aren’t always logical, quick said, noting that a wine store can host a wine tasting, but a liquor store can’t give away wine samples. “Nobody has ever been able to tell me how that makes sense,” she said.

Williams, who co-sponsored with Frye a bill allowing beer and wine sales near college campuses that could pave the way for a downtown grocery store, said he was surprised that groups like the Christian Coalition sat on the sidelines. But convenience stores fought it because they didn’t want the competition, he said. Williams questioned whether the three-tier system still works, but “people will fight to the death to keep it,” he said.