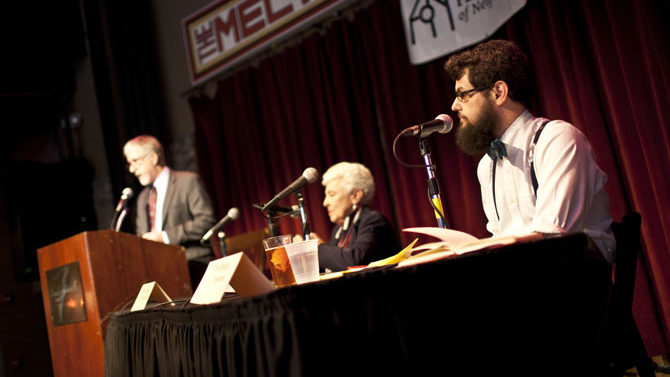 As far as the mayor’s race goes, this is not a primary. There will not be a runoff. There’s no November election. This is for all the marbles, on May 20. Rejoice in the fact that campaign season is mercifully almost over, and we can all go back to being friends soon, right?

Paying for It: Moving on, people have been asking, “How’s Tim Denson going to pay for all this free stuff he’s promised us?” That’s a great question, and one Tim hasn’t answered as well as he should have.

Mayor Nancy Denson’s proposed 2015 budget  is $2.6 million bigger than the current budget. Nancy isn’t raising taxes, but the economy is recovering, and so taxes are going up. She has opted to spend most of that windfall on a 2.5 percent raise for Athens-Clarke County employees. And Lord knows they deserve it. They’ve had one measly $500 raise since 2008, and ACC is falling further and further behind what comparable local governments pay, which hurts ACC’s ability to recruit and retain top employees. But then again, a lot of us in the private sector haven’t had a raise in years, either (coughPetecough).

The point is, the money is going to be there to do at least some of the things Tim wants to do. He estimates free bus service would cost $600,000 and free child care about $1.5–2 million. We can quibble with those figures (Nancy says those programs would be far more expensive, and at least in the case of transit, I think she’s right) but take him at his word, and he could make quite a bit of progress toward those goals this year if he were mayor right now, if he made them priorities. As long as the economy continues to improve, he’ll have some money for new programs. That’s how Mayor Heidi Davison gave us night and Saturday bus service—by presiding over a growing economy, not by raising taxes.

Tim and Taxes: Nancy took aim at Tim’s plan for a “progressive property tax” during a Federation of Neighborhoods forum Monday, May 5, calling it “absolutely wrong,” “devastating” and “illegal” because it would violate the state Constitution.

When Tim initially talked about a “progressive property tax” at a Junior League forum a few weeks ago, he said it would ease the burden on low-income homeowners while raising revenue. Which, as Nancy points out, would inevitably involve raising taxes on others—although “as much as double,” as she told WGAU 1340 AM’s Tim Bryant, is probably an exaggeration.

If Tim were proposing an income tax or a property tax rate tied to income, Nancy would be right about its legality, but he’s not. In fairness to her, Tim, until recently, has not been clear about what, exactly, his plan is, but he says that she mischaracterized it. Nancy’s attack came during her closing statement at the FoN forum—a question wasn’t asked about it—so Tim did not have a chance to respond publicly. However, he has since explained that he is simply proposing a larger homestead exemption for low-income homeowners, similar to what many local governments do for seniors and veterans. (Nancy herself proposed a property tax freeze for seniors in 2011, but commissioners rejected it over concerns about—this may sound familiar—lost revenue.) Tim’s idea sounds similar to former Mayor Heidi Davison’s proposal for “circuit breakers,” which would have capped property taxes for low-income homeowners so that they were not forced out of gentrifying neighborhoods. Circuit breakers were never enacted due to ACC staff concerns about the difficulty of implementing them.

Expanding the homestead exemption for families below the poverty line could be done with a majority vote in the state legislature and approval by local referendum, according to Clint Mueller of the Association County Commissioners of Georgia.

District 3: Commission candidate Herb Gilmore took what some people perceived to be a swipe at Tim and rival Melissa Link, who’ve been campaigning in historically black neighborhoods, during the FoN forum. Gilmore, who is counting on African American support, criticized “politicians who go into communities, especially minority communities, and promise the world,” but then can’t deliver. Buena Vista resident Link, meanwhile, said she’ll represent the “true diversity” of the district and talked about her friends in the Hancock Corridor and Rocksprings. Another candidate, Dustin Kirby, said outreach to Hispanics will be a priority for him.

Gilmore, however, was the lone candidate who did not attend an event Saturday, May 10 at African American Hill Chapel Baptist Church due to a family emergency, which could end up hurting him at the polls.

Rachel Watkins, the fourth candidate in the race, gave her strongest performance yet at the FoN forum, picking out the specific issues of the Prince Avenue corridor study and downtown design guidelines (whatever happened to them?) as ones she would focus on. She spoke with confidence in trying to show that she would not be afraid to stand up to the mayor or ACC staff.

School Super: The Clarke Central and Cedar Shoals PTOs hosted a forum for eight of the 15 (count ’em, 15) candidates for state school superintendent Wednesday, May 7 at the ACC Library.

On the Democratic side, Valarie Wilson—the executive director of the Atlanta BeltLine, Decatur school board chairwoman and former human resources director for Fulton County schools—and state Rep. Alisha Thomas Morgan (D-Austell) were the most polished candidates.

Though she dodged the issue that night, Morgan is pro-charter school, which is not the position of most in the Democratic Party, nor of Wilson. “I am adamantly opposed to anything that moves public education dollars away from public education,” Wilson said.

Morgan offered a strong defense of Common Core, which the tea party believes is a socialist plot, even though the standards were developed by a bipartisan group of governors, including Sonny Perdue. “We’ve allowed anti-Obama folks to turn this into something it’s not,” she said.

Two Republicans showed up, Richard Woods and Kira Willis (who ran as a Libertarian in 2010). Willis advocated for public school choice because each school cannot provide enough programs to serve the interests of all students. Woods primarily spoke about the need to scale back standardized testing and give teachers autonomy in the classroom.