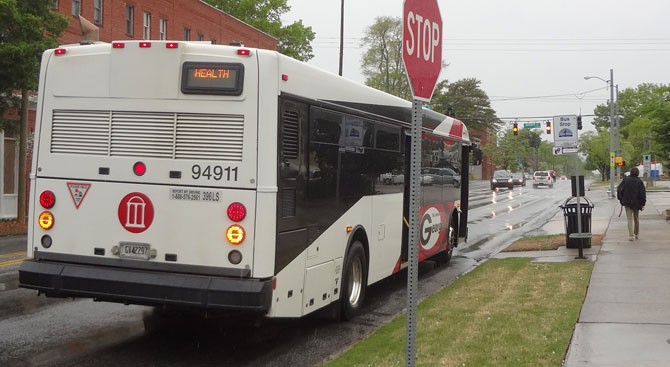 Ever since the University of Georgia started operating a free bus that runs between the Health Sciences Campus in Normaltown and the main campus, Athens Transit has lost ridership and revenue as riders opted to take the free bus that runs every 20 minutes rather than wait for the one that comes once an hour and costs $1.75.

No more. The Athens-Clarke County Commission will consider a new agreement with UGA that sets the rate at which UGA reimburses Athens Transit for providing “free” rides to UGA students and employees. If the commission approves the agreement, starting July 1, the Health Sciences bus won’t stop on Prince Avenue anymore, instead operating as an express bus between the two campuses. [UPDATE: After this column went to press, I learned that commissioners may remove this clause from the contract when they vote May 6 until a comprehensive transit study is done later this year.]

Campus Transit, funded by student fees, currently has an “open door” policy, allowing anyone to board free, because it’s not worth the trouble to check UGACards. It was ACC’s idea to end that policy for the Health Sciences bus. “This was not a UGA request,” ACC Assistant Manager Blaine Williams said.

Exceptions are carved out for the Milledge Avenue bus that serves fraternities and sororities, as well as UGA’s evening service to student apartment complexes on South Milledge Avenue and Riverbend Parkway. In addition to the Health Sciences bus, the language would also apply to UGA buses running to the new veterinary teaching hospital on College Station Road when it’s built.

UGA students and employees account for more than half of Athens Transit’s 1.7 million annual riders and contribute $1.4 million to the system, so the contract is vital. “We were able to get several concessions we thought were advantageous to both parties,” Williams said at the commission’s Thursday, Apr. 17 agenda-setting meeting. The contract addresses several issues that UGA and ACC staff have been negotiating for some time:

• How to split about half a million dollars in additional federal funding resulting from UGA reporting its ridership to the feds. (ACC will get 40 percent and UGA 60 percent through a credit against its reimbursement to ACC.)

• The contract will run for three years, not one, and each year the rate UGA pays will be tied to inflation.

• The loss of more than 20,000 Athens Transit riders and $40,000 in lost revenue since UGA began operating the health sciences bus.

The bottom line is that Athens Transit, though one of the best systems for a city this size in the nation, is not meeting the needs of the community, and so citizens turned to a cheaper, more convenient alternative. Seeing that, county officials opted not to improve the service, but to get rid of the competition. It’s like Warner Brothers shutting down Marvel because too many people went to see Captain America.

“I wonder if we couldn’t change our routes on Prince Avenue so it is more convenient for folks who won’t use the UGA bus anymore,” Commissioner Jerry NeSmith said. But that would cost money, Manager Alan Reddish replied, and so everybody dropped it, of course.

There is hope. The contract binds UGA to participate in an upcoming study that the commission committed to do back in December, after a Flagpole cover story on this issue prompted a discussion about perhaps combining the UGA and ACC bus systems and providing free transit to everyone. That study is scheduled to take place sometime after the new fiscal year starts July 1.

Commissioner Kelly Girtz urged delaying a decision about the Health Sciences bus until after that study takes place. “It might be a worthwhile approach, with this study coming up, to hold off on that component until the study is complete,” he said.

Nancy and Prince, Part Infinity: The sun rose in the east, and so Mayor Nancy Denson once again caused a stir while talking about Prince Avenue, this time at an Athens GOP meeting Monday, Apr. 14.

One attendee asked Denson if she had heard from any of business owners about the Complete Streets: Prince Avenue proposal for a road-diet demonstration project aimed at making the street safer to cross. Denson said she had not. “I don’t know” what business owners think, she said.

Either she forgot or she ignored the input, but Denson has heard from business owners on the topic. The batch of emails Flagpole obtained a few weeks ago includes one from Avid Bookshop’s Janet Geddis, who wrote that three of her customers were hit by cars, and she and her employees have had a number of close calls.

“I sometimes wonder how people’s feat of crossing Prince may be negatively affecting my business,” Geddis wrote. “I suspect that having a much safer way to get across the street would lead to an increase in foot traffic and a corresponding increase in sales.”

Denson also heard from Normaltown property owner Jimmy Wilfong, who thinks the road diet will choke traffic. Guess which one she listened to?

Denson also repeated her canard that road diet proponents want to somehow game the results by doing the demonstration in April (a month she previously described as “early summer”). “You don’t do it when traffic is lightest,” she said. “You do it during real traffic.”

For one thing, proponents agreed to Denson’s suggestion to move the demonstration to fall, and then the mayor wouldn’t put it on the agenda, anyway. For another, there is the same amount of traffic in April as there is in October, except for football Saturdays. It makes no sense to design our transportation infrastructure for the seven days a year when 100,000 people are coming into town. Like every other street in Athens, Prince is a mess on gamedays, and it’d a be a mess whether it had three lanes or 30.

There was a time back in February, when this idea of a demonstration was first proposed, when it looked like a no-brainer. Literally no one was opposed to it, at least publicly. The business and property owners along Prince wanted it. Neighborhood residents wanted it. Athens Regional Medical Center wanted it. The Chamber of Commerce, once reliably opposed to anything progressive, was not standing in the way. Yet now, somehow, the issue has become so muddled that it may never happen—which is probably the point.

“It’s become a political football,” Denson said at the Republicans’ meeting. Wonder how that happened.

Workforce Housing: The ACC Housing and Community Development Department is getting ready to hire a consultant to do a long-discussed workforce housing study, Director Rob Trevena told commissioners at a Tuesday, Apr. 14 work session. The study will look at the rental housing needs for working-class families in a market dominated by student apartments that are ill-suited for other tenants (for example, they usually have as many bathrooms as bedrooms or more). It will also look at what happens to Athens’ existing stock of student housing now that thousands of UGA students are moving into new developments downtown.

Downtown Development: I may have been too harsh in criticizing one such development, the Landmark Properties proposal for the Armstrong & Dobbs property. Commission District 3 candidate and scourge of bad development everywhere Melissa Link reports that she recently attended a meeting with ACC officials to discuss the project, and she came away with the impression that it’s not as bad as she previously thought. If Melissa’s not out there chaining herself to a bulldozer, we probably don’t have much to worry about.

But I’m still not convinced it’s great. The parcel is a key gateway into downtown. Jack Crowley’s recently completed downtown master plan (p. 12) recommends residential or office space along Wilkerson Street, where Landmark wants to put a parking lot, the absolute worst use of land possible. Nor, as stated earlier, does the development include the full Hickory Street Extension connecting the Multimodal Center and UGA.

School Budget: Other than state-mandated step increases, the Clarke County School District’s proposed $125 million budget doesn’t include pay raises. On the other hand, no furlough days! And after years of layoffs, the district is hiring 33 new employees, including 18 teachers. CCSD is still running an anticipated $3 million deficit, but with $22 million in reserves, the financial picture is looking much more stable than it did a few years ago.

The Board of Education tentatively approved the budget Apr. 10. Two public hearings are scheduled—at 6 p.m. Tuesday, May 13 at Gaines Elementary School and Thursday, May 15 at Alps Road Elementary School—before final passage June 10.