Come Back, Selig, All Is Forgiven 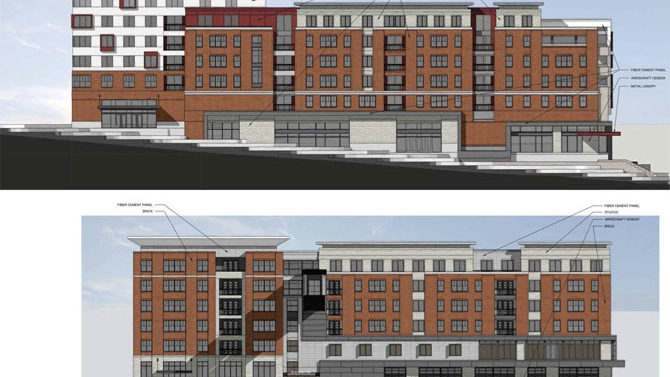 Patterson Hood, if you’re reading, please write us a song so we can all drive to the Selig Enterprises office in Atlanta and serenade Jo Ann Chitty. Maybe it’s not too late! Maybe she’ll come back!

Selig and its new majority partner, Athens student housing developer Landmark Properties, have submitted new plans drawn up by Oconee County’s Williams & Associates for the eight-acre tract between East Broad and Oconee streets—and they’re worse than ever. As Athens-Clarke County planning commissioner Paul Dellaria presciently put it last year: “We’re actually getting a better project and a few nifty perks we won’t get if we turn it down. Because they can build this by right. They don’t need us.”

Well, we didn’t turn it down—Selig won ACC commission approval—but the project went kaput for financial reasons, and now we don’t get those nifty perks, and they don’t need us.

Here’s an example: ACC code requires ground-floor commercial space in downtown buildings. Selig, recognizing that Wilkerson Street isn’t suitable for retailers, asked for and received a variance to put a residential-only building there. By contrast, Landmark skirts the issue altogether by putting a surface parking lot and a 10-foot-high retaining wall along Wilkerson. That’s an ingenious tactic to avoid having to go to the ACC Commission for approval and all the messy public comment that entails.

As promised, the development is slightly smaller than the proposal Selig abandoned last year: about 60,000 square feet of commercial space versus 100,000, 890 apartment bedrooms versus 990 and almost 1,200 parking spaces versus more than 1,400. But there are so many other problems, not just the ugly retaining wall running along Wilkerson, around the corner and up Oconee Street to the development’s main entrance.

As with the Selig plans, that entrance will serve as the legally required Hickory Street extension connecting the Multimodal Center to Oconee Street. But it’ll be a road to nowhere. Landmark isn’t acquiring the Dixie Canner property or the old Jittery Joe’s Roasting Co. building, so the road will just dead-end before it gets to East Broad Street.

Access from East Broad Street will be through a driveway between Foundry Street and Hickory Street. Other than that, the development won’t address East Broad Street at all. You’ll just see the side of a parking deck if you look to your right while walking down the hill from downtown to the river.

It appears that Landmark will be able to use Selig’s easement for a sloping bike and pedestrian path connecting the development to the future rail-trail behind it, so that’s good. Oddly enough, though, plans for the first leg of Firefly Trail just came in on last week, as well—yet neither ACC commissioners nor rails-to-trails committee members had seen them.

We had an opportunity to lure something different, something better, but we squandered it because Mayor Nancy Denson has blocked calls to review our downtown design guidelines by refusing to assign it to committee. I’ve always been skeptical of the River District, but it did present an intriguing opportunity. Now, that’s gone, too.

So, probably what will happen now is we’ll ball up our fists and wail for awhile, and then forget, and then re-elect everybody, and nothing will happen until some other fugly development comes through, and then we’ll do it all over again. Wash. Rinse. Repeat. Bob Sleppy of Nuçi’s Space said it better than I could: “Athens, I’ve been madly in love with you since the day we met 23 years ago. However, I say with kindness, please get your shit together.”

Nancy and Tim on Downtown: The topic of downtown development came up during a Saturday, Apr. 12 forum sponsored by the Youth Academy and organized by Marvin Nunnally, during which high-school students questioned the candidates.

Mayoral candidate Tim Denson floated an idea (by his own admission, still vague at this point) to set up a tax structure that would encourage landlords to rent downtown space to locally owned businesses rather than chains. And he said the zoning code should encourage sustainable, quality development built to LEED environmental standards.

Mayor Nancy Denson said she doesn’t support rent control (which Tim actually didn’t propose) or telling landlords whom they can rent to. She revealed that, later that afternoon, she was meeting with a developer who is planning a “hundreds of millions of dollars investment which, if we get it, will greatly enhance downtown.”

Tim and Nancy on Prince: The forum then moved on to another hot-button topic, pedestrian safety on Prince Avenue. Tim said that he supports the Complete Streets: Prince Avenue proposal to do a trial road diet to see if crossing the street becomes safer without choking traffic. “I want to see us [residents and county officials] working together, and it’s really exciting to see that,” he said.

Nancy took issue with the idea that residents and county officials are working together. “To my knowledge, only one official is involved in it, Commissioner Girtz,” she said. “Staff has taken no position on it.”

That’s not true, though. While Kelly Girtz is spearheading the effort to push through the demonstration project, commissioners Allison Wright, Jared Bailey and Jerry NeSmith have been directly involved as well, and so have Assistant Manager Blaine Williams and Transportation and Public Works Director David Clark. In fact, Clark’s department is doing a traffic count on Prince right now.

Nancy decried the “misinformation” about her position on Prince, but the only misinformation was coming from Nancy herself. She said that Complete Streets: Prince Avenue was calling to do the demonstration in “early summer,” when traffic is lightest, which isn’t true, either. The group originally proposed April but then agreed to Nancy’s suggestion to move it to the fall. She has so far refused to put it on the agenda, anyway.

In addition, the mayor told the Athens Banner-Herald last week that she did not refuse to schedule a vote for political reasons, which directly contradicts what she told a constituent in an email obtained by Flagpole through an open records request, as well as what she told Girtz. She also told the ABH that she is concerned about buses blocking traffic and about ambulance accessibility if Prince is reconfigured. Since she met with Complete Streets: Prince Avenue’s Tony Eubanks in February, she knows those concerns are unfounded; the plan leaves space for buses to pull over and ambulances to get through.