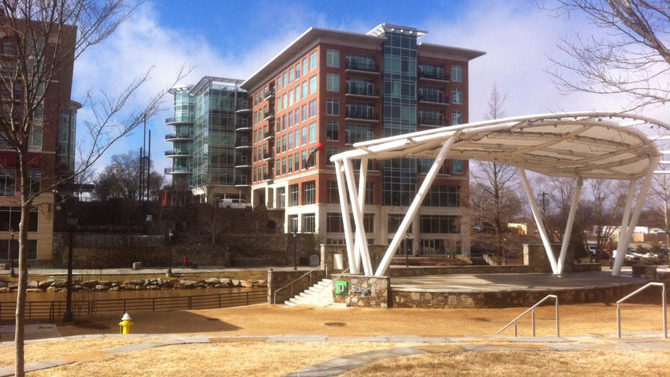 The Athens Downtown Development Authority took a field trip to Greenville, SC, in February. We could all learn something.

As in Athens, Greenville’s downtown began to die when new shopping centers lured retailers to the suburbs. In response, Greenville created a downtown master plan in the 1980s, which resulted in the renovation of many downtown buildings, new hotels and office buildings, an arena, a minor-league baseball stadium and a performing arts center. Many of those projects were public-private partnerships in which taxpayer investment encouraged private development in languishing industrial, commercial and residential areas. The West End Historic District—a neighborhood adjacent to downtown that strongly resembles Athens’ downtown—was turned into a thriving arts and entertainment district.

Many of the ideas in Jack Crowley’s master plan for downtown Athens (see the latest installment in his continuing series) were done in Greenville decades ago. For example, the city created many new parks, and Main Street was narrowed from four lanes to two—something Crowley wants to do with Washington Street.

ADDA Executive Director Pamela Thompson was particularly impressed with how Greenville has addressed the Reedy River. Athens has always turned its back on the Oconee. Greenville, on the other hand, built not just a biking and jogging path, but a riverwalk with quality development (not cheaply constructed student apartments) including restaurants, shops, offices, artists’ studios, a hotel, offices, a parking garage, gardens, public restrooms and kids’ activities alongside it.

The main difference between Athens and Greenville is that Greenville officials and citizens created a plan and saw it through. “Everybody was committed to the vision,” Thompson said. “They stuck with it. It’s essentially what they envisioned.”

The same can be said of Atlanta, where the BeltLine project has overcome numerous obstacles over 15 years and is now spurring hundreds of millions of dollars in new development and redevelopment—condos, shops and restaurants—along its two miles of completed paths.

Here in Athens, we can’t agree merely to have a civil conversation as a community. Issues like walkability on Prince Avenue are so politically toxic that our leaders refuse to even gather data, let alone take action. Meanwhile, the cities we are competing against, like Greenville, Atlanta, Austin, TX, and my hometown of Birmingham, AL are leaving Athens in the dust. They set in motion decades ago improvements that we in this supposedly progressive city cannot even bring ourselves to talk about.

If our community were able to agree to move forward today, it would be decades before we could see the benefit. “What [Greenville] has been able to accomplish is a really great model, but they were the first to tell us it took 40 years,” Thompson said.

Armstrong & Dobbs: Speaking of downtown, ACC planners are scheduled to review plans for the latest Landmark Properties/Selig Enterprises proposal for the Armstrong & Dobbs tract at 1:30 p.m. Thursday, Apr. 10 at the planning department. These plans-review meetings are open to the public to observe, although public comment is not allowed. So go if you want—fair warning: they’re pretty technical—or check flagpole.com if you just want more details on the development. Spoiler alert: I’m willing to bet it doesn’t look much like what they’ve got in Greenville.

In Your Business:  Jim Flannery, founder of the local tech incubator Four Athens, recently announced that Adam Smith won the Athens Made logo contest. The logo is meant to promote locally owned companies. Go to athensmade.com to check it out.

Now you can spend your bitcoins on something other than anonymously purchased illegal drugs. The downtown vintage store Dynamite Clothing is accepting the online cryptocurrency.