Selig Is Back… Sort of

Hey, remember when everybody was really upset/excited/nauseated over the Selig Enterprises development and the downtown Walmart? Fun times. Let’s do it again!

Athens-based student housing developer Landmark Properties is in the process of buying at least part of the former Armstrong & Dobbs property near downtown Athens.

The eight-acre property, once a building supply company, near the corner of Oconee and East Broad streets has continued to sit vacant since Selig abandoned controversial plans to develop a massive complex of apartments and retail stores last fall. Selig is a minority partner in the new project, Landmark CEO Wes Rogers said. “We feel like they understand retail well,” he said.

Rogers would not reveal any potential commercial tenants, but he did (almost) nix the idea of everyone’s favorite smiley-faced big box coming into the development. “I was born here. I want to be a good steward of the community,” he said. “We currently have no intention of putting a Walmart in the site in spite of [Walmart’s] interest in doing so.”

While many folks think downtown needs more student apartments like a hole in the head, Rogers said he believes there there is still demand for luxury living within walking distance of campus and nightlife. The Standard, another Landmark project under construction at the corner of North Avenue and Thomas Street, is already 100 percent pre-leased for fall, he said.

Rogers said the development at Armstrong & Dobbs would be comparable to The Standard, with four or five stories of student-oriented apartments above ground-floor retail with brick and stone architecture wrapped around a hidden parking deck. The new development will be smaller and less dense than what Selig proposed (about 100,000 square feet of commercial space, 375 apartments and 1,400 parking spaces).”We’re still kind of working through those details,” Rogers said.

However, another source who has seen the plans—which won’t be filed for a month or two—called them a “stucco nightmare” with the bare minimum of commercial space required by law that will make Athens residents long for Selig.

We’ll see. If so, we get what we get. Unlike Selig, Landmark does not intend to seek a variance or a rezoning, so neither the ACC Commission nor citizens would have any say in how it is developed as long as it meets local zoning laws, which allow up to 200 bedrooms per acre downtown.  “We intend to develop it according to the existing code,” Rogers said.

That decision had more to do with Landmark’s success with developments like The Standard that meet the ACC code than with vocal opposition to Selig, he said.

After approving the Selig development in July, several ACC commissioners said they wanted to review downtown zoning and design guidelines in light of many residents’ concerns about the project. They also wanted to study how the glut of student apartments downtown would affect older suburban complexes. Well, guess what? They didn’t do either one. Another opportunity lost.

Helme moved to Athens in November when her husband took a job as assistant to UGA Vice President for Student Affairs Victor Wilson. The Fort Lauderdale, FL, native got her bachelor’s degree in English and journalism from the University of Florida (please don’t hold it against her) then went to the University of Pennsylvania for a master’s degree in nonprofit development and started a small consulting firm focusing on youth, education and nonprofit board training while living briefly in Chicago.

“That combination is exactly what they need right now,” Helme said. Her emphasis will be on making sure AthFest Educates runs efficiently, ensuring the nonprofit’s grants for music and arts make the biggest possible impact, communicating that impact to the community, providing support for grant recipients and developing a longer-range strategic plan. “If AthFest wants to grow, what do they want to accomplish in that three-to-five year timespan?” she said.

Don’t expect major changes to AthFest Educates’ two major fundraisers, the annual half-marathon and June music festival. Ultimately, she’s in charge of both events, but Helme said she’ll rely on the nonprofit’s extremely hardworking board to do the heavy lifting of organizing those events so that she can focus on the education and organizational development side of things. “Clearly, they’ve got the music festival and the half-marathon down pat,” she said.

Medical Marijuana: Even though state legislators failed to pass a bill legalizing a form of medical marijuana that, alas, won’t get you high, Gov. Nathan Deal is considering moving forward with clinical trials.

Deal told an Athens GOP meeting Saturday, Mar. 29 that he is talking to the state pharmaceutical board, composite medical board and the state medical school, Georgia Regents University in Augusta, about experimenting on volunteers with cannabinoid oil, a marijuana-derived compound that could be effective in treating seizures and other medical conditions.

Don’t expect Georgia to join the ranks of states like California and Colorado, where marijuana is legal or all but legal. “This is not something we want to open the floodgates on,” Deal said. “It has to be done in a very controlled manner.”

If the trials were successful, the General Assembly could take up medical marijuana again. “It will lay the foundation for us to do something legislatively in future sessions,” he said.

Pineapple Dawg: If you’ve felt accosted by a menacing bulldog as you enter the Alps Road Kroger, don’t worry—he just wants to sell you some pineapples. 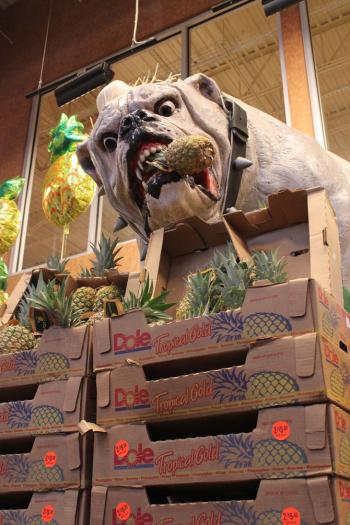 Luckily, this bulldog has a mouthful of pineapple, or it’d tear you limb from limb.

The fiberglass sculpture that teeters on the line between mascot and hellhound received a bit of notoriety last week, getting a mention on the sports/pop culture website Deadspin. It’s been featured in Flagpole before, but we’ve never gotten to the bottom of why, exactly, it’s there.

It seems that Southeastern grocery stores compete in a pineapple-selling contest each year. Kroger’s store manager told Flagpole the dog is a way to get people to notice the pineapples and therefore help boost the store’s success in the competition. Kroger gets the dog from regional beer distributing company Northeast Sales Distributing; Curtis Burns, sales manager there, said the dog was designed by the distributor’s president, Frank Sinkwich Jr. “We actually loan them out to one or two Krogers for their pineapple displays,” he said.

Incidentally, according to Northeast Sales’ website, the company’s founder, Frank Sinkwich Sr., was a Heisman Trophy winner at the University of Georgia. Guess the bulldog spirit runs deep in the family. [Kristen Morales]

Media Matters: Athens Banner-Herald Director of Audience Chris White and Community Engagement Editor and Readers’ Advocate Andrea Griffith-Girtz (who made up these titles?) sat down with a few of their readers to talk about the new paywall and the print version of ther paper Wednesday, Mar. 26 at Avid Bookshop.

Griffith-Girtz said the ABH was “one of the last ones” in the Morris Publishing Group to charge for online content. She says that their heavy online users have remained loyal, and their decline in print readership subscription has leveled off.

“For a while, we were trying to stay afloat and now we’re doing well,” Griffith-Girtz said. When the ABH sold its building in 2012, it relieved them of a great financial stressor. White said he believes “the company’s completely out of debt now.”

What ABH online readers want is different than what ABH print readers want, Griffith-Girtz said, which has led them to change the way they cover things in print versus online. For example, mug shots are no longer in the print edition. They still put them up online, but White said that readers felt that something in print had a “more permanent” feel to it than online.

Only four readers showed up, but they weren’t happy about the ABH’s news coverage. “I look at Flagpole to get my real news in Athens,” one attendee said. “There and The Red and Black.” Readers said they want more public affairs stories about education, politics and downtown development.

They also bemoaned the decision to put school lunch menus in the print paper. White said that was the “most controversial” thing they’ve ever put in the paper, and he’s received 200 phone calls from readers complaining about it.

Readers also wanted to know when the ABH is going to beef up its staff and hire more reporters to better cover the school board, community meetings and the University of Georgia. One said he would “love to see the newspaper go back to what it was.”

The newsroom has been cut almost in half since its peak a decade ago. Two positions are currently open. Former government and business reporter Nick Coltrain left last month for, uh, greener pastures in Colorado. The other is a “half copy editor, half breaking news” job, White said. Griffith-Girtz said she wishes they had more general assignment reporters, which she doesn’t expect “will happen any time soon.” [David Schick]

More Media: After six years of hemorrhaging money, UGA is ceasing to air locally produced content on WUGA-TV and will lay off six employees effective July 1.

Under former Grady College of Journalism and Mass Communications dean Cully Clark, UGA bought the former Toccoa NBC affiliate for $1.8 million in 2008 and eventually sank $11.5 million into the station. It cost $866,000 to operate last year but brought in just $7,000, according to a report commissioned by UGA President Jere Morehead that was released last month.

UGA is not selling the station, which could fetch $2.5 million on the open market, the report said. Instead, the station will air PBS’s World Channel around the clock. The “reorganization,” as UGA called it, is expected to save $565,000 annually. Administrators decided it would take too long and cost too much to ramp up student involvement and local content, according to a news release. Station manager Jimmy Sanders, who makes $100,000 a year, according to Open Georgia, will remain onboard, as will an engineer.

Fix Your Bike: A flat tire won’t strand you on campus anymore. UGA has installed bicycle repair stations in Myers Quad and at the Miller Learning Center, the Main Library and the Ramsay Center with tire pumps and other basic tools, plus QR codes that allow cyclists to pull up instructions on their phones. In addition, staff from UGA Outdoor Recreation will teach bike repair clinics at the stations.

Outdoor Recreation worker and Warnell School of Forestry student Joseph Robinson launched the program with grants from the Office of Sustainability, the Facilities Management Division and Recreational Sports.

Clarke Central: The high school hosted a ribbon cutting ceremony Monday, Mar. 31 for a $29 million SPLOST project that will include renovating the west wing, the original 1971 east wing, the administrative and counseling wing, front entrance and athletic facilities, a new media center and expanding the auto shop, lab space and classrooms, as well as an electrical, mechanical and data system overhaul. Some students will be relocated to portables during the work, which is expected to wrap up in early 2016.