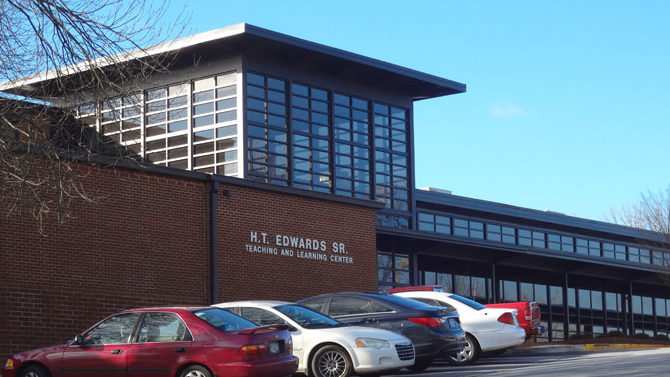 Students often walk back and forth between the H.T. Edwards campus off West Hancock Avenue, nearby Clarke Central High School and the West Broad Street School, where Classic City High School students work at an Athens Land Trust community garden, but most of the side streets in the neighborhood lack sidewalks.

The project “will make travel to and from our campus safer and more convenient for the many programs and groups that are housed here,” according to Commissioner Kelly Girtz, who’s also principal of Classic City High at H.T. Edwards.

Barrow Elementary, where 150 students and parents walk every day, according to the school’s PTA, is also getting pedestrian upgrades. Plans call for stamped and colored crosswalks at the Five Points intersection and across Pinecrest Drive, radar speed signs on South Lumpkin Street, a flashing school-zone beacon on West Rutherford Street, new LED streetlights and stop-for-pedestrian signs at the Ruthford-Lumpkin Street intersection and flashing crosswalk beacons on Lumpkin Street at Pinecrest Drive. They’ll cost a mere $25,000.

In Your Business: Alas, Flashback Games ran out of health points and closed its doors at 162 W. Clayton St Dec. 29. But it has more lives and moved on to another level in Loganville, of all places. The owners said on Facebook that they moved because the new location is within a half-hour drive of Athens, Covington, Conyers and Gwinnett County, and parking is free.

But do not despair, ye gamers. You can still drink beer while beating M. Bison in “Street Fighter II”! Another arcade for semi-grownups, Wonder Bar, had a soft opening last month at 240 E. Washington St.

As mentioned in Grub Notes (p. 9), franchise BBQ joint Saucehouse is taking over the old Peaches location at 840 W. Broad St. The building is being demolished and, because it’s more than 50 years old, the district commissioner, George Maxwell, had the option of delaying the demolition permit. But he approved it quickly last week, according to ACC senior planner Rick Cowick, paving the way for the restaurant to file plans for a new building soon.

Community Gardens: Cowick also said the ACC Planning Commission signed off Thursday, Jan. 2 on a proposed law allowing community gardens in residential neighborhoods. (Considered farms under the law, they’re mainly allowed in agricultural zones now.) Assuming the county commission approves it next month—and it’s already passed out of committee, so that’s a safe assumption—neighborhood residents will be allowed to come together to plant community gardens on up to one acre of vacant land, as long as they pull a permit and keep the property tidy. Unfortunately for the pro-chicken crowd, only plants, not livestock, will be allowed.

Get Involved: The Federation of Planets Neighborhoods is boldly going where no neighborhood has gone before—to Ciné. Starting Jan. 13, the citywide neighborhood association’s 7:30 p.m. meetings on the second Monday of the month will be moving from the old Prince Avenue firehall to the indie moviehouse. Park for free at the Athens Area Chamber of Commerce next door.

Federation meetings have always been a great way to keep up on the workings of local government, but they’re not as well attended as they once were. President Frances Berry says the organization will be announcing new plans for the new year at the next gathering. The goal, says Rick Kopp, who is handling the group’s communications, is to keep neighborhoods in all part of Athens abreast of local politics, not just the few (coughBoulevardcough) where people perpetually pay attention.

“The more people we get involved, the better it will be for everybody,” Kopp says.

Most Influential: Georgia Trend magazine released its rather predictable list of the 100 most influential Georgians earlier this month, and Athens was well represented. University System Chancellor Hank Huckaby, Secretary of State Brian Kemp, UGA President Jere Morehead, Community Newspapers Inc. President and University System Regent Dink NeSmith and DeKalb County School Superintendent Michael Thurmond are all influencing you as we speak. U.S. Rep. John Barrow is listed as living in Athens, although he moved to Savannah eight years ago and now resides in Augusta, until the Republicans re-district him out of there, too. Slightly less influential UGA Vice President for Public Service and Outreach Jennifer Frum and local writer Terry Kay earned honorable mentions.