The Gabrella Miller Kids First Research Act, named for a nine-year-old with an inoperable brain tumor, would provide $126 million in funding for pediatric research over 10 years. The bill, sponsored by Rep. Gregg Harper (R-MS) and highlighted by House Speaker John Boehner (R-OH) and Majority Leader Eric Cantor (R-VA) as an example of good bipartisan legislation, passed the House 295-102 on Dec. 11.

Rep. Paul Broun (R-Athens) was the lone Republican to oppose it.

His vote angered one of his constituents, Randy Russell, a University of Georgia employee who lives in Walton County, and rightfully so. His four-year-old son, Jake, has Ewing’s sarcoma, a rare bone cancer.

Russell said he wrote to Broun asking him to support the bill and received a form letter in response. Broun then called to apologize and say he’d do what he could. They even prayed together on the phone, Russell said.

Compounding the insult, from Russell’s point of view, is that Broun is a member of the congressional Childhood Cancer Caucus, whose mission is to “advocate in support of measures to prevent the pain, suffering and long-term effects of childhood cancers, and work toward the goal of eliminating cancer as a threat to all children,” according to its website. Russell has a different definition: “a feel-good panel that gives lip service to parents and activists.”

One of Broun’s staffers explained to Russell that “while Dr. Broun supported the cause of the bill, he did not believe this was the right way to accomplish this mission,” press secretary Christine Hardman told Flagpole. Broun took issue with the funding mechanism—redirecting revenue from a check-off box on tax returns that now finances presidential campaigns—because there’s no guarantee the funding wouldn’t one day be earmarked for some other “cause of the day,” which Hardman called “essentially fraud.”

Russell, for his part, said he can’t see any kind of back door that would allow the funds to go anywhere else.

The money is much-needed, he said. Only 4 percent of the National Cancer Institute’s research budget goes toward pediatric cancer, and that’s spread among just 12 families.

“The advancements are coming at an incredibly slow pace, due to the extreme lack of funding,” Russell said.

Jake is being treated with five drugs that are all at least 30 years old, and they’re the best ones available, he said.

Fortunately, Jake’s prognosis is “favorable,” Russell said. He responded well to chemotherapy and is learning to walk again after most of his tibia (in the lower leg) was removed in February and replaced with a cadaver bone. Others, though, are not so lucky. Cancer kills 1,545 children a year in the U.S.

“It is just unfortunate that our children have such a small voice in Washington,” Russell said. “I guess the reality is that Jake and others like him don’t vote.” [Blake Aued]

Less than a year after being hired as ACC’s new tennis instructor—replacing the privately-run Tennis for Life program—the Leisure Services Department dismissed Ann Flint on Dec. 6. While her bosses won’t go into detail, Flint said she felt set up to fail from the start.

Hired to run tennis programs at the new Southeast Clarke Park facility—which opened eight months behind schedule—Flint said trouble began brewing this fall, when Recreation Program Division Administrator Myla Neal reprimanded her for being “argumentative” and “combative.” Flint said she was given a “task list” to complete and began working on that as she was helping to open the new tennis center.

“We were told on [Nov. 15] we were to open the tennis center,” she said. “We kind of wanted two more weeks. We got the [certificate of occupancy] on the 15th, which meant I could move our stuff in. They said, ‘OK, we’re opening on Monday.’ Well, that happened about three weeks ago. The next thing I know, on the sixth of December, Myla comes in and says I’m terminated.” 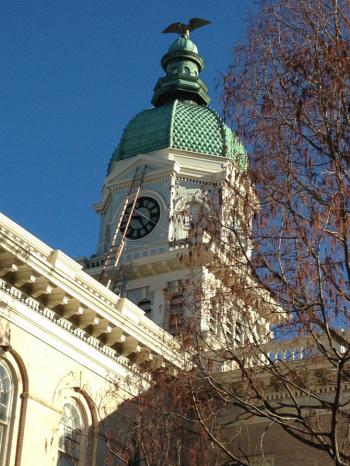 Since his sled can’t land on the dome, Santa devised this method to get to the City Hall chimney.

The change doesn’t affect the larger goal of the tennis center, which is to provide programming to a range of ages and abilities, Internal Services Division Administrator Kent Kilpatrick said. “We want children’s programming, we want adult programming, we want [the Clarke-Oconee Tennis Association] to set up their leagues,” he said. “That plan has not changed.”

While he couldn’t comment directly on Flint’s firing, “there’s always a lot of issues that lead into a larger issue,” he said.

Pat Sebring, athletic supervisor in charge of youth sports and facility supervisor for Southeast Clarke Park, said she hopes to fill the position by early February.

“I feel bad,” Flint said. “I was really comfortable, and I loved that little place and I watched it grow. It was just so exciting watching that new place come together, but things happen. I’m moving on.” [Kristen Morales]

New Year’s Resolutions: Since this issue went to press before Jesus turned 2,014, I don’t know what St. Nick brought our mayor and commission. But I did ask them what their New Year’s resolutions are, and the answers are below.

Harry Sims: Don’t get talked into running for commission again.

George Maxwell: Convince these fools in Boulevard to call me instead of trying to email or Twitbookgram or whatever. Don’t they know I’m 75?

Kathy Hoard: Maybe save a historic building or two for a change before I’m outta here.

Mike Hamby: Since downtown is the new mall, turn Atlanta Highway into the new downtown.