The Downtown Master Plan Heads Down the Stretch 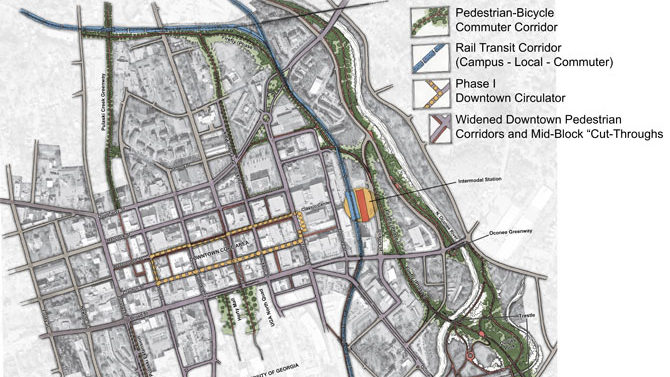 Jack Crowley is pulling your strings, twisting your mind and smashing your dreams. (Now you’ve got Metallica stuck in your head, right? You’re welcome.)

Crowley’s downtown master plan is limping toward the finish line, and it will twist your mind, because there’s a lot of cool stuff in there. But it remains to be seen if he can pull enough strings to actually get any of them accomplished.

The University of Georgia College of Environment and Design professor presented his kinda-sorta-almost final plan to the Athens Downtown Development Authority Tuesday, Dec. 10.

The most exciting aspects of the plan are transportation-related. While Crowley and his team dodged the thorny question of whether to close off College Square to cars, they are proposing widening the sidewalks on College Avenue to create a pedestrian promenade from the Arch to City Hall. East-west, Washington Street would be narrowed down to two lanes (and two ways, not one) with the extra space also devoted to wider sidewalks. And Clayton Street is already getting wider sidewalks as part of a SPLOST-funded infrastructure project set to begin in January. Jackson Street, too, would become more pedestrian friendly, with a linear park running up to Lay Park, where Crowley wants to build a baseball stadium. Likewise, part of Spring Street would also be reclaimed for pedestrians, providing another downtown-campus link.

Can’t walk? Don’t feel like it? Hop on the shuttle that would circulate along Hull, Clayton, Thomas and Washington streets.

Perhaps even more important than the ease of getting around downtown, getting to downtown would be easier, too. Walking across wide, busy streets like Broad, Oconee and Dougherty would become easier once medians are installed. If the Athens Housing Authority agreed—and they’re receptive, according to Crowley—Pulaski Street could be extended south past Broad Street to line up with Florida Avenue, replacing a connection lost when Hull Street was closed to make way for the UGA special collections library. Plus, Crowley joked, “most folks would probably like to get the word ‘Florida’ off the University of Georgia campus.”

Two already-planned projects, Firefly Trail and the Pulaski Creek Greenway, will provide foot and bike access from the Eastside and Newtown/Pulaski Heights, respectively. But Crowley’s plan goes even further. He’d extend Firefly Trail from Dudley Park through Lay Park and and connect it to the Pulaski Creek greenway and beyond, into the Boulevard neighborhood. It would run partially alongside the Norfolk Southern railroad through the Multimodal Center, which Walton County freight-line owner Bennie Ray Anderson is considering buying and leasing to the state and/or UGA for a passenger rail line and trail running alongside.

Such a network would allow thousands of people to leave their cars at home when they commute. “This is going to profoundly change how people get into the downtown,” Crowley said. “That is a huge, transformative project I think would be extremely important.”

Still left to be presented is the “cookbook,” Crowley’s collection of ideas for infill development, mainly replacing surface parking lots that are a poor use of valuable land. They’re merely ideas for private developers to mull over, though, he emphasized. “We’re not in any way, shape or form telling people what to do with their private property,” he told the ADDA board.

Officials have resisted creating a tax allocation district, or TAD, that would funnel property taxes from new downtown development into downtown infrastructure, like rebuilding the crumbling Murmur trestle as part of Firefly Trail. “I cannot emphasize enough how important this mechanism is in getting most of the public-sector improvements done, particularly on the east end,” Crowley said. Without a TAD, many of the improvements will have to wait until the next SPLOST in 2020 or beyond.

The ADDA will vote in February or March to send the plan on to the ACC Commission, setting up a potential showdown with Mayor Nancy Denson. ADDA Chairman Bill Overend will ask the commission to “adopt” the plan, while Denson wants the commission to merely “accept” it. The distinction is important: Adopting the plan means the commission intends to see it through, whereas accepting it is more akin to saying, “We got it, thanks,” without any commitment to actually implement it.

CHaRMed, I’m Sure: The ACC Commission is close to finalizing plans for a Center for Hard-to-Recycle Materials (CHaRM).

The center—most likely to be at the old incinerator location on College Avenue, though county-owned sites on Alexander and Willow streets are under consideration as well—will be a place to drop off things that you can’t just throw into your recycling bin. It will accept plastic bags, batteries, light bulbs, books, carpet, electronics, grease, paint, cleaning chemicals, mattresses, pallets, propane tanks, scrap metal, shoes, Styrofoam and tires.

The center will also house Keep Athens-Clarke County Beautiful’s teacher reuse store and a partnership with the University of Georgia to reuse construction debris like doors and windows.

A preliminary commission vote is scheduled for Jan. 6, but construction won’t start for another year because the police department is using the College Avenue building for an evidence room. A new evidence room is being built but won’t be finished for another year, Corley said.

Demolition Delay: Commissioner Kathy Hoard has spent months trying to figure out how to improve ACC’s demolition delay ordinance, which allows commissioners to temporarily stop a historic structure from being torn down in hopes that it can be moved or a buyer found who will preserve it. The law hasn’t saved a single building.

The law currently leaves it up to the district commissioner to inform residents of a demolition. Hoard’s Government Operations Committee tentatively approved several changes to the law Thursday, Dec. 11; among them, requiring a sign to be posted outside the building slated for demolition and sending letters to property owners within 400 feet. Commissioners who want feedback or to alert constituents now have to go door-to-door, and people often aren’t home (or maybe just don’t feel like answering the door).

“I just feel like this provides a better opportunity or guarantee of engagement for people affected by a proposed demolition,” Hoard said.

Right now, any building that’s more than 50 years old can be subject to demolition delay. The GOC wants to replace that threshold and, instead, limit delays to buildings that are designated as potentially historic in the county’s comprehensive plan.

What’s the difference? Well, a ton of houses in neighborhoods like Green Acres, Kingswood and Forest Heights are nearly or just turned 50 years old. Using the comp plan, rather than the 50-year line, would limit demolition delay to structures that are truly valuable historic resources. (Whether houses in 1960s-era subdivisions are truly historic is going to be an interesting debate one day.)

The commission is scheduled to vote Jan. 7 to send the revisions to the planning commission for approval. A final vote will likely be held in March or April, Planning Director Brad Griffin said.

69.5 percent of Clarke County students graduated in four years in 2013, two percentage points fewer than the state as a whole, according to the state Department of Education. In 2012, 71.1 percent of students graduated within five years, compared to 71.6 percent for the state. The county’s graduation rate was 66 percent in 2011, when the “cohort” formula was introduced.

Even more encouraging is the fact that Hispanic students, English-as-a-second-language speakers and economically disadvantaged students all graduated at higher rates in Clarke County than statewide. So did African Americans in the five-year measure, though not in the four-year one.