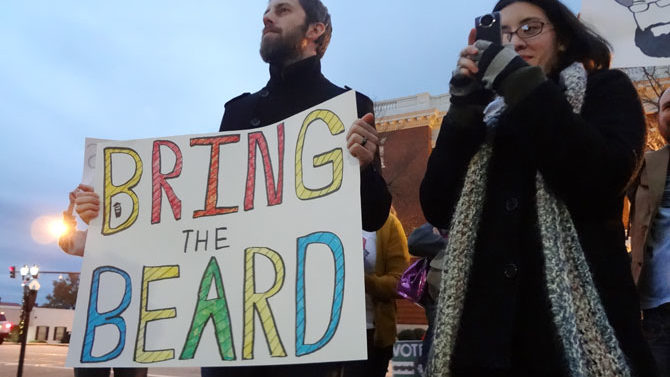 Reggie Thomas gets on the bus in East Athens, goes downtown and transfers to another line to get to his job as a manager at Chipotle, then does the same thing in reverse to get home. The round trip costs him $3.20 now, but if the Athens-Clarke County Commission approves a 15-cent fare hike and 25-cent transfer fee proposed by Athens Transit to cover an expected $320,000 budget shortfall next year, it’ll cost him an additional $4 per week.

That extra $4 might not sound like much, but for a person struggling to get by, it adds up. “It’s really going to hurt the poor community,” said Thomas, one of about 30 people who showed up for a public hearing on the proposed fare increase Tuesday, Nov. 19.

Paulette Howard said she relies on the bus to attend classes at Athens Tech. Her husband works, but sometimes has to walk so that she can afford to take the bus and get to class on time, she said.

Not only would the fare hike hurt low-income workers, it could also hurt Athens’ economy as a whole if people aren’t able to ride the bus to work or go shopping, BikeAthens Executive Director Tyler Dewey told commissioners at their Thursday, Nov. 21 agenda-setting meeting. “Making it more difficult to travel downtown won’t do local businesses any good,” he said.

A majority of commissioners said they’ll nix the idea of a transfer fee when they vote Tuesday, Dec. 3. “It’s not [riders’] fault they have to change from one bus to another bus,” Commissioner George Maxwell said. “It’s our fault” because of the routes the buses take.

They gave no indication, though, on whether they’ll accept the fare hike and how they would close the budget gap without a transfer fee. More tax money? Cut services?

Long-term, commissioners said they want to work more closely with University of Georgia Campus Transit to avoid duplication on Milledge Avenue, Prince Avenue and, when the new veterinary teaching hospital opens, College Station Road. “I wouldn’t be opposed to an outright merger if one can be achieved,” Commissioner Kelly Girtz said. “I’m not sure if it can.”

Athough Athens Transit Director Butch McDuffie dismissed this idea, commissioners also said they want to consider flat-fee passes to allow riders to board the bus as many times as they want for a day, a week or a month, which might be an attractive option for people making multiple trips a day.

“I want to do something to increase ridership, and raising rates doesn’t do that,” Commissioner Allison Wright said.

The Other Denson: Athens Occupier Tim Denson (who should officially be nicknamed “No Relation”) launched his bid to unseat Mayor Nancy Denson Wednesday, Nov. 20. Can he win? Probably not, but along with fellow upstart candidate Ryan Berry, at least he can raise issues like poverty, mass transit and development, force the mayor to articulate her positions and shift the debate.

And he’ll make the race a hell of a lot more entertaining. After all, we’re talking about the guy who stood out in front of the Arch dressed as candidate Charles Darwin after Rep. Paul Broun said evolution is “a lie straight from the pit of Hell.”

Demolition Delay: The ACC Commission passed a law in 2009 allowing commissioners to stop someone from tearing down a historic structure for 90 days so that, ideally, the building could be saved. Since then, commissioners have used that power 93 times. While a couple of structures have been moved, not a single one has been saved at its original location.

“Our intent was there, but the result has not been what we anticipated,” Commissioner Kathy Hoard said.

The commission’s Government Operations Committee, chaired by Hoard, started to take another look at the law Thursday, Nov. 21. Hoard said she has studied how other communities deal with unwanted demolitions but has not found a “silver bullet” solution. The GOC is just tinkering around the edges, for example, by making the modest signs alerting neighbors to impending demolitions larger and easier to read. They’re “a little too subtle, a little too tasteful,” senior planner Bruce Lonnee said.

Committee members discussed requiring both the mayor and the district commissioner to sign off on demolition delay but decided that would give the mayor too much power. Instead, the commissioner will make the call alone and face the consequences.

“If you demolish the house Thomas Jefferson slept in, somebody might not like that at the ballot box,” Commissioner Mike Hamby said.

Tennis Center: It only took nine years, but the new tennis center at Southeast Clarke Community Park on Lexington Road is just about finished.

As readers may recall, the SPLOST 2005 project was underfunded from the get-go (no money was allocated for land) and sparked a big fight a few years ago when county officials wanted to site the tennis courts at Bishop Park, displacing a multi-use field and basketball courts.

The center has 12 courts, a pavilion, restrooms, an office and meeting space and is open 9 a.m.–6 p.m. Mondays through Saturdays and 1 p.m.–6 p.m. Sundays, with plans to extend the hours next month. Registration for programming is underway; see athensclarkecounty.com/tennis for details.

Media Matters: The Athens Banner-Herald shook things up in the wake of longtime news editor Bill Stewart’s resignation and director of online content Joel Kight’s move to another Morris paper, the Jacksonville Times-Union. As Andrea Griffith-Girtz, formerly director of audience, recently announced in a corporate jargon-laden column, she is now community engagement editor, a job that seems more focused on marketing than journalism. Her old position—formerly known as executive editor—hasn’t been filled, nor has Kight’s. Former sports editor Chris White is now director of digital innovation, while assistant sports editor Rachel Bowers has moved up to sports editor. The big news, though, is that Red & Black editorial advisor Ed Morales is taking Stewart’s post on the copy desk.

The Morales hire was huge for the embattled ABH, but as for the rest of the moves, it’s a net loss of two more newsroom positions (on top of the 15 or so over the past five years) and a continued shift away from being a newspaper to… well, what?

Meanwhile, UGA President Jere Morehead may be taking aim at WUGA-TV. Former Grady College of Journalism and Mass Communication dean Cully Clark bought what was then the Toccoa CBS affiliate WNEG-TV in 2008 and moved it to Athens, and it quickly became a money pit. Things seemed to stabilize after the station laid off its professional news staff (students now do the nightly news) and signed a deal with Georgia Public Broadcasting to provide programming. Now Morehead has appointed a committee to look at the station’s finances, and it’s expected to report back in February.

New Provost: Morehead has named Pamela Whitten, the dean of Michigan State University’s College of Communication Arts and Sciences, to the No. 2 spot at UGA. She’ll take over Morehead’s old job—provost and senior vice president for academic affairs—from interim provost Libby Morris effective Feb. 1. The provost oversees instruction, research, public service and outreach, student affairs and information technology, as well as the vice presidents and deans for those areas, and reports directly to the president.

Whitten will also hold tenured faculty positions in the Grady College, the College of Public Health and the Franklin College of Arts and Sciences. She’s best known for her work in telemedicine—a field that provides long-distance health care to people in rural areas—and has worked for the University of Kansas in addition to Michigan State. She’s a graduate of Tulane University, the University of Kentucky and Kansas.