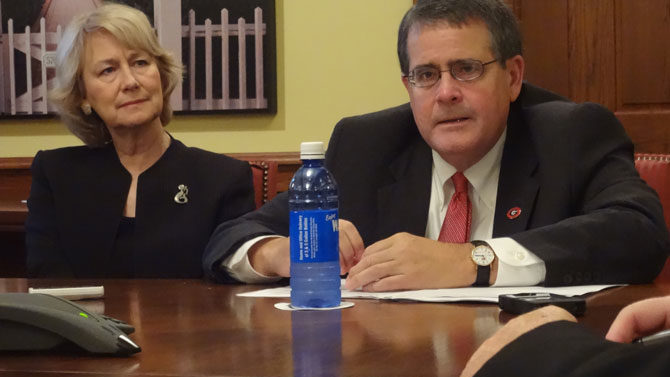 Most University of Georgia employees (football coaches and a few others excepted) have not had a raise in five years. President Jere Morehead is “cautiously optimistic” that might change next year.

Assuming a government shutdown or debt default doesn’t send the economy into a tailspin again, Morehead told reporters last week that he thinks there will be enough money in the state budget for pay increases.

Like his predecessor, Michael Adams, though, Morehead tacitly acknowledged that the university can no longer count on the state government for support. The retirement of chief fundraiser Tom Landrum will not stop his $1 billion capital campaign. He plans to tap the astounding 280,000 UGA alumni all over the nation, many of whom have thus far managed to escape the flurry of annoying fundraising pitches that stuff many graduates’ mailboxes.

“We’ve got a lot of people out there who’ve never been approached by the University of Georgia,” Morehead said.

Morehead will also be lobbying Gov. Nathan Deal and the legislature next year for a new $45 million science learning center. The Board of Regents approved the funding request last month.

In contrast to Adams, who was sometimes criticized for wanting nothing but the best regardless of cost, Morehead had the right tone when discussing the new building, saying it will be sited where it will cost the least money. “We want this to be a signature building for campus, but we don’t want anything that would be seen as extravagance,” he said.

The building will house labs and classrooms devoted to STEM (science, technology, engineering and math) disciplines. Which reminded me of Chancellor Hank Huckaby’s comment in June that “if you can’t get a job, and you majored in drama, there’s probably a reason.” (Full disclosure: I am a gainfully employed English major.)

Morehead smiled when I tossed him a question about whether the liberal arts are being shortchanged. “The chancellor has always been supportive of this institution as the flagship institution with a full array of majors,” he said. “Just because we desperately need a building to support STEM is not a sign we don’t support other areas of campus.” 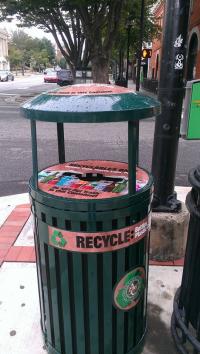 Downtown Recycling: Finally, you can recycle your Flagpole downtown after you read it. Last week, the Athens-Clarke County Solid Waste Department installed 25 of what will eventually be 32 recycling receptacles next to downtown trash cans. “They sprung up like little mushrooms downtown,” Waste Reduction Administrator Suki Janssen said.

There used to be recycling receptacles downtown, but Janssen had them removed because they weren’t being used properly. People were throwing too much trash into them, or throwing bottles into the ones for paper and vice versa. Then the county went single-stream, and now all recyclables go into one bin and are sorted out later.

Janssen estimated that 80-90 percent of the contents of downtown trash cans are recyclable. Conversely, about 5 percent of recycling is contaminated with landfill-bound garbage, but that’s not too big of an obstacle. How will Solid Waste stop people from tossing in a half-eaten burrito? “Breaking their fingers,” she joked. “We won’t… There’s no way to stop them.”

They’re a different color than trash cans, though, and prominently labeled. Solid Waste is also filming a public service announcement that’s a spoof of “The Walking Dead.”

The new receptacles cost $30,000 to buy and install, and were paid for out of last year’s budget.

Master Plan: Jack Crowley is back! Having taken a break to successfully guide the UGA College of Environment and Design through the reaccreditation process, Professor Crowley is putting the finishing touches on the downtown master plan, two months late. There will be one last drop-in session to explain what’s in the plan and gather feedback at 5:30 p.m. Tuesday, Oct. 29 at the Athens Area Chamber of Commerce.

Unfortunately, the delay (coupled with ACC officials’ reluctance to pursue the idea) means that a tax allocation district is out of the question for now. A TAD on downtown property could have funneled $20 million in property taxes on new downtown development into roads, sidewalks, trails and parks downtown. Once property values are reset Jan. 1, that figure will drop to about $8 million, Crowley said. The lack of funding means much of the master plan will have to be put off until the next SPLOST in 2020.

Broun Rowndup: While all of Georgia’s Republican Senate candidates supported Texas Sen. Ted Cruz’s quixotic quest to defund Obamacare by fake-filibustering a bill that defunds Obamacare, Rep. Paul Broun was the only one who went down to the Senate to literally stand with Cruz, tweeting the whole time.

People ask me all the time how Broun ever got elected. That’s how. He knows what the far-right base wants and how to give it to them. Those political skills make him a formidable candidate in a GOP primary.

Clap On, Clap Off: UGA will welcome Director of National Intelligence James Clapper on Wednesday, Oct. 15, when he’ll give an 11:15 a.m. speech at the Chapel. Clapper is President Barack Obama’s top national security advisor who lied to Congress in March about whether the National Security Agency was spying on millions of Americans’ phone calls and texts. Local libertarians and Occupy Athens are talking about protesting.

The speech is free but is only open to UGA students, faculty and staff, and a ticket is required. It will also be broadcast live on Channel 15 on UGA and Charter cable and streamed on the UGA website.

Boulevard Woods: The resident-driven pocket park on Barber Street has a cool new website designed by Krysia Haag. Check it out.