Selig Isn’t a Done Deal After All 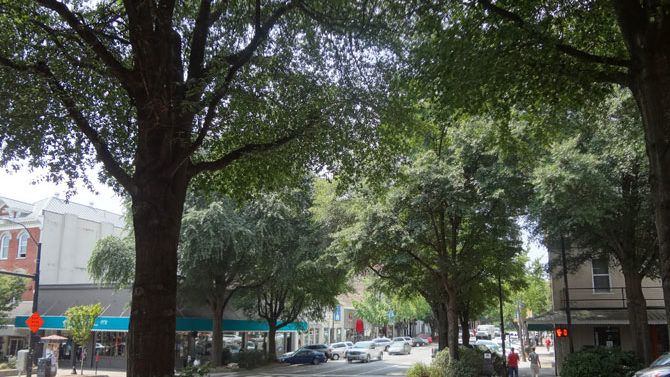 As I was headed down the hill to the Jittery Joe’s Roasting Co. for an iced coffee the other day, I noticed the construction equipment parked on the Armstrong & Dobbs property.

“Wow,” I though to myself. “Self, it looks like Selig is ready to go. Soon these cool graffiti-covered ruins will be gone and Selig City will be coming up all around the Flagpole office. It’s too bad I won’t be able to hit up American Apparel on my lunch break, though, because frat boys are taking over our building.”

But now comes word that the project is facing some kind of setback. It sounds as if the Atlanta developer is having some trouble with the money men, most likely involving financing for the residential component, but no one is saying much.

Spokesman Brian Brodrick of the local PR firm Jackson-Spalding denied that the project is “on hold” and said Selig still holds options to buy the property, but in response to an inquiry from Flagpole, he sent the following statement attributed to Selig Enterprises Senior Vice President Jo Ann Chitty:

“Over the past two years, Selig Enterprises has invested thousands of hours and more than $2 million in the Foundry at Broad project. In that time, there have been tremendous changes in the retail, residential and financial marketplaces.

“At this point, the project faces some significant challenges with costing and financing reflective of larger national trends… This is an important project for both Selig and Athens, and we will continue working diligently to try to bring Foundry at Broad to market.”

Brodrick said the company would have no further comment. Mayor Nancy Denson offered little additional information: “There have been some setbacks, but it’s moving forward.”

What kind of setbacks? “I didn’t ask,” Denson said. “It’s none of my business.”

Is this just a snag, or is the project in danger? Who knows—but note the word “try” in Chitty’s statement. It no longer looks like a done deal.

Maybe market forces are doing what the socialist townies could not. But if Foundry at Broad—that’s what the kids are calling it these days—doesn’t come to fruition after all the tears and ink that have been spilled, it’s not necessarily a cause for celebration. Something far, far worse could take its place.

The Next Big Fight: Athens-Clarke County is planning a $7 million SPLOST streetscape project downtown, and I can already tell it’s not going to make many people happy.

It will involve replacing water mains, building a stormwater system, repairing sewers and possibly upgrading private utilities like power, cable and Internet as well, according to project manager Derek Doster. That’s all necessary: the sidewalks are jacked up, Clayton Street has no drainage (a big contributor to the odor problem, as the garbage juice has nowhere to go), and broadband downtown is woefully inadequate.

Once the digging is done, sidewalks along Clayton, Jackson and Wall streets will be redone and spruced up with new benches, lighting and plantings. That’s all great, but some of the improvements are bound to be controversial.

The oak and ginkgo trees along Clayton Street will not survive the construction, ACC Landscape Management Administrator Roger Cauthen said at a work session last week; they’re five or 10 years away from dying, anyway. They will have to be replaced with four-inch-wide, 10- to 12-foot tall trees of a yet-to-be-determined species. More ginkgoes are out because they grow too slowly, their canopies are too large, and the females have a pungent smell (it’s impossible to tell them from the males), according to Cauthen.

I repeat: The trees on Clayton Street will be cut down. Don’t say you weren’t warned.

County officials also want to “bump out” street corners to create room for more benches and enclosures where businesses can leave trash and recycling rollcarts for pick-up. The bump-outs, plus wider sidewalks and more severe parking angles, would mean losing 29 on-street parking spaces, which never sits well with downtown merchants.

The enclosures are part of a plan to change how trash and recycling are collected downtown. Rather than drag bags out to the sidewalk and leave them to leak for hours, businesses would be required to place their bags in roll carts and pull them to the enclosures. Officials said the system would help solve odor and cleanliness problems downtown, but commissioners were skeptical of whether it would succeed, not to mention the aesthetics.

“We need a Plan B here,” said Commissioner Doug Lowry (who, for the record, would be opposed to Solid Waste saving a kitten from a burning house). “This isn’t going to work.”

It could work, though—if there’s enforcement.

The commission is scheduled to vote on the streetscape plan in November. Work would start in January and run until August—when it would pause so businesses are not inconvenienced during football season—then pick back up again in January 2015.

Buena Vista: As predicted, a century-old cottage that was left out of the Buena Vista Historic District last year has been demolished. Homebuilder Jared York took down the cottage at 167 Park Ave. last week.

York—the same guy who riled neighbors when he cut down a giant Talmadge Drive oak after promising not to—said during the contentious Buena Vista debate hat he had no intention of tearing down that house. Then, after the district passed, he filed for a demolition permit.

The Athens-Clarke County Commission left 167 Park Ave. and several other Buena Vista properties out of the district due at least in part to politics—the property owners didn’t want to be a part of the district, potentially threatening its passage. Preservationists feared the smaller district wouldn’t adequately protect the neighborhood.

Recent demolitions in Five Points prompted Commissioner Kathy Hoard to push for a stronger demolition delay ordinance. Mayor Nancy Denson said she would assign it to a committee next month.

The present ordinance allows commissioners to put a 90-day hold on demolishing buildings that are more than 50 years old, but the law hasn’t succeeded in saving any historic buildings.

“Really, all it’s done is delay the inevitable,” Hoard said

Prince Avenue: So, what’s up with that corridor study? Meetings and more meetings and meetings about meetings. The commission and the planning commission are supposed to have a joint work session to figure out how to proceed. Then maybe a consultant will be hired, and 18 months or so after that, something might happen. Don’t hold your breath.