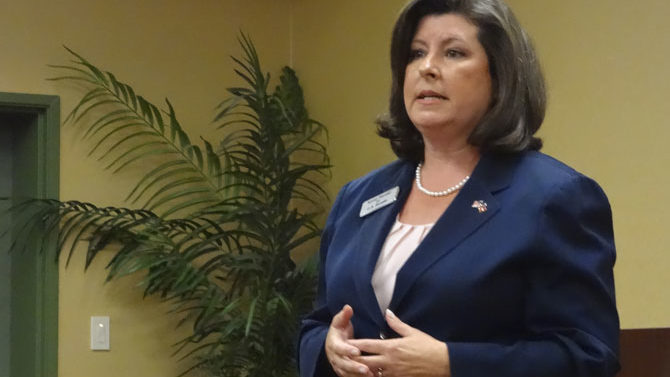 Anyone who was expecting former Georgia Secretary of State Karen Handel to be a moderate alternative in the Republican U.S. Senate primary, think again.

Handel spoke to the Athens GOP Monday, July 8, and fed the crowd of about 75 people plenty of red meat. She called for abolishing the IRS, criticized a version of the farm bill that includes funding for food stamps and said she is “a big proponent” of traditional marriage, wants to repeal Obamacare and that federal regulations are “literally choking (businesses) and preventing them from creating jobs.”

Apparently, Handel learned from her 2010 runoff defeat at the hands of Gov. Nathan Deal, who, along with his allies in the anti-abortion movement, bashed her over the head for her views on abortion (exceptions for rape and incest), and marching in a gay pride parade and funding Planned Parenthood as Fulton County Commission chairman.

After her loss, Handel took a job at the breast cancer foundation Susan G. Komen for the Cure and convinced them to disassociate themselves from Planned Parenthood. The move backfired. She resigned, wrote a book about the experience and now features it on her campaign literature, helping to bolster her standing with social conservatives.

The Athens GOP had already hosted two Senate candidates, Reps. Paul Broun  (R-Athens) and Jack Kingston (R-Savannah); another candidate, Rep. Phil Gingrey, is scheduled to speak Monday, Aug. 12, and David Perdue (Sonny’s cousin) has also been invited, according to chairman Matt Brewster. The meetings are at 6 p.m. the second Monday of the month at Country Inn & Suites.

Handel’s two main advantages are that she is the only woman in the race and the only well-known candidate who is not a member of this oft-loathed Congress—something she plays up in her stump speech.

“If you want new, dynamic leadership to shake things up and get things done, then I just might be the gal for you,” she said.

Although Handel worked with a Democratic majority on the Fulton County Commission, what she had to say last week sounded like just more of the same rigid conservative ideology that’s contributing to our national gridlock. But you can’t fault her. That’s what it takes to win.

GOP Convention: At the same meeting, newly-elected state party chairman and longtime Athens activist John Padgett announced that the Georgia Republican convention will be returning to the Classic Center in 2015, so get ready for another invasion of 2,500 aging white people.

Maybe the Democrats can follow suit and hold their convention in enemy territory, like, say, Forsyth County. It’s not known as the tourist destination Athens is, but then again, it’s not like the DPG really needs that big of a facility these days. A banquet room in a Cracker Barrel off the freeway should suffice.

Partner Benefits: Handel may have missed an opportunity to differentiate herself from other Georgia Republicans, show her leadership skills and get on the right side of history by embracing equal rights for all, as Republicans in other parts of the country are increasingly doing.

So has new University of Georgia President Jere Morehead. He told WGAU 1340 AM that the state will not allow UGA to use state money or the state employees at the UGA Foundation, which raises private donations, to provide health coverage to employees’ domestic partners.

“With the restrictions that the state has on its health insurance plans, I think we’ve gone as far as we can go on that issue here at the University of Georgia,” Morehead said. “I don’t see a path readily available for the institution to pursue that matter further.”

However, one advocate for domestic partner benefits, UGA professor Janet Frick, said she continues to talk to administrators and remains optimistic that a solution will be found. LGBT advocate Ricky Roberts took a more aggressive tack, starting a Change.org petition and accusing Morehead of “discrimination.” Visit Flagpole.com for a link to the petition.

Earmuffs: The precious cleanliness of our childrens’ ears will continue to be violated since Clarke County School Superintendent Philip Lanoue upheld his earlier decision not to remove And the Earth Did Not Devour Him from middle-school reading lists and media center shelves.

Lanoue had already upheld Tomas Rivera’s oft-praised Chicano coming-of-age story after two local parents complained that a frustrated migrant worker’s handful of F-bombs in a couple of paragraphs are inappropriate for seventh graders. (Trust me, your kids have heard worse.) The school board ordered him to reconsider, and he upheld the book again. Now the couple, Chad and Beth Lowery, are appealing to the state Board of Education.

Downtown Parking: No more fishing under your seat for change! The Athens Downtown Development Authority voted Tuesday, July 9 to replace more than 500 old coin-operated parking meters with new ones that accept credit cards and allow drivers to buy time using a smartphone app. Yes, there really is an app for that.

The Athens-Clarke County Commission will have to approve the purchase, but it looks like a foregone conclusion, since $250,000 in SPLOST money has already been set aside.

But the ADDA decided not to move forward with sensors that would detect when your car leaves a space and remove any leftover time from the meter. Not surprisingly, ending the possibility of finding the manna from heaven that is an unexpired meter didn’t sit well with the public, ADDA Parking Director Chuck Horton said.

If you don’t feed the meter and get a ticket, though, don’t worry too much about paying it for the time being. Horton is still barred from booting cars over unpaid tickets—sometimes thousands of dollars worth—while ACC Attorney Bill Berryman sorts out concerns about due process. But the issue should be resolved soon, Horton said, and he’ll be back to his usual boot-happy self.