City Dope: The Race to Replace Saxby Is On 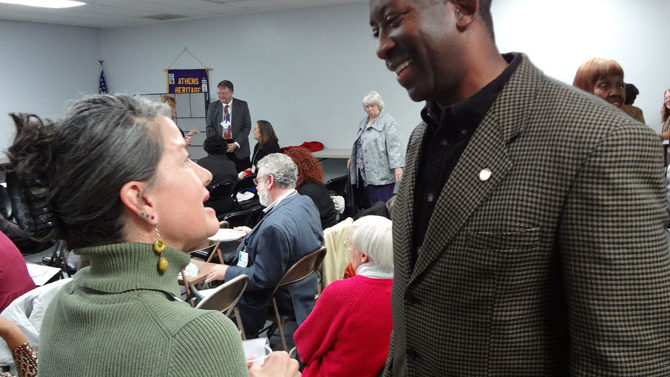 Sen. Saxby Chambliss sent Georgia politicos into a tizzy Friday when he announced that he wouldn’t seek a third term in 2014. He’s now free to work on a deal addressing the national debt—his pet issue—without worrying about the political ramifications, like a tea party primary challenge. He also set off a mad scramble to claim his seat.

Speaking at the University of Georgia on Monday, Chambliss said he had no doubt he would have won re-election. ButnNow that the incumbent is out of the way, it’s a virtual certainty that our very own Rep. Paul Broun will be among the contenders.  “I’d be shocked if Paul Broun and Tom Price didn’t jump into this race immediately,” GOP consultant Joel McElhannon said Friday.

Don’t count out Broun. Even though wide swaths of the voting public believe he’s a buffoon, he’s been subsisting on a steady diet of better-funded, more moderate Republicans for the last six years. “This would be the perfect time for Congressman Broun to make a run for the Senate, a lifelong dream of his,” said his former campaign spokesman and treasurer, Public Service Commissioner Tim Echols. “Broun’s campaign work ethic is unsurpassed, and he really connects with voters. Add to that the fact that he is a medical doctor and a Marine, and you can see why conservative Republicans love him.”

Of course, there will be plenty of competition. Every Republican from the statehouse on up is looking in the mirror right now and fantasizing about being a U.S. senator. Tom Crawford runs down the list of potential candidates on page 5.

On the other side of the aisle, one intriguing candidate would be  former Athenian Rep. John Barrow (D-These Are My Guns), the one Georgia Democrat who’s proven he can  win in a red district.  If the Republican nominee is too far right, Democrats could pick up the seat, like they did in Indiana and Missouri last year.  Barrow has no plans to run “at this time,” his spokesman told Flagpole.

Of course, all this speculation would be moot should the formidable Pete McCommunist toss his beret into the ring. “I am greatly appreciative to all those who are urging me to run for the United States Senate, to succeed the Hon. Saxby Chambliss,” McCommunist said in a statement. “I must say, however, that any such speculation is highly premature. Let me just say that my advisers and I will be following the situation closely, and at the end of the day, when it is time to move forward, I will do what is best for Georgia.”

REDISTRICTING: Speaking of Barrow, he recently introduced a bill that should be of particular interest to Athens voters who’ve been sliced and diced into all kinds of crazy districts designed to elect Republicans in places Democrats ought to win.

The John Tanner Fairness and Independence in Redistricting Act would set up nonpartisan commissions to draw new district lines and prohibit changing those lines except after a census. Barrow says the current partisan redistricting process is silencing moderates in favor of extremists.

He’s right. Redistricting is about the party in power taking even more power. In Georgia, for example,  two-thirds of the state legislature and 10  of 14  congressmen are Republicans, even though about  45 percent of the state is Democratic. Athens is more than 60 percent Democratic, but four-fifths of our delegation to Atlanta is Republican. And in  lopsided  districts, candidates have to worry more about primaries than appealing to the center in a general election.

New maps are drawn every 10 years. But the state GOP has—over our objections—changed Athens’  lines mid-decade in an attempt to oust Barrow in 2004 and to ensure state Sen. Bill Cowsert’s election in 2006. Cowsert, to his credit, introduced a bill to create a nonpartisan redistricting panel at the state level, but it never even got a committee hearing, even with the support of then-Gov. Sonny Perdue. Barrow’s bill probably  stands about the same chance.

OVER HEARD:  Clarke County Democrats may have ousted former state Rep. Keith Heard in favor of Spencer Frye last year, but in a classy move, they honored Heard for his 20 years of service at a reception last Thursday. The location was Multiple Choices—a nonprofit that serves disabled Northeast Georgians—a fitting spot given Heard’s lifelong commitment to social services. “I always tell people, ‘You might be an accident away, a stroke away from needing these services,'” he said. And it’s true.

Heard helped preserve Multiple Choice’s $141,000 grant (“We serve 10 counties,” executive director Bill Holley said. “You do the math.”) when it was on the chopping block. Such expenses are the “low-hanging fruit” of the budget process, said Heard, who served on the Appropriations Committee.

ADAMS UNCHAINED: UGA President Michael Adams gave his final State of the University address last Thursday before he retires in June, and he didn’t hold anything back. In addition to listing his accomplishments and offering advice to his successor—including to rein in the football program—Adams accused some in the Athens community of expecting too much from the university financially at a time when money is tighter than ever in his 16-year reign. “Some have forgotten that the University of Georgia is a charity, not a donor,” he said.  And the frequent grumbling that UGA keeps too much land off the tax rolls is creating ill will among the state legislators who send $400 million in tax revenue our way every year, he said. Click here for more on Adams’ comments.